News
Learning Curve
MinnPost's education reporting is made possible by a grant from the Bush Foundation.
Oct. 5, 2015

St. Paul, that land of civic milk and honey, has lately been embroiled in an uncharacteristically fierce controversy over the direction of its school system. At the core of the dustup is whether Superintendent Valeria Silva’s race equity strategies are working.

The nuances of this debate are particular to St. Paul, but the larger issue is quickly becoming the new framework for conversations about education nationwide. Everyone in the sector, it seems, has their vision of how to address institutional racism.

Which raises a big and fundamental question that will only become more relevant as federal and district-level policies increasingly target equity. Though we know, in remarkable detail, how racial and socioeconomic inequities foil student learning, how will we know whether confronting bias in the classroom translates to greater academic achievement? Particularly when the yardsticks we typically use to measure achievement are geared toward children who are white and affluent?

A direct line from adult awareness to student growth

Which brings us to Como Elementary. In an urban core dominated by high poverty schools, the St. Paul school stands out as exceptionally diverse. Nearly half its 491 pre-K to grade 5 students are Asian and one-third are black. Latinos and Whites make up 9 percent of the student body each, and the remaining 3 percent are American Indians.

The school’s teacher corps is more diverse than most as well, with people of color comprising 20 percent of staff.

For the last five years the percentage of Como’s students who score at grade level on state tests in reading, math and science has stayed relatively constant, hovering between 46 percent and 49 percent. There are caveats involving changes in the tests, but overall it’s fair to that say sheer, crude proficiency is flat.

The most visible and polarizing pillars of St. Paul’s approach to race equity are, first, a push to return students with behavioral challenges to mainstream classes and keep them there; and, second,  a push to expose every adult in the system to training on white privilege and its impact on the classroom.

As in other communities where the twin strategies have been rolled out, opposition has galvanized around them with parents and teachers frustrated with classroom disruptions. A second consecutive year of lackluster academic scores has bolstered claims that the approaches aren’t working and fueled a teacher-union-led campaign to elect a new majority to the school board.

Como Principal Christine Vang tells a different story. Her staff charged into the controversial “courageous conversations” about race four years ago and she says today she can draw a direct line from increased adult awareness to student growth.

Over the last two years test scores at the school have grown by 20 percent overall. More impressive, growth by each demographic student group has outpaced students statewide.

The state Department of Education tells schools how many of their students are making small, medium and large gains. The lion’s share of Como’s pupils are making large gains. 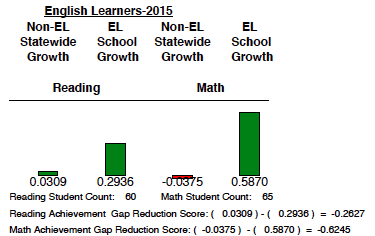 Courtesy of St. Paul Public Schools
Compared to students starting at the same point in other schools, Como’s students’ scores — for example, of English Language Learners in the chart above — are going up further and faster.

Joe Munnich is St. Paul’s assistant director of Research, Evaluation and Assessment. Compared to students starting at the same point in other schools, Como’s students’ scores are going up further and faster, he says.

“If you have students two or three levels behind making high growth, that won’t show up on the MCAs,” the Minnesota Comprehensive Assessments, Munnich says. “What’s really remarkable is how many students you see in the last three years moving up toward proficiency.”

Vang has been principal at the school for nine years. Her staff has a wealth of expertise in curriculum and learning. And there are very specific tactics they use in the classroom that are likely helping achieve that growth.

But the work didn’t really take off until she and her staff adopted a framework for talking about everything from bell times to disruptive students that they came up with after going through the district’s race equity training. Hard though it may be, teachers are now able to discuss race explicitly as they collaborate.

A small example: Teachers now sometimes use “call and response,” a strategy where they call out questions and instead of raising their hands students shout out answers.

The idea of a gaggle of kids blurting out in unison is anathema to many lovers of peaceful classrooms. But the rapid-fire interaction can engage every student, including those who aren’t likely to raise their hands. And as the teacher calls out successively more challenging questions, students collectively build on the original answer. 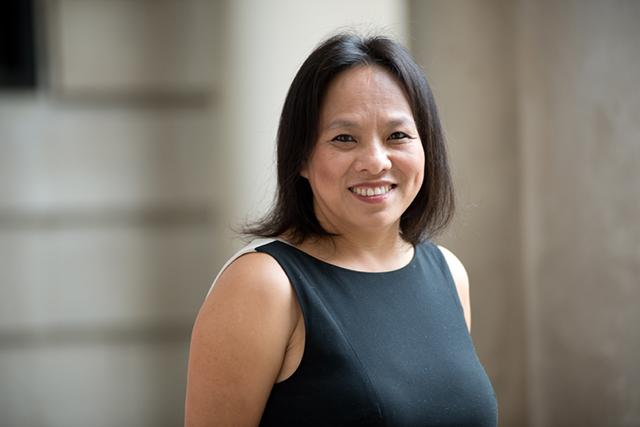 In talking with teachers about the exercise, Vang explained to her staff that as a Hmong girl and an English language learner in school, it was hard for her to put herself out there in class discussions. The playful whole-group exercise would be a more comfortable way for her to participate.

“It really opened up when I was able to tell my narrative of who I was and where I came from,” she says. And it allowed the staff to begin to tell their own stories.

“Often white teachers think they don’t have a story,” Vang explains. “We talk about white as a color. It allows everyone to get to know who they are and to get to share their story of the culture and the race they grew up in.”

Teachers are able to talk about race — their own and others’ — during team meetings where student outcomes are studied. This makes it easier, for instance, to discuss a student who isn’t engaged and what the adults might do differently to reach them.

Like other St. Paul schools, three years ago Como created an equity team that took ownership of advancing conversations about race. By creating a universal framework for the talk, the teams have been able to have an impact on all kinds of decisions where race was not previously thought to matter.

Ending the ability to predict outcomes

Two years ago some teachers went a step further and created Collaborative Action Research Equity, or CARE teams that have a more intense focus on engaging individual students in culturally relevant ways.

CARE team members visit each others’ classrooms and share individual student data, as well as thoughts about why a lesson might not seem relevant to a particular child, given his or her culture — how is the lesson connected to the students?

The teachers on the CARE team say they see the work making a difference, something Vang says is reflected in classroom-level data.

Academic growth is crucial, say district leaders, but there are a number of other indicators they use to decide whether the race equity strategy is working. They start with the premise that no student should be more than twice as likely to experience a particular outcome than any other student.

Accordingly, St. Paul tracks disproportionality in referrals to gifted and talented programs and special ed, and suspension and attendance rates. When they began calculating these “equity ratios,” they found African American students were 14 times more likely to be suspended than whites. White students, meanwhile, were four times more likely than blacks to be identified as gifted and talented.

“In public education in particular most people believe poverty is the issue,” says Chief Executive Officer Michelle Walker. “It is an issue, but even when we consider poverty we have racial inequities.”

So much so, she adds, that if you tell her the race and in some cases the gender of a child she can likely predict their outcomes. The end goal is for this to no longer be true.

It’s crucial to make time and space for teachers to understand how their own race and culture impact their practice, says Vang. The better they know themselves, the more reflexively they can begin to account for students’ backgrounds in the countless little-examined decisions they make every day.

“We teach who we are,” says Vang. “If I was a Hmong teacher getting up in front of a classroom, I teach who I am. As simple as it sounds, it’s really hard.”

Race, equity and the lessons of St. Paul’s Como Elementary