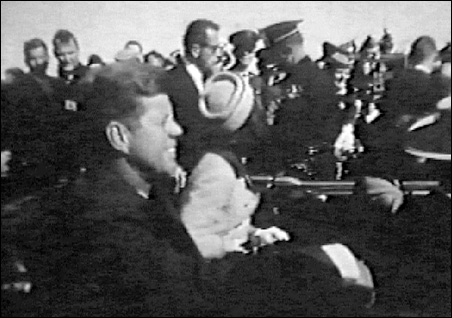 Sunday marks the 46th anniversary of the assassination of John Fitzgerald Kennedy, the 35th president of the United States and, in many ways, a transitional political figure who captured the imagination of a nation and, in the process, became an iconic pop-culture symbol.

In fact, Kennedy became the first truly media president, owing his election in part to the first televised presidential debates. Although it’s not clear that it tipped the election, Kennedy’s performance in the four televised debates — or, rather, Richard Nixon’s generally poor showing before the cameras — helped shore up his support, historians believe.

Once he was in office, media attention helped him and first lady Jacqueline Kennedy personalize the presidency and charm much of the public with family-life scenes that made their children — “sweet” Caroline (courtesy of Neil Diamond) and John Jr. — familiar faces in the nation’s living rooms.

Then, in a rare glimpse inside the White House, the first lady invited everyone in for a prime-time personal tour during a memorable Valentine’s Day, 1962, broadcast.

In many respects, the First Family was idolized during the three brief years of Camelot — a title Jackie herself bestowed on the Kennedy years, noting JFK’s love of the popular Broadway musical. That “brief, shining moment” was captured wonderfully in this Life magazine photo showing an illuminated Kennedy.

And you know you’re living the royal life when you get 45th-birthday greetings from the likes of Marilyn Monroe.

Members of the First Family found themselves being marketed, too, featured in all sorts of political memorabilia and even commercial products, including their own set of paper dolls, starting a tradition that carries on today.

Despite all the adulation, they were teased a bit, too — though rather gently — in an era before TV turned to the kind of political satire that began with 1964’s “That Was the Week That Was.” Since then, presidential foibles have become staples of topical humor for the likes of “Saturday Night Live” and the nightly barbs of a Jon Stewart or Stephen Colbert. And these days, such celebrity TV tabloid shows as “Entertainment Tonight” and “The Insider” feast nearly daily on the Obamas’ every move or all the hoopla surrounding Sarah Palin.

Commercially, the most successful Kennedy satire came from comedian and impersonator Vaughn Meader.  At the time, his 1962 comedy album, “The First Family,” became the fastest-selling album in U.S. history. Meader’s brief fling with fame, however, ended abruptly the following year with Kennedy’s assassination, when the performer quickly became, in his words, “a living reminder of tragedy.”

The music industry offered several other musical salutes, and I’ll wrap up with three JFK tribute songs that all turned into Top 10 hits.

The first one — complete with a couple of politically incorrect references — was Jimmy Dean’s “P.T. 109,” a 1962 tribute to JFK’s World War II heroism in helping rescue injured crew members when their boat was cut in two by a Japanese destroyer. (Jimmy even works in a clever homage to his earlier mega-hit, “Big Bad John.”)

The other two songs — versions of “Abraham, Martin and John” — came after his death (and linked him with another president, Abraham Lincoln, and civil rights leader Martin Luther King Jr.). Five years after Kennedy’s death and just months after the assassinations of King and Bobby Kennedy, Dion recorded the original hit version.

It’s been covered many times since, but none as effectively as the 1971 version put together by a DJ named Tom Clay. He combined two hit songs with audio news clips to produce a tribute that still packs an emotional punch nearly three decades later.

And the video version below for Clay’s “What the World Needs Now Is Love” / “Abraham, Martin and John” intensifies many of those feelings.