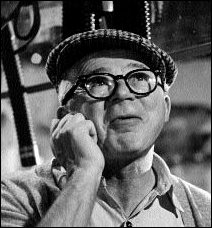 Eight years ago next week, the nation — and the film world — lost Billy Wilder, an amazing triple-threat movie powerhouse and my nominee for America’s greatest director.

His life has all the drama of one of his many memorable movie scripts.

Samuel “Billy” Wilder, 95, died of pneumonia in 2002 — 73 years after he broke into the film business as a screenwriter in Berlin, Germany, several years before Hitler’s rise quickly sent him packing. Knowing his Jewish ancestry would cause problems, the native of Austria-Hungary immediately moved to Paris.

He eventually worked his way to America (a riveting story itself that Billy relates below). Here, of course, he became equally adept at writing, directing and producing some of our nation’s most memorable films.

He was nominated eight times for best director (the second highest total, behind only William Wyler, in Oscar history), winning twice in that category and accumulating six Academy Awards in all.

He’s among a small group of prestigious directors who, on only seven occasions, won Oscar’s triple crown for Best Picture, Best Director and Best Screenplay (Original/Adapted) for the same film (an honor he shares with Minnesota’s Joel and Ethan Coen, who achieved the feat with their 2007 film “No Country for Old Men”). Wilder won his Academy Award trio for the 1960 Jack Lemmon-Shirley MacLaine movie “The Apartment,” which happens to be my all-time favorite film.

From the late 1930s to the early 1960s, Wilder directed a wide range of films, represented nicely in this movie sampler.

The list includes two journalism movies — 1951’s cynical “Ace in the Hole,” starring Kirk Douglas, who would do anything (and does) to further his career, and the 1974 remake of the classic screwball comedy “The Front Page,” one of seven movies he made with favorite actor Jack Lemmon.

Four of Wilder’s films ended up on the American Film Institute’s list of the Top 100 films (PDF):

No. 93: “The Apartment” (1960) — The great ensemble cast stars Lemmon as a low-level corporate drone who suddenly finds his career on the rise in direct proportion to how often he lets top executives use his convenient apartment for their trysts. It also stars MacLaine and Fred MacMurray (in one of his classic “cad” roles as the uncaring executive “Mr. Sheldrake,” a name Wilder liked so much that he used it again in two other films, “Sunset Boulevard” and  “Kiss Me, Stupid”). The plot hinges on these two scenes — “before” and “after” — when “Bud”  discovers it’s the woman he secretly loves that MacMurray is taking to his apartment.

No. 38: “Double Indemnity” (1944) — Wilder co-wrote this classic film noir with the great Raymond Chandler. It’s another film starring MacMurray in another great cad role. Here, Wilder talks about mulling the use of an alternate ending to the film, but he made the right call sticking with the ultimate “role reversal” closing scene with a cigarette.

No. 14: “Some Like It Hot” (1959) — Wilder’s highest-rated comedy (with Lemmon, of course) brought him together with Marilyn Monroe for a second film. Wilder often commented about working with the temperamental, seldom-punctual Monroe, once describing her as “an endless puzzle without any solution.” And again: “My Aunt Minnie would always be punctual and never hold up production, but who would pay to see my Aunt Minnie?”

No. 12: “Sunset Boulevard” (1950) — Wilder fell just short of the Top 10 with his cynical look at the way Hollywood uses and discards people. Over the years, the film has inspired more than its share of parodies of its iconic scenes, particularly Gloria Swanson’s faded-film-star role of “Norma Desmond,” including this wonderful Carol Burnett sendup.

Now, that’s a career of entertainment!

In his long Hollywood career, honors for Wilder kept piling up: Entertainment Weekly named him the 24th Greatest Director of all time, the Film Institute gave him its Life Achievement Award in 1986, and he received the National Medal of Honor in 1993.

On March 28, 2002, the day after his death, the influential French paper Le Monde headlined its front-page obituary “Billy Wilder is dead. Nobody is perfect” —a classic reference to the last line of “Some Like it Hot” — “Well, nobody’s perfect” — considered one of the best closing lines of all time.

Wilder’s tombstone, by the way, bears the words: “I’m a writer but then nobody’s perfect.”

All in all, not too bad a career for a guy who spoke no English when he first arrived in Hollywood.

In 1988, when he accepted the Irving G. Thalberg Memorial Award, the Academy Awards’ most prestigious honor, he told the dramatic story of his touch-and-go entry to the country before finally gaining permanent residence in the United States. It’s well worth watching this legendary storyteller at work as he vividly recounts the incident in this video clip (starting at the 2:25 mark).