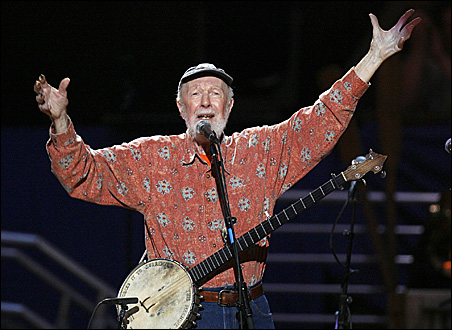 To mark this important occasion, I want to offer an admittedly small and totally inadequate — but heartfelt — tribute to an American treasure, Pete Seeger, who turned 91 earlier this month.

It was a great privilege over the years to see him perform twice and to introduce my older daughter, Laura, to his music and message at an outdoor concert on St. Paul’s riverfront way back in the mid-’80s when she was 6 or 7.

For most of the last century, Pete Seeger’s life has run parallel to major moments in the nation’s history as he and his wife, Toshi, lived a simple life that purposely avoided many of the trappings of fame.

His music, likewise, has provided an emotional  soundtrack for much of the nation’s major social and political upheaval of the 20th century — the rise of the union movement, the McCarthy blacklisting disgrace, the folk music era, the civil rights movement, Vietnam anti-war efforts and the environmental movement, among others.

Over the years, one of his amazing talents has been his ability to get even the shakiest of singers in the audience to belt out the tunes with him. Just listen to any of his live performances below.

A short capsule of this remarkable man’s first nine decades:

• He was born in 1919 in New York to a musical family that included his father, Charlie, a musicologist, his violinist mother, Constance, and musician siblings, Mike and Peggy.

• He studied journalism at Harvard University for two years before abandoning college for his music.

• He met up with the legendary Woody Guthrie in the late 1930s, playing at a benefit concert for migrant workers. In early 1941, the pair formed the influential Almanac Singers, the forerunner of the immensely popular — and the even more influential — Weavers, whose short-lived four-year run was derailed by the blacklisting furor and political witch hunts of the McCarthy Era.

• He went solo in the late 1950s and proceeded to give America some of its most-cherished songs: a reworked version of the African-American spiritual and eventual anthem of the civil rights movement “We Shall Overcome,” the folk classics “If I Had a Hammer” and “Where Have All the Flowers Gone” and the biblically based “Turn! Turn! Turn!”  — explained here by Seeger himself.

Two extraordinary documentaries — “Wasn’t That a Time!” (probably my all-time favorite doc film) and PBS’ “The Power of Song” — offer glimpses of his many humanitarian efforts and his respect for all social classes and world cultures.

Despite all the political lumps he’s taken along the way, Seeger has been honored many times, including the prestigious National Medal of Arts and Kennedy Center Honors. Now there’s a campaign to nominate him for the Nobel Peace Prize.

Last May, on the occasion of his 90th birthday, friends and musical admirers gathered at Madison Square Garden for a tribute concert and celebration, which has been featured numerous times in recent months during public television’s pledge drives.

What has he meant to the nation’s music and to its social causes?

Too much for me to capture in any organized way, but here’s just a small smattering of a few of the musical moments — arranged by topic — that I think offer some insights into his philosophy and moral character:

• Uniting all ages: Just about any adult can related to the unavoidable “aging process,” but few make it as understandable, witty and empathetic as Pete does in “Get Up and Go”:

I get up each morning and dust off my wits
Open the paper and read the obits
If I’m not there, I know I’m not dead
So I eat a good breakfast and go back to bed.

• Feminism and equal rights:  His performance of the marvelous song his sister, Peggy, wrote, “I’m Gonna Be an Engineer,” neatly combines gender and union politics.

• The environment: From the foreboding  (“Garbage”) to the inspiring (“My Dirty Stream”), Pete makes his point about mankind’s responsibility to the natural world and to each other. And he’s lived the life he advocates, most clearly with his Hudson River cleanup campaign and the annual Cleawater’s Great Hudson River Revival.

• Peace movement: Censorship and the nation’s anti-war sentiments crossed paths in 1967, when CBS originally stopped Pete Seeger from performing on “The Smothers Brothers Comedy Hour”  “Waist Deep in the Big Muddy,” which used a World War II incident as a metaphor for the military and governmental blundering in Vietnam. The network finally relented, producing this riveting performance.

• Free speech: What better way to end than with a verse from “Bring ’Em Home,” another combo pro-patriotism/anti-war song that sums up a consistent life-long message from Pete Seeger?

Join me, if you care to, in wishing a happy birthday to Pete Seeger.