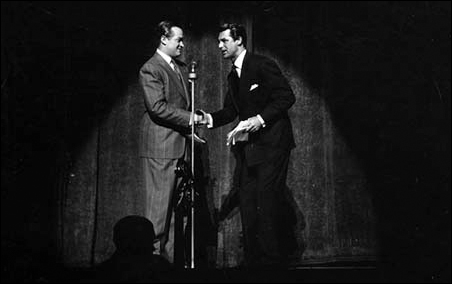 Minneapolis Star Journal/Minnesota Historical Society
Bob Hope and Cary Grant in the Army-Navy Relief Show at the Minneapolis Auditorium in 1942.

Cary Grant, in response: “So would I.”

So goes the story about arguably Hollywood’s most debonair leading man ever. Archibald “Archie” Alexander Leach, known to the world by his stage name, died 25 years ago this month at age 82.

In between, he earned two Best Actor nominations (for “Penny Serenade” in 1941 and “None But the Lonely Heart” in 1944) and five Golden Globe nominations. But he never won a major acting award — until 1970, when Frank Sinatra presented him an Honorary Oscar for Lifetime Achievement “for his unique mastery of the art of screen acting with the respect and affection of his colleagues.” He also was honored in 1981 by the Kennedy Center for his career achievements. 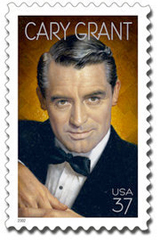 In 1999, the American Film Institute named him the second-greatest Male Screen Legend (finishing right behind some guy named Bogart). And he ended up on a U.S. postage stamp.

On the personal side, he led a busy life — he was married five times, was widely regarded as bisexual and dabbled in the early ’60s with LSD (while it was still legal). He said the hallucinogenic drug brought him an “inner peace” that he hadn’t found with such things as hypnotism, mysticism and yoga.

A couple of the many interesting pieces of trivia about him:

• Ian Fleming reportedly based in part his James Bond character on Grant, and the actor turned down the chance to play the first 007 in 1962’s “Dr. No” because he thought he was too old at age 58. Here’s a fun look at the “action side” of Cary Grant, set to — what else? — “The James Bond Theme.”

• Despite every impersonation ever done of him (even Goober on “The Andy Griffith Show” — yuck!), he never said, “Judy, Judy, Judy,” in any film. However, he did say, “Susan, Susan, Susan,” in one of my favorite films, the 1938 screwball comedy “Bringing Up Baby.”

And believe it or not, Grant was a regular visitor to the Twin Cities.

He was here in 1942 as part of the World War II Hollywood Victory Caravan with the likes of actresses Olivia de Havilland, Joan Bennett, Joan Blondell and others.

Then, from the late ’60s to the early ’80s, he was here for business meetings, serving on the board of Faberge. One of its divisions — Rayette Inc., which made hairsprays — was headquartered in a 1909 building in St. Paul’s Lowertown. (Faberge closed its last St. Paul Rayette facility in 1983.)

Here’s a quick-hit look at a few of my (many) other Cary Grant favorites (including a couple of his four film collaborations with Alfred Hitchcock):

• How about Hitchcock’s “North by Northwest,” with the famed crop-dusting scene and his racy (for the times) dialogue with Eva Marie Saint?

• And one more Hitchcock classic, “To Catch a Thief,” including a sexy kissing scene with Grace Kelly that offers lots of fireworks.

• Not to mention one of his biggest weepers: “An Affair to Remember,” with the famous Deborah Kerr setup scene.

• There’s also this classic — but controversial — scene from “The Philadelphia Story,” with Mr. Grant “roughing up” Katharine Hepburn.  The film was later remade as a musical, “High Society,” filled with great Cole Porter songs.

There are plenty more, including “Arsenic and Old Lace” and “His Girl Friday” (a gender switch on the multi-version “Front Page” classic), but let’s wrap up with one of my favorites, “Charade,” with its great musical score and the witty repartee of its opening scene.

And, oh yeah, it also has that romantic Paris river cruise on the Seine. I’m there, man.