The unemployment rate remains stubbornly high, both nationally and locally. Last Friday’s national employment report confirmed that the unemployment rate has hovered around 9 percent throughout 2011. This is better than the 10.1 percent peak unemployment hit in October 2009, but a far cry from the 5 percent rate at the beginning of the recession in December 2007.

The Minnesota data tell a similar story. Starting at 4.7 percent in December 2007, unemployment rose to 8.5 percent in June 2009, and then fell over the next year to roughly 7 percent, where it has remained ever since.

What’s going on? Part of the answer lies with a simple statistical relationship developed by an economist who died too young.

“John F. Kennedy came to the White House without a settled economic agenda or ideology,” according to Robert Solow and James Tobin, who both served as economic advisors in the Kennedy administration. Instead, JFK turned to a group of economists led by Walter Heller of the University of Minnesota. These men, in turn, educated the president in the basics of macroeconomics as it was then practiced and studied.

Heller and his team had a ready prescription for increasing economic growth: stimulate the demand for new equipment through an investment tax credit. This policy would pay off in both the short run by raising short-term growth rates and in long run by increasing the stock of productive capital.

The big question they faced was: How much faster did the economy need to grow in order to reduce the unemployment rate?

Professor Okun goes to Washington
Thirty-two-year-old Arthur M. Okun joined the President’s Council of Economic Advisors staff in 1961. He had been a professor at Yale University since 1952, and when his colleague James Tobin became a member of the council he asked Okun to come with him. 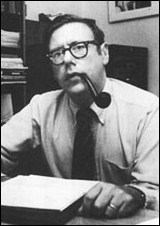 The job of figuring out how much faster the economy needed to grow fell to Okun. He knew that earlier studies found a link between economic growth and the unemployment rate, and so he focused on quantifying this connection more precisely.

What is amazing is that 50 years later this pattern continues to hold true. It also shows up when we study other countries, and it appears when we look for it at the state level. The resiliency of this finding has earned it a name: Okun’s Law.

Okun joined the council as a member in 1964 and assumed the chairmanship in 1968. He then moved to the Brookings Institution, where he helped found the Brookings Papers on Economic Activity, one of most important forums for macroeconomic research in the United States. In the 1970s, Okun turned his attention to the connections between growth and income inequality and published his classic book “Equality and Efficiency: The Big Tradeoff” in 1975. He died of a heart attack on March 23, 1980, at age 51.

This is why the unemployment rate remains high both in the United States and Minnesota. And no one is currently predicting any improvement. Neither the Federal Reserve’s latest forecasts nor those used by Minnesota Management and Budget show growth reaching, let alone exceeding, 3 percent in the next two years.

Arthur Okun told us what to do. Let’s get to it.