The European Union’s efforts to save the euro dominated the news last week. By Friday, all the EU member countries, except for the United Kingdom, agreed to negotiate a new treaty that would set limits on member nations’ budget deficits and expand the existing bailout fund for countries such as Greece and Ireland.

Why did the Europeans expend so much effort to save a currency that has only been around for about a decade? Answering this question involves some economic history, and a realization that the euro is as much a political and historical statement as it is a currency.

1870 to 1913: Industrialization and rise of Germany
Industrialization spread from Great Britain to the European continent and North America from the 1840s through the 1860s. By 1870, the United States, Britain, France and Germany were the largest economies in the world (as measured by real GDP). 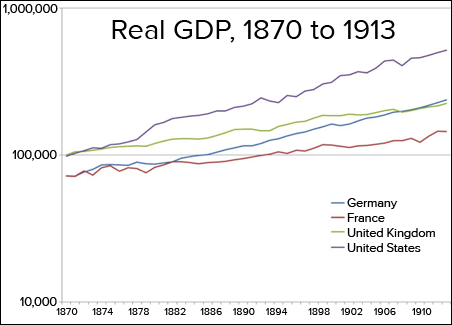 Source: Angus Maddison, “The World Economy: Historical Statistics”
The graph above uses a logarithmic scale. This means that the steepness of each curve tells us the growth rate of each country; a steeper line means that country is growing faster.

The United States moved to the head of the pack after 1870 and has maintained its lead ever since. As shown in the graph above, the German growth rate, which had been same as Britain’s, accelerated in the 1880s so that by 1913 Germany became biggest economy in Europe.

The late 19th century also witnessed the greatest movements of goods and people that had ever taken place in human history. In fact, relative to production and population, these flows were far greater than what we observe today. To top it off, Germany’s biggest trading partner was Britain, and vice versa.

Yet, this system crashed and burned in the inferno of World War I. The international trading system was shattered. The German economy, which had been at the heart of continental Europe’s industrial system, was in ruins.

1919 to 1945: The Humpty Dumpty period
“All the king’s horses and all the king’s men couldn’t put Humpty together again.” The industrialized countries of Europe and the United States tried to put the pre-war system back together, but there were two insurmountable problems.

First, France and Britain were determined to restrain the growth of German economic power, which threatened to overtake them again, and to punish Germany by extracting large war reparations. Yet most of the European economies, especially France, had relied on trade with Germany as an engine of growth. Since the engine was set to idle (at best), the rest of the European economy sputtered as well.

Second, the conventional wisdom was that before World War I, economies prospered and trade exploded because of the spread of the gold standard. Most policymakers thought that putting that system back together would go a long way toward repairing the damage of the war.

These were fatal mistakes. In particular, it’s now clear that the gold standard operated as well as it did because of the relative stability of the international economy from 1870 to 1914, not the other way around. By forcing themselves back into these “golden fetters” — to borrow a phrase coined by John Maynard Keynes — the industrialized economies made it impossible to deal with a serious recession when it came in 1929.

The policies of the gold standard required economies to do exactly the opposite of what we would today prescribe for an economy in recession. Today, we would recommend monetary expansion via lowered interest rates. Then, the monetary authorities — especially the Bank of England and the Federal Reserve Board — raised interest rates in order to protect their exchange rates. This drove economies down even further, from recession into depression and ultimately into another world war.

However, no one at Bretton Woods foresaw the most important dynamic that would affect the international economy: the Cold War.

The Bretton Woods architects assumed that countries would specialize according to their comparative advantages, just as predicted by economic theory. Thus, countries would decide with whom to trade and what to trade on the basis of the question: “What can another country do for me economically?”

The Cold War moved this question to second place and put another question first: “Whose side are you on?” If the answer was “the West” you were invited to join in the Bretton Woods system. If it was “the East” you were barred from participation. If your answer was “why do I have to choose?” you became part of the new Third World and you had to negotiate an international economy that was sometimes favorable and sometimes hostile to your interests.

This created a peculiar international economy that the Bretton Woods institutions were not designed to handle. Countries such as West Germany and Japan were built up as economic powers in order to protect the West from communism.

Germany: A European dilemma
So the Cold War presented a dilemma. Fighting the Cold War required a strong West German economy. But how could West Germany’s economy be unleashed without making them the dominant power in Europe? France was especially keen on avoiding a re-run of the 1920s and 1930s.

The solution evolved gradually from the late 1940s through the early 1990s.

The United States took the first step through the Marshall Plan. The Americans decided that rather than work with each country individually, Europeans would have to cooperate as a group and create continent-wide proposals for how the aid was to be used. (The British did not like this, but given their need for aid they were in no position to oppose the Americans.) In 1948, western European governments set up an institution called the Organization for European Economic Cooperation to coordinate economic plans across national lines and work together in allocating Marshall Plan funds.

The French and Germans made the next move by creating (along with Belgium, Luxemburg and the Netherlands) the European Coal and Steel Community in order to harmonize these industries across national lines. This led directly, in 1957, to the creation of the European Economic Community (EEC), in which tariffs on almost all goods and services were eliminated among the six states. The EEC continued to expand over the years with Britain, Denmark and Ireland joining in 1973, Greece in 1981, and Spain and Portugal in 1986.

Then came the fall of the Berlin Wall and the unification of Germany, and with it the reappearance of the German dilemma. With the end of the Cold War, how could France and other countries prevent Germany from resuming its place as the dominant power in Europe?

The answer came in two parts. First, the EEC, now renamed the European Union (EU), decided that they would continue to add new members and expand the free-trade zone so that it stretched across the entire continent. This would integrate Germany’s economy with all of its neighbors (both east and west) and link its economic fortunes with theirs.

Second, the EU’s leaders hit upon a clever way to take advantage of Germany’s strong currency, the Deutsche Mark (DM). Starting in the 1960s, the DM took its place as an international reserve currency, and one possibility arising from German unification was that other countries might simply adopt the DM as their own. (This was not a far-fetched idea, as a number of countries have eliminated their own currencies and adopted the dollar.)

Instead, the EU countries negotiated the Maastricht Treaty, under whose terms economies would first fix their exchange rates relative to Germany’s, and then later the individual currencies would be removed in favor of a common currency for everyone. This is exactly what was done between 1991 and 2001 as the DM, French Franc, Spanish Peseta, Greek Drachma and other currencies disappeared and Germany, France, Spain and Greece (along other countries) adopted the euro.

So the euro is the product of a long political struggle to tie Germany securely to the rest of Europe. Allowing the euro to collapse would be equivalent to giving up on a 60-year effort at European integration. Only Britain was willing to put this at risk, and they found themselves alone when the other 26 EU countries agreed to negotiate a new treaty.

Impact on Minnesota?
Why should Americans in general and Minnesotans in particular care about all this? The short answer is that our economy is tied to Europe’s through trade and finance. Any disruptions caused by a breakup of the euro will certainly affect our economy. The long answer will have to wait until next week’s post.

Understanding the euro — and the German dilemma