But consider this: On Nov. 17, the Minnesota Department of Employment and Economic Development announced that Minnesota’s unemployment rate fell from 6.9 percent in September to 6.4 percent in October while employment decreased by 6,100 jobs.

Doesn’t falling unemployment meaning rising employment? Not necessarily. To be a critical user of economic data, it pays to spend some time getting acquainted with the concepts behind the headlines.

The two surveys generally tell us similar stories about the state of the labor market, as they did in last Friday’s national report. Sometimes, however, they give mixed signals, as happened for Minnesota in October. At least two possibilities are at work.

First, the household survey measures employment as the number of people who reported working for pay; it doesn’t differentiate between self-employed and payroll employees. Thus, for example, self-employment could be rising while payroll employment is falling or vice versa.

Second, the establishment survey is slow to catch new businesses. That is, there might be many new companies being created that employ workers, but the sample of firms in the survey isn’t capturing this. The BLS tries to fix this by regularly replacing firms in the sample but there is probably some slippage.

The place to start is the pool of potential workers. In the United States, this is defined as anyone 16 years old and up who is not in an institution such as a nursing home, in prison or on active duty in the armed forces. Economists never come up with cool names for things, so we call this the civilian, non-institutionalized, working-age population. I’ll just call it the working-age population.

The labor force is then divided into the employed (i.e. those who work for pay) and the unemployed. According to the household survey, individuals are unemployed “if they do not have a job, have actively looked for work in the prior 4 weeks, and are currently available for work.”

Whew. Now, we can actually calculate the unemployment rate. Divide the unemployed by the labor force and voilà, you’ve got it.

The Bureau of Labor Statistics is well aware of this difficulty and therefore constructs an alternative measure of unemployment that includes discouraged workers; it’s called U-6.  (There’s that naming problem again…)  For example, the U-6 unemployment rate was 15.6 percent in November as opposed to the standard rate of 8.6 percent. This is a difference worth noting, as it involves almost 11 million people who are not counted in the standard rate but show up in U-6.

My labor market dashboard
Rather than focusing only on the unemployment rate or on payroll employment, I monitor four labor market indicators every month:

I do this for both the national numbers and the state-level data. Here’s my national dashboard for the period since the recession began: 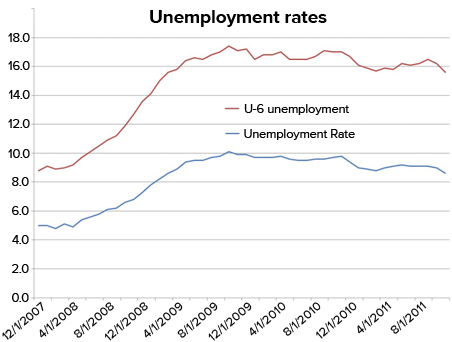 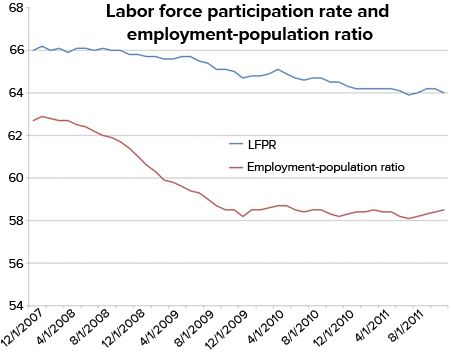 All of the data to make your own dashboard are available at the Bureau of Labor Statistics website. If you don’t like drawing your own graphs, you can go to the St. Louis Federal Reserve’s FRED database  and it will draw the graphs for you.

The advantage of using all of these indicators is that I have a more nuanced view of the labor market. In particular, it keeps me from focusing on the ups and downs of the unemployment rate and forces me to see that not only is this a severe slump in the labor market but one that has shown no improvement since the summer of 2009.

So, next time you read about the unemployment rate and the employment numbers, dig a little deeper ask yourself, what do you see in the data.