Why should Americans in general and Minnesotans in particular care about euro and the European Union’s travails in saving it?

Last week I told the story of how the euro is part of a 70-year effort to tie Germany to the rest of Europe. Today, let’s think about why Minnesotans should pay attention to what happens across the Atlantic.

Minnesota‘s trade balance
Minnesotans are entwined in an intricate web of trade with the rest of the world. Minnesota companies exported about $19 billion worth of goods and commodities in 2010, about 1.5 percent of total U.S. exports. Twenty percent of Minnesota’s exports went to Europe, with about 80 percent of these going to countries that use the euro. At the same time, $26 billion of imports flowed into Minnesota, with 9 percent of the total arriving from Europe.

(Throughout this piece, I used data from the U.S. Census Bureau. These data include all exports and imports, not just manufactured goods. The Minnesota Trade Office provides detailed quarterly reports on Minnesota’s manufacturing exports.)

European growth, Minnesota‘s exports
The German government has convinced its EU siblings that the road to saving the euro runs through austerity — increased taxes and reduced government spending. This may save the euro, but it will definitely slow down European growth for the foreseeable future. In particular, tax hikes will lead to decreased disposable income for European households, putting a damper on their consumption spending, and decreased government spending will put people out of work both directly (through government layoffs) and indirectly (via decreased government purchases of privately-produced goods.)

Who cares? We should, because part of the decreased spending on the parts of households and government will come at the expense of Minnesota-produced products. Further, the falls in consumption spending and government spending will weaken overall demand, causing businesses to cut back on their spending as well, and leading to fewer purchases of Minnesota goods by European companies.

Taken all together, slower European growth means slower Minnesota export growth. This is bad news for Minnesota companies that rely on European markets.

However, to do this takes money, money paid to finance professionals rather than, for example, research scientists. So the need to manage exchange rate risk might affect a company’s ability to innovate. And this is only for the case of increased fluctuations of the euro against the dollar. Imagine what would happen if countries started to leave the euro. Minnesota companies would have to start hedging against movements in more currencies, and would need to devote even more of their resources to financial transactions instead of R&D or marketing.

Longer-term concerns
Over long stretches of time changes in the exchange rate definitely affect trade flows by making Minnesota goods cheaper (if the dollar falls in value) or more expensive (if the dollar rises in value). Minnesota benefited from this factor between 2002 to 2008 as the value of the dollar declined against the euro, as shown in the chart below. 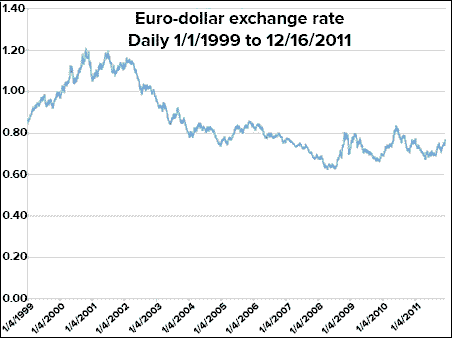 Minnesota-made goods became relatively cheaper and exports rose. However, since 2008 the dollar and the euro have fluctuated around 0.77 euros per dollar, and Minnesota’s exporters lost the advantage of a falling exchange rate.

Thus, another reason why Minnesotans should care about the euro is that long-term weakness in Europe may strengthen the dollar relative to the euro. This will make American-made goods more expensive, regardless of our efforts to increase productivity and maintain our competitive edge.

Where do we go from here?
Slower growth in Europe will definitely make it more difficult to export Minnesota’s goods to Europe.  Short-term uncertainty about exchange rates will force companies to devote more money to financial market activities and less to direct manufacturing processes. Long-run strengthening of the dollar will make our goods more expensive even if we continue to innovate and improve our products. These three headwinds blowing in the faces of Minnesota’s exporters are reason enough to pay attention to what happens across the pond.

Why Minnesotans should care about the euro