I attended the American Economic Association meetings in Chicago this past weekend. On my way home, a fellow Amtrak passenger asked if we came up with a way to fix the economy. I had to tell her that we had not, but hundreds of economists presented and discussed academic papers, many of which dealt with our economic woes.

The more I thought about our conversation, the more I wondered: What are The Meetings (as economists call them) all about? I eventually realized that, no matter how you look at it, The Meetings are a trade show: a trade show for publishers, job candidates, and most of all, for the profession itself. We weren’t there to solve the world’s problems, we were there to sell.

The textbook trade
If you want to see what’s up in academic publishing generally and economics textbooks in particular, this is the place to be. Dozens of publishers, software firms, think tanks and government agencies from around the world set up booths to show off their wares. Tables groan with new books, computer monitors project the latest and greatest statistical packages and databases, sales reps show professors why their book (and its computer supplements) is better than a competitor’s text. 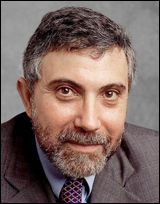 They even get celebrity economists to draw visitors. Look, there’s Paul Krugman at the Worth Publishing booth. Steve Levitt of “Freakonomics” is there too introducing his new book (written with former Obama economic adviser Austen Goolsbee). Joseph Stiglitz (former Clinton economic adviser) is over at the W.W. Norton display, and a sign says that Greg Mankiw (former Bush economic adviser) will be at the Cengage booth tomorrow. Hey, they have wine over at that table; there’s cheesecake at that one; come one, come all!

None of this is cheap, and is a small part of why college textbooks are expensive. There is a trade show like this one at every large professional meeting and the publishers have to build these costs into the prices of their books. It’s not a lot, but it does add up.

The Job Market
Ever wonder how an economist gets a job? Here is how it works: hundreds of colleges, universities, research institutes, investment banks and other employers meet thousands of graduate students and recent PhDs at The Meetings for The Job Market.

The Job Market consists of face-to-face, 30- to 60-minute interviews between job candidates and potential employers. The candidates talk about their research, why it’s interesting and important, and how they’ll be a good or even great teacher. The employers listen, describe their schools and companies and tell the candidates how great it will be to work for them. Candidates will sometimes have 12 to 15 interviews in the course of four days, while employers might do as few as six or as many as 25 interviews in day.

Most schools and companies conduct their interviews in a large ballroom filled with tables. This year there were 139 tables in two ballrooms at the Palmer House; the institutions ranged from the College of Saint Benedict | Saint John’s University and the University of Minnesota, Morris, to such banks such as J.P. Morgan Chase. The employers came from dozens of countries, including the United States, Canada, China, Kuwait, Mexico, Pakistan, South Korea, and Turkey.

Usually, employers and candidates schedule meetings in advance. However, you will also see forlorn candidates walking among the tables with their resumes, asking if an employer might have a few minutes to talk to them about a position, hoping that they will get lucky and snag a chance to show why they would be a great fit for your position. I look at their faces and see the exhaustion, watch them slump into chairs at the edge of the ballroom, and hope that things work out for them. These job candidates are selling themselves as much as the publishers but are making a whole lot less money.

Oh, and research presentations, too
You might have noticed that I haven’t said anything yet about the hundreds of academic papers presented during the meetings. (You can see the entire agenda here and download copies of the papers here.) This was the original reason why these kinds of meetings were held, so that scholars could meet and discuss their work.

It is still an important component, but is becoming less so as the web and other forms of electronic communication spread throughout academia and business. Yes, I could attend a session in Chicago with four papers on innovation policy. But I can just as easily download the papers in St. Cloud, read them in Collegeville, and discuss them with others via research blogs.

So attending bread-and-butter research presentations is declining. Instead, all-star panels and offbeat topics are starting to proliferate. See Paul Krugman debate tax policy with Greg Mankiw! Listen to Barry Eichengreen and others dissect the euro crisis! Come to the music session (classical, jazz and rock played by groups of economists) or the humor session (hear Paul Krugman discuss his paper on intergalactic trade)! This is the kind of stuff you can’t do on the internet, and even if you could it’s more fun to attend in person.

Selling, selling, selling
Is this what’s it’s come to? Do we have to sell the profession on itself? I got the feeling that presenting and talking about good research and better ways of teaching are taking a back seat to selling. Selling the latest software or textbook; selling an employer on your abilities as an economist; selling economists on how cool economists can be (be like Paul Krugman!).

Maybe I’m just cranky and tired after a long weekend of interviews. But I’ve been going to The Meetings most years since 1989 and something felt different this time, something that told me that the work itself and the problems that we need to deal with in the real world were floating away. In their place, money, celebrity and a desperate search for employment on the part of new PhDs was taking their place. I hope I’m wrong.