A capital gains tax is paid on the increase in the value of an asset that you sell after holding it for at least one year. For example, suppose that you buy a share of stock for $100 in December of 2010 and you sell it for $105 in January, 2012.  You have a capital gain of $5 on the sale.

A capital gain is just like an increase in labor income because it allows a household to increase its consumption. Continuing the example, you can go out and spend that $5 capital gain and still have $100 you had a year ago. (Note that to keep things simple I’m ignoring inflation. We could add it in but it would just muck up the example without adding any insight.)

And, just like your labor income, there is something else you could do with that capital gain: you could forgo buying anything and save it. When households do this the pool of resources for capital investment deepens and helps increase our productive capacity.

A quick history of capital-gains taxes
So, if capital gains allow people to either spend more or save more, just like any other kind of income, why are these types of income taxed at disparate rates, as shown in the graph below. 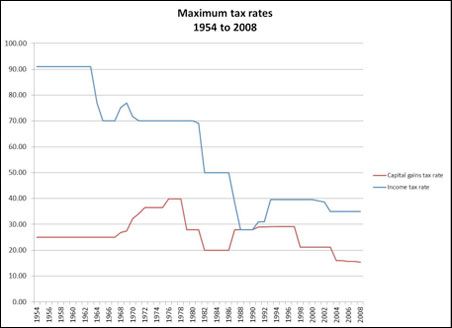 For instance, the top income tax rate in the 1950s was 90 percent while the capital gains rate was 25 percent. Why the difference?

Economists, however, argued against this idea throughout this period. Evidence mounted that high marginal tax rates on labor income affected saving (and hours worked as well), and that saving rates were roughly the same regardless of family income sources. So economists called for eliminating the distinction between ordinary-income tax rates and capital-gains tax rates.

The 1986 tax reforms, enacted under President Ronald Reagan, embodied this idea. The graph illustrates this in 1986, when the income tax rate and the capital-gains tax rate are equal. The reform not only eliminated the labor income-capital gains distinction, it eliminated loopholes and many deductions, reduced the number of tax brackets, and lowered rates across the board.

Why do we care?
The economic case for lower capital-gains taxes is that they foster increased saving and faster economic growth. Unfortunately, neither of these theories is borne out by the data.

First, household saving fell from 1981 to 2009, despite changes in capital gains tax rates: 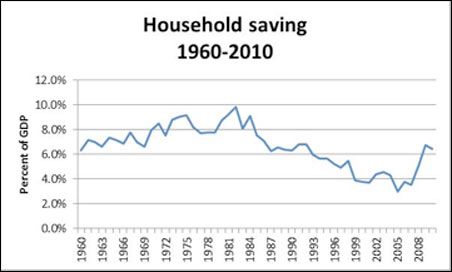 For instance, the decreases in capital gains rates in 1998 and 2003 don’t register as increases in household saving.

Second, the economy did not grow faster after reductions in capital gains taxes. The chart below shows the average annual growth rate of real GDP since 1954: 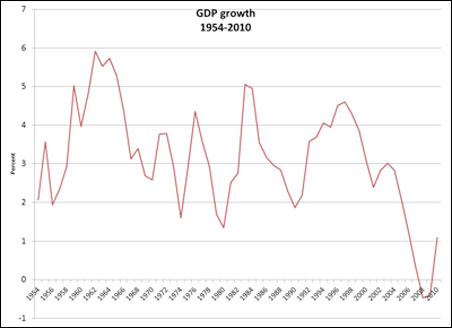 Consider the period from 1998 to the present. Capital gains taxes fell in both 1998 and 2003, yet the GDP growth rate fell steadily over this same period.

This surprised many policymakers, who thought that capital accumulation was the critical ingredient in economic growth.  It did not surprise most economists, however, who have known since the 1950s that capital formation is second to what we call total factor productivity (TFP).  TFP is the ability to improve our use of existing resources, and this is typically twice as important to economic growth than is increasing the capital stock.

Think about raising the rate
So, where does this leave us? First, it tells us that reducing capital gains tax rates to promote saving and growth doesn’t work. Eliminating the distinction between capital income and wage income is not going to bring the economy to a screeching halt.

Second, it provides another way to think promoting economic growth. We know that increases in human capital formation, through improved health and education, are an important part of total factor productivity growth. We could tax capital gains at the same rates as wages, and then use the additional revenue to fund investments in pre-K education or health promotion. Or, if we are really concerned about deficits and debt, we could use the proceeds to deal with those problems.

Mitt Romney and others have benefited greatly by paying a lower rate on their capital income than others do on their labor income. Rectifying this difference should be part of comprehensive tax reform.

The myth behind lowering capital-gains taxes