How is Minnesota doing compared to other states? Are we falling behind? Staying ahead? People ask these questions whenever I give a public talk. Those questions lie behind much of the policy discussion going on in St. Paul about the governor’s job plan, right-to-work laws and tax policy.

Over the next few weeks, I’ll take you on a guided tour of some data that sheds light on how well Minnesota is doing relative to other states and what these data imply about public policy. This week, I’ll focus on one measure: per capita personal income. The take away: As Garrison Keillor says, we’re above average, but it hasn’t always been that way.

Minnesota in the long run
Per capita personal income equals the total amount of income earned by residents of a state divided by that state’s population. (The complete definition is available here. In 2010, per capita income in Minnesota reached $42,847, while the national average hovered at $39,945 in 2010.

Per capita income is not in and of itself a measure of well-being. However, when adjusted properly for changes in prices, per capita income does tend to be positively associated with many things people value, including a high material standard of living, better health and life expectancies, and better education. These are the data I use in the figures below. 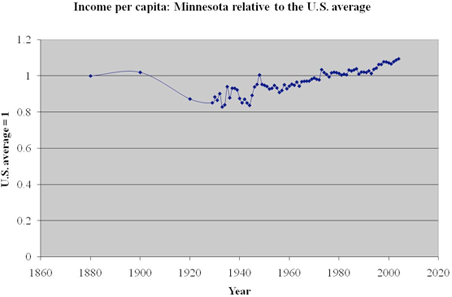 Terry Fitzgerald, an economist at the Federal Reserve Bank of Minneapolis, first presented the data for 1929 onward in a 2003 article which tells an important story: Starting at 85 percent of the national average, Minnesota reached parity in the 1960s and has been above average since the 1970s.

How did Minnesota become above average? We’ll explore this question over the coming weeks, but here’s the short version: High rates of labor force participation (especially by women), investments in human capital (such as education and health care), and investments in physical capital (both by private funders and public agencies) contributed to Minnesota’s strong economic performance.

Minnesota and its neighbors
We often hear of how Minnesota must compete with its neighbors for businesses and jobs. We ultimately care about these things because they help determine our citizens’ standard of living. So, how does Minnesota stack up against our neighbors, namely Wisconsin, Iowa, South Dakota and North Dakota?

Let’s start by smoothing the data so that we can see the long-run trend. (For those who are interested: I applied a Hodrick-Prescott filter just as Fitzgerald did in his work.) Here is what we get for Minnesota: 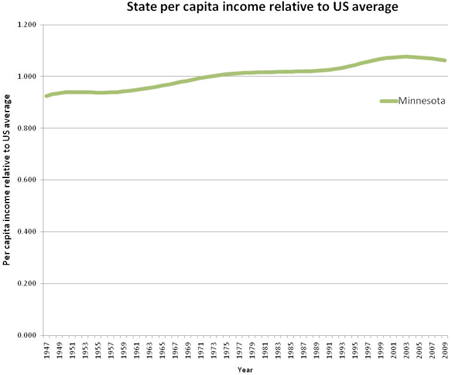 Now, let’s compare this with Wisconsin over the same period: 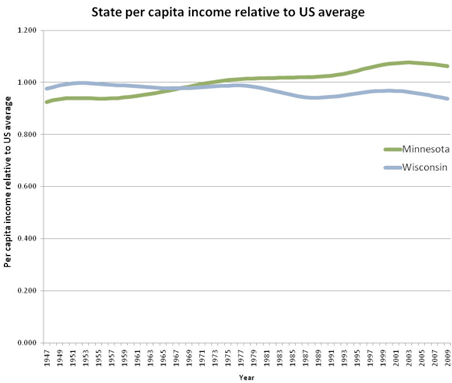 Minnesota’s per capita income exceeded Wisconsin’s starting in the 1960s. Not only that, but Wisconsin fell relative to the national average at the same time as Minnesota rose. Comparing Minnesota and Iowa tells a similar story: 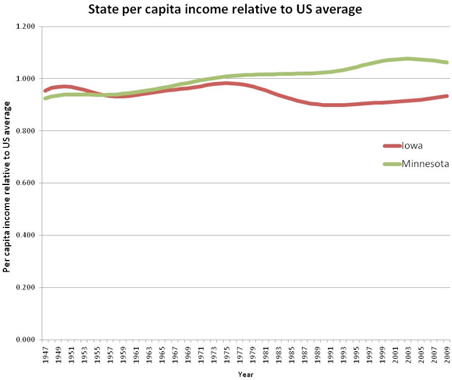 Average income in Minnesota exceeded Iowa’s in the early 1960s and never looked back.

How about the Dakotas? We hear quite often how well they are doing, so let’s take a look. Here is South Dakota versus Minnesota: 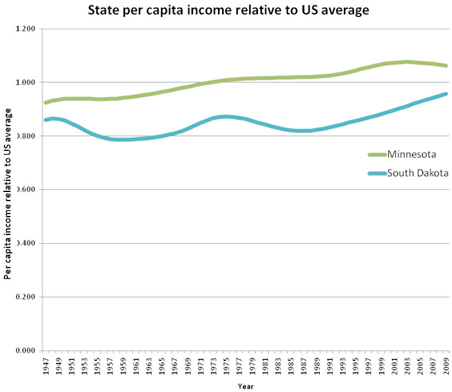 South Dakota certainly grew steadily over the past 25 years, but its average income still hasn’t reached the national average. Further, the high points in the late 1940s, the mid-1970s and the late 2000s all correspond to periods of high prices for agricultural commodities, pointing to a potential weakness in South Dakota’s economy.

The situation is even starker when we compare Minnesota and North Dakota: 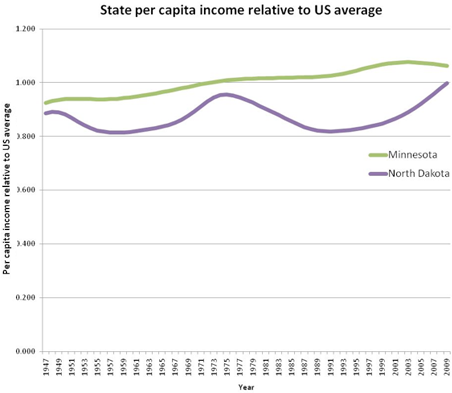 North Dakota exhibits the same patterns as South Dakota; they are exaggerated by the importance of oil and gas extraction in North Dakota and thus make their economy even more subject to booms and busts.

What about some other states?

Two states to which Minnesota is often compared are Indiana and Texas. Indiana, for example, recently passed a right-to-work law and this will no doubt be cited in our Legislature’s debates on this issue. Texas is known as a low-tax, small government state that its governor, Rick Perry, cited as an example that the rest of the nation could follow.

Here is Minnesota versus Indiana: 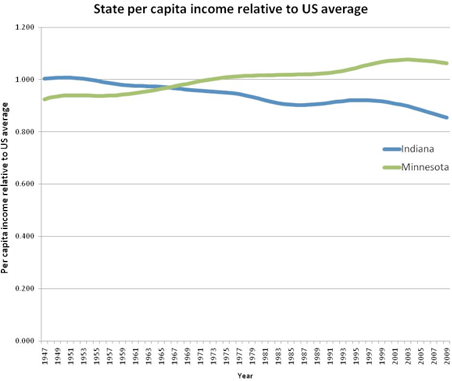 Indiana went in exactly the opposite direction of Minnesota since World War II, with per capita income about 85 percent of the national average.

How about Texas versus Minnesota? 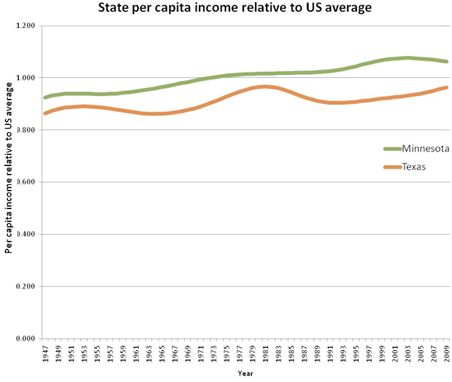 The Lone Star State shows a pattern similar to the Dakotas, with booms and busts in oil and farm prices driving per capita incomes. And, despite low taxes and little regulation, Texas still hasn’t reached the national average in per capita income.

Implications for policy
These data are only the first pieces of a larger puzzle we must assemble in order to think about economic policy in Minnesota. However, they paint a very clear picture. First, Minnesota did well since World War II both in absolute terms and relative to our neighbors. Second, Minnesota performed better than states such as Indiana and Texas that are held up as examples of low taxes and minimal government.

Obviously, the past doesn’t predict the future. It could be that the factors that made Minnesota above average no longer apply in the early 21st century. But before we enact radical reforms to improve our competitiveness, let’s spend some time ensuring that we have the record straight. We’ll keep assembling that record in the coming weeks.

Minnesota’s per capita personal income compared to its neighbors