Last Friday, the Bureau of Labor Statistics (BLS) reported that Consumer Price Index (CPI) rose by 0.4 percent in February and was 2.9 percent higher in 2012 than it had been in 2011.  In plain English, this means that inflation is quite low.

You might respond: “OK, but what about gas prices? They’ve gone up 20 percent since November! Isn’t that inflation?”

My short answer is no. A rise in gasoline prices is not a measure of inflation, and it’s worth taking some time to understand why.

The average price per gallon of gasoline rose from about $3.27 in November to $3.58 in February, an increase of roughly 10 percent. Is this a big increase or a small one? Is $3.58 a high price?

Prices such as $3.58 per gallon of gasoline, or $1.50 for a loaf of bread, don’t give us enough information to answer these questions. We need benchmarks against which we can compare the price of gasoline relative to a loaf of bread and the other things we buy, both today and over time.

Economists use price indices as our benchmarks. A price index measures the overall level of prices at a particular point in time. For instance, the Consumer Price Index (CPI) measures the general level of prices for goods and services that a typical household purchases each month. (A nice summary of the details is here.) 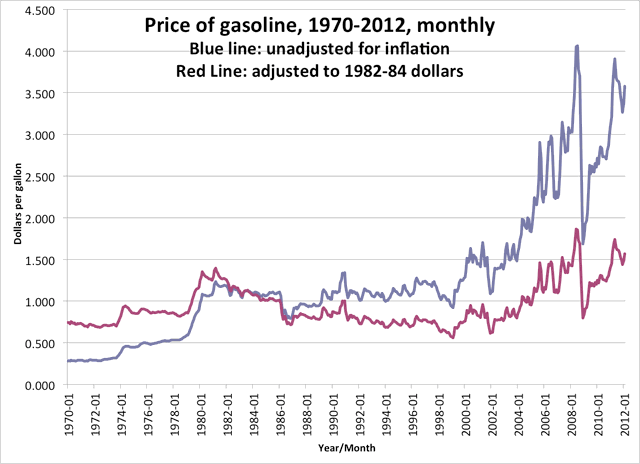 (By the way: you can do calculations like this quite easily using calculators that are available on the web. Two of my favorites are MeasuringWorth.com and the Minneapolis Federal Reserve calculator. Did you know, for example, that a first-class train ticket from Washington, DC, to New York was $13.36 in 1956, which translates into $114.19 today? A business class seat on Amtrak is about $120 today. Not bad!)

Inflation and the inflation rate

I haven’t yet defined the word “inflation.” Now we’re ready: inflation is a rise in the general level of prices as measured by a price index like the CPI. Inflation is not a rise in the price of a particular good or service, such as gasoline. An increase in real gas prices, like that shown in the graph above, is called an increase in the relative price of gas. And the rise in the nominal price of gasoline (i.e., the blue line in the graph above) is meaningless since it doesn’t compare gas prices to any standard such as a price index or the price of another good.

The inflation rate measures the speed at which prices are rising and is calculated as the percentage change in the CPI. So when the BLS announced that the CPI was 2.9 percent higher in February 2012 than in February 2011, this meant that over the course of that year the general level of prices rose at rate of about 3 percent per year. 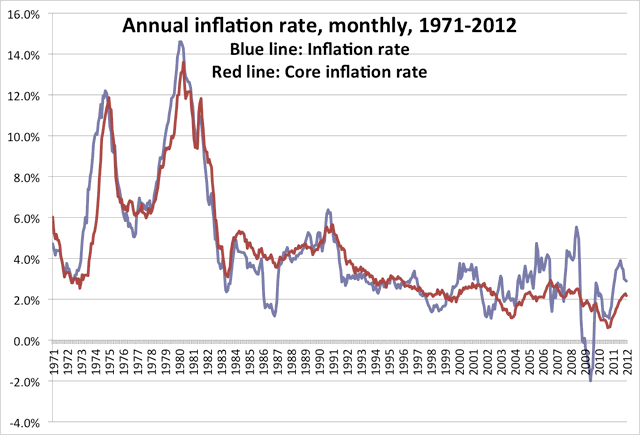 Notice that this inflation rate is pretty volatile — see, for instance, the jagged line in 2009. To deal with this problem, economists use another measure called the core inflation rate. Core inflation is the rate of increase of all prices except energy and food, the two items most frequently responsible for short-run fluctuations in the inflation rate. Because core inflation excludes the sources of the most volatile price changes, it is considered to be a useful short-term measure of the underlying inflation trend.

Should we be worried? 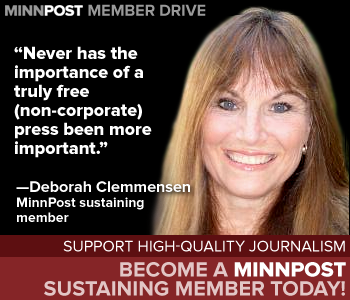 The inflation rate today is quite low, and has averaged about 2 percent per year for the past 10 years. Gas prices have been rising faster than this, but when adjusted for inflation, they are at roughly the same level they were before the financial crisis of 2008. Increases in the prices of individual products, such as gasoline, tell us nothing about inflation because inflation is a rise in the general level of prices, not a jump in the price of one good.

What about the future?  Should we, to quote a recent column in the StarTribune, “Prepare for impact: Inflation’s tide will soon be rushing in”? No, I don’t see inflation exploding or even rising significantly in the near future. A combination of faulty theoretical reasoning and inappropriate historical analogies is leading many to make this claim. I’ll work through the details next week.