There’s been handwringing lately over what some see as the coming tide of inflation,  but I don’t see a tsunami on the horizon.

Why not? I believe that a combination of faulty reasoning and inappropriate historical analogies is leading many to mistakenly conclude that higher inflation is on the way.

OK, but what do economists mean when they say “money?” To an economist, money is any asset that can be used in making purchases. Historically, societies have used sheaves of wheat, bundles of tobacco, seashells and all kinds of physical objects as money. Over time, precious metals such as silver and gold came to be used both in day-to-day transactions and as an asset held in bank vaults. The latter is important because banks issued notes that could be redeemed in gold rather than giving out gold itself. The notes themselves then became the medium of exchange.

Today, we use fiat money, which is money not backed by gold, silver or any other asset. People hold fiat money not because they think the green pieces of paper in their wallet can be exchanged for gold but because they can exchange them for goods and services.

The Federal Reserve measures the amount of money in the economy in two ways. Economists usually focus on a measure called M2. (Economists rarely have cool names for anything; this one sounds like something in a James Bond film.) M2 is the sum of currency and coins, balances held in checking accounts and some additional assets that are usable in making payments but at greater cost or inconvenience than currency or checks. (The latter include short-term savings deposits and balances in money market mutual funds.)

Now, if we look at the growth rates of M2 since 2005 (or a similar picture for the other measure, M1) we’ll see this: 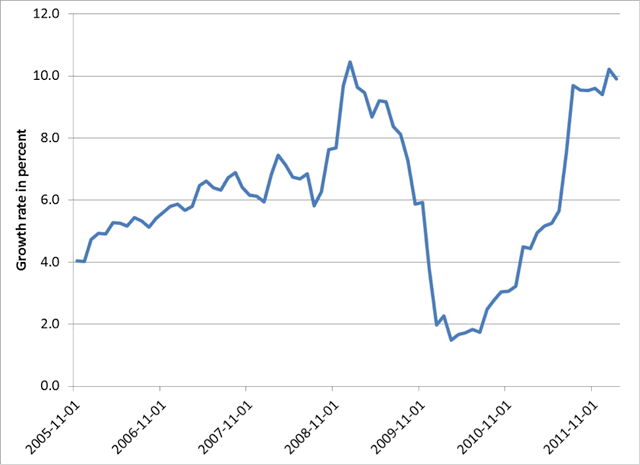 Here is where faulty theoretical reasoning enters the picture. Someone looks at the endpoint of the graph and sees that the money supply is 10 percent higher in February 2012 than it was in February 2011. That must mean we’re going to have high inflation, right?

No. Remember: Faster money growth leads to higher inflation, all else equal. But all else has not been equal over the past few years. Specifically, the proportional relationship between money growth and inflation changed during this recession because households and businesses want to hold more currency and bank deposits than they did four years ago. Thus a good portion of the money growth we’ve seen has simply gone into the electronic equivalent of bank vaults. The growing money supply isn’t being spent at the same rate as it was earlier and thus does not lead to higher inflation.

What about farther ahead in time? Won’t the money growth eventually cause higher inflation? Again, no, because the Federal Reserve is closely monitoring both inflation and the growth of money. The Fed will slow down money supply growth or even decrease the money supply if it sees that society is going back to its pre-2007 levels of money holdings.

(For those of you who like the details, here’s another way of putting the matter: The relationship between money growth and inflation is governed by a constant called the velocity of money. During the past four years the velocity of money declined sharply and thus a given increase in money growth leads to a smaller increase in inflation than it did in previous years. When the Fed observes velocity returning to its previous value, it will slow down money supply growth in line with the rise in velocity.)

Hyperinflations are episodes of extremely high inflation. The United States during the Revolutionary War, the Confederacy during the Civil War, Weimar Germany after World War I, Brazil in the 1980s, Russia in the 1990s and Zimbabwe in the 2000s all suffered bouts of inflation in the hundreds and thousands of percent per year.

It’s inevitable that whenever the money supply starts to grow rapidly someone will pull these examples off the shelf and say: “This is what’s going to happen in America! Repent of your wicked monetary ways!”

Economists know that rapid money growth causes inflation. Milton Friedman put it best when he wrote: “Inflation is always and everywhere a monetary phenomenon.” Unfortunately, this quotation is often misunderstood and misapplied to economic events and used to make false analogies between, for example, Weimar Germany in the 1920s and the United States today.

Thomas J. Sargent , who won a Nobel Prize last fall, made this point thirty years ago in a famous paper, “The Ends of Four Big Inflations.” He examined hyperinflations in Austria, Hungary, Poland and Germany after World War I and pointed out that indeed these episodes were caused by high rates of money growth.

But Sargent went a step further and asked an important question: Why were governments allowing the money supply to grow rapidly? He then demonstrated that in all these cases governments printed money to finance government expenditures. They were forced to do this because they could no longer collect enough taxes or issue sufficient quantities of interest-bearing bonds to cover their spending. The only thing left to do was to fire up the printing presses.

There are no signs that the United States money growth is driven today by federal government deficits. Tax collections remain healthy, financing over 90 percent of spending. High government bond prices both indicate that the federal government is having no trouble financing its deficits. And the government has not turned to the Federal Reserve to make up the difference between tax revenues and income from borrowing. Rather, the Fed acted independently to increase the money supply in response to a financial crisis in which households and businesses wanted to hold the safest of all assets: cash and bank deposits.

Theory and history: handle with care

Rapid inflation is not a looming threat. The money supply grew rapidly because households and businesses got a terrible jolt in 2007-2009 and now want to hold larger reserves of cash and bank deposits than they used to. This type of money supply growth does not lead to increased inflation today, and I am confident that it won’t do so in the near future.

Why we don’t need to worry about inflation