I bought my first stereo at Schaak Electronics. The record player didn’t have a needle. (For you young folks, a phonograph required a needle in order to play the record.) I bought one at Sound of Music, a store near Ridgedale located in an old construction trailer.

Schaak Electronics is long gone, but Sound of Music evolved into Best Buy. A recent article in Forbes  argued that Best Buy is following Schaak into the history books. Events last week seemed to echo this when Best Buy announced layoffs, store closings and other cost-cutting measures designed to reduce the company’s losses.

Best Buy’s travails are part of a much longer story: the evolution of mass retailing since the Civil War. It’s a tale of growth, evolution, rebirths and corporate deaths. Best Buy, Target, Zappos, and Amazon are part of our retail culture, but Schaak Electronics, Dayton’s, Kinney Shoes and Sears once filled these same places and now are gone.

The growth of mass retailing after the Civil War was made possible by a revolution in transportation and communication that was set in motion before 1860. The railroads provided, fast, all-weather transportation. The telegraph network (and later, telephones) delivered rapid communication across long distances 24 hours a day, seven days a week.

The two innovations worked together to create an integrated transportation and communication system. In particular, railroads used the telegraph to coordinate service across long distances. For instance, railroads could operate more trains on a single stretch of track with less danger of accidents and reduce the cost per ton-mile shipped. The railroad could then use the reduced costs to both charge their customers lower prices and boost their profits.(Alfred D. Chandler, Jr., provides the details of this revolution in his book “The Visible Hand: The Managerial Revolution in American Business.”)

Department stores came about in two ways. First, wholesalers such as Marshall Field grew large in the 1870s by taking advantage of the railroads and the telegraph to expand their territories and their lines of business. They then opened stores in large cities that sold goods directly to the public rather than to smaller retail stores. Second, dry goods stores located in big cities (for example, Macy’s) started purchasing goods directly from manufacturers. In both cases, the stores were organized according to departments, such as men’s clothing, women’s accessories and the like.

The dense populations of cities fueled department store growth. Retailers such as Dayton’s in Minneapolis and the Golden Rule in St. Paul stocked large amounts of goods and rapidly turned over their stock, knowing that they could order via telegraph more of what sold well and have it delivered via the railroads. Department stores could thus make money by reducing their profit margins and selling high volumes, a strategy that Target and Walmart later utilized intensively.

In 1872, Montgomery Ward applied these ideas to create the second type of mass retailer: the mail-order house. Customers in small towns and on farms could look through a catalog, choose what they wanted, and send their order to Ward’s central warehouse in Chicago either by mail or telegram. Ward’s filled their request, shipped the order by rail, and the customer could either pick up their goods at the nearest railway station or later have it delivered to them via parcel post. 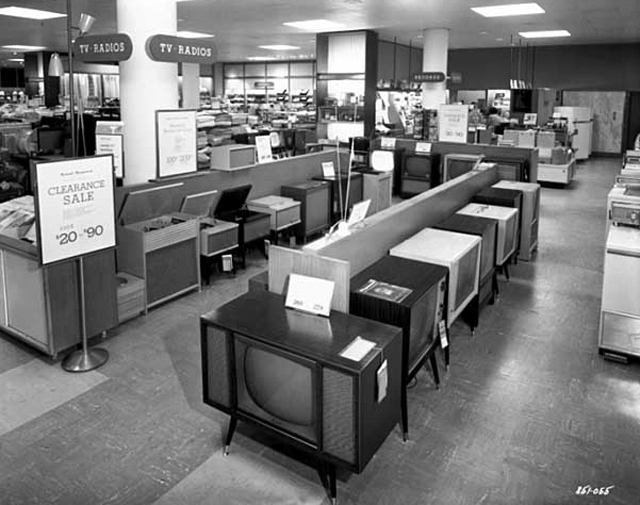 Sears, Roebuck, and Co. was the premier example of the mail-order house. It began in 1887 selling watches by mail, adding jewelry, silverware, sewing machines and bicycles over the next five years. By 1899 Sears had departments ranging from “dry goods, men’s clothing, men’s furnishings, cloaks, shoes, notions, jewelry, groceries, drugs, hardware, carriage hardware, stoves, furniture and baby carriages, sewing machines, bicycles, buggies, vehicles, saddlery, sporting goods (including guns), musical instruments, gramophones, optical goods, stereopticons, and books..” All of this was available to anyone with a Sears catalog. Sounds a lot like Amazon.com…

The third kind of mass retailer was the chain store. Chain stores filled two niches: First, they offered items like groceries and lower-priced merchandise that were not offered by either the department stores or the mail-order houses. Second, chain stores grew up in smaller cities and towns, places that were too small for department stores like Marshall Field but were big enough to support high-volume retailing.

Most Minnesota towns and cities had main streets lined with chain stores by the 1930s. Woolworth’s, Ben Franklin, Kinney Shoes and Rexall Drugs are among the names many of us remember from earlier times but which have disappeared.

In the 1920s and 1930s, the lines between department stores, mail-order houses and chain stores blurred. Sears opened their own chain stores while J.C. Penney started a chain store and added a catalog. Suburban growth fueled by the automobile pushed retailers of all stripes to build new stores and offer services tailored to this market.

By World War II, Sears was the dominant retailer in the world, with Ward’s and Penney’s competing fiercely. Regional department stores such as Macy’s, Marshall Field, Rich’s and Capwell’s dominated the major cities’ downtowns from New York to San Francisco, while chain stores filled in wide swaths of America’s small towns and rural areas.

Best Buy is facing the same question that mass retailers faced in the 1920s and 1930s: How do we evolve from our beginnings into something new that meets today’s needs and challenges?  Department stores, mail-order houses and chain stores converged on a new format in the 1950s: the shopping mall. I’ll examine those developments next week.

Best Buy’s travails part of the evolution of mass retailing