Like retailers of past, Best Buy will have to adapt to survive

Best Buy CEO Brian Dunn’s highly publicized departure this week has prompted a flood of speculation about the future of the company – and about the end of retailing as we know it.

Although Best Buy’s fall – reporting declines in same-store sales in six of the past seven quarters – may seem abrupt, even stunning, the company and other brick-and-mortar chains are facing the same question that mass retailers faced over the last 100 years: How do they evolve from their beginnings into something new that meets today’s needs and challenges?

To better understand those challenges, it’s helpful to examine the roots of mass retailing and how retailers have responded to changing markets in the past.

Mass retailing grew up between 1880 and 1920, as I described in last week’s column. Department stores, mail-order houses, and chain stores utilized the railroad and telegraph/telephone networks to create high-volume, low-margin businesses that sold everything from razor blades to furniture.

Then, automobile ownership and the development of trucking changed the retail environment in the 1920s.  Customers could drive themselves to stores instead of waiting for packages in the mail. Suppliers were no longer limited to railroad lines; they could now ship goods anywhere trucks travelled. The advantages of department stores in urban centers served by public transportation and mail-order houses that served rural areas eroded as chain stores took advantage of the new transportation realities.

Mail-order houses reacted first; they saw their business drop as customers drove themselves to chain stores.  So Sears, the largest mail-order house, moved rapidly to create chain stores of their own in fast-growing suburban areas and small towns. For instance, in 1928 Sears opened one of its largest stores at Chicago and Lake in Minneapolis (it’s now the site of the Midtown Global Market and the Midtown Exchange building). 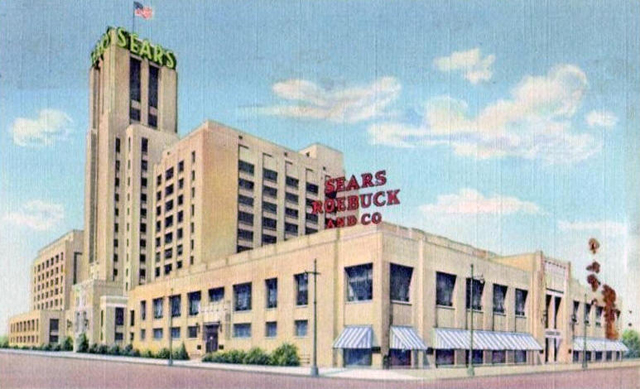 lakesnwoods.comIn 1928 Sears opened one of its largest stores at Chicago and Lake in Minneapolis.

Department stores also started branching out and creating small chains, but the growth of suburbs posed a problem for them (as well as for Sears and other chains): Where do we put our stores?  Cities had clearly defined downtowns and neighborhoods, but suburbs often lacked an obvious business center.

The solution was the shopping center. The first iterations were what we would call strip malls, that is, groups of stores each with its own entrance facing a central parking lot. Knollwood Plaza in St. Louis Park  is a good example of this early model: a Powers department store anchored one end of the project while chain stores filled the rest of the complex. 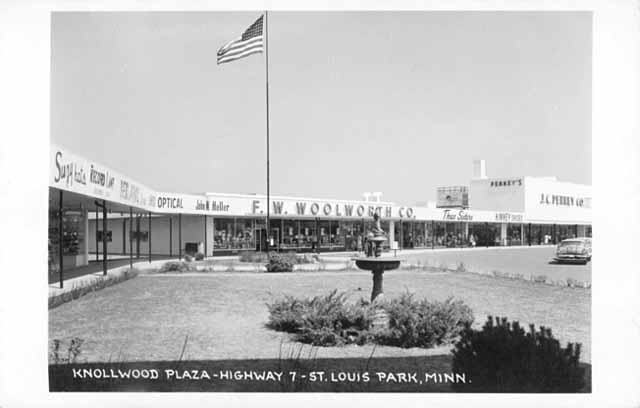 Courtesy of the Minnesota Historical SocietyKnollwood Plaza in St. Louis Park was one of the first strip malls.

Shopping centers were fine, but walking from the car to a store on a winter day and then going from store to store in the cold discouraged shoppers from lingering.  So, reported The New York Times on Oct. 9, 1956, “The first weather-conditioned shopping center opened in Edina, Minn.,” the previous day. This, of course, was Southdale Center, the next step in retail evolution. Store entrances faced an enclosed central courtyard instead of facing the parking lots. Shoppers could park their cars and then stroll in climate-controlled comfort from store to store. 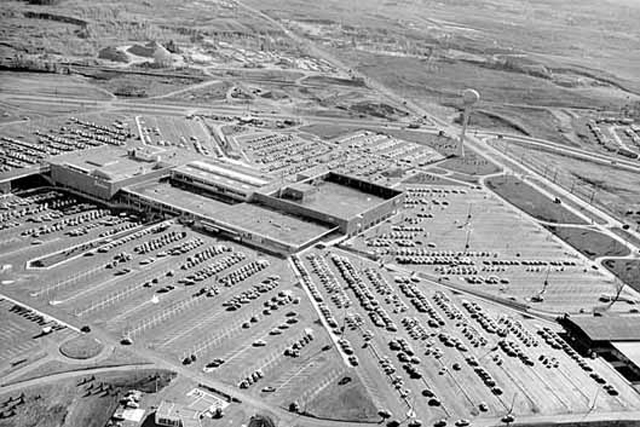 Courtesy of the Minnesota Historical SocietySouthdale Center, which opened in 1956, was the first indoor suburban shopping mall.

Others looked at the problem differently. S. S. Kresge Corporation operated a large chain similar to Woolworth’s. During the 1950s Kresge put stores in shopping centers, but then decided that a better way to go was to build stand-alone stores with acres of parking. Their first K-Mart opened in Garden City, Mich., in 1962, and by the early 1970s Kresge was opening 100 new stores a year.

Two competitors watched Kresge’s experiment with great interest. One was the owner of a Ben Franklin franchise in Arkansas, Sam Walton. Wal-Mart was in many ways a copy of the K-Mart concept, but with a significant difference: While K-Mart kept large stocks both on the sales floor and in backrooms, Walton opted to keep as little inventory as possible in the stores. Walton’s aim was to speed up the rate at which goods moved into and out of the stores, thus minimizing inventory costs.

The other observer was the Dayton Corporation, which developed Southdale and owned Dayton’s department stores. Dayton noted that both K-Mart and Wal-Mart concentrated on low-priced merchandise aimed at blue-collar urban and suburban families (K-Mart) or low-income rural and small-town customers (Wal-Mart). Why not create something that catered to middle-income suburban families? The result was Target.

From the 1970s through the 2000s the big boxes evolved further, and Best Buy was a prime example of this trend. Chains took the idea of large, free-standing stores with plenty of parking and then focused their merchandise on items such as electronics (Best Buy, Circuit City), housewares (Bed, Bath and Beyond, Linens and Things), home improvement (Home Depot, Menards) and eventually books (Barnes and Noble, Borders).

What’s next?  How will Best Buy and other brick-and-mortar chains evolve to meet the next set of challenges?

The test for department stores, mail-order houses and chain stores was suburbanization driven by the automobile. Some companies survived and thrived: Dayton Corporation eventually shed its department stores and embraced its new identity as Target Corporation. Others, such as Sears and S. S. Kresge, embraced the mall and the big box and did well for decades but now struggle to survive. Woolworth’s, Montgomery Ward, Ben Franklin and local chains such as Gamble’s didn’t even make it past the 1980s.

Online retailing is the new challenge to existing retailers. Will they evolve and grow like Dayton’s? Will they stumble and limp along like Sears and K-Mart? Or will they die like Woolworth’s?

The answer will come, I believe, by applying some basic economics. In particular, economic theory postulates that firms are collections of objects (labor, capital, natural resources) and ideas (recipes for managing these resources and producing goods and services). And, just as importantly, companies exist to make the best use of these objects and ideas regardless of what they produced in the past. Perhaps retailers, specifically, and businesses, more generally, should actually do this – at least the ones that want to survive.

However, by the 1960s grocery shoppers started to prefer lower prices to premiums such as stamps. Carlson could have tried to keep this business going, but he didn’t. He looked at his people, his capital and his company’s knowledge of retail and used those objects and ideas to move into hotels, restaurants and travel agencies. By the early 1980s, Gold Bond Stamps were gone, but Carlson Companies continued to grow and thrive as a hospitality firm.

Best Buy and other brick-and-mortar retailers must ask the same question. What do we do? If the answer is simply “sell stuff,” then they are dead. Internet retailers can do this far more cheaply and quickly. But if they look closely at the talents of their people and the capital they have available to them, and then answer a key question — “How can we best use these resources?” — they can grow into businesses we can’t even imagine today.

Like retailers of past, Best Buy will have to adapt to survive