It’s tax time again, and everyone is abuzz with stories of how difficult it was to prepare their taxes and how much money they are getting back from the government (or how much they owe). But let’s take a look at Minnesota’s tax system from an economist’s perspective because it will tell us who bears the burden of a tax.

Economists use tax incidence analysis to answer that question. In particular, the Minnesota Department of Revenue examines both “how the total state and local tax burden on Minnesota households varies by income range” as well as “how the burden of each component of the overall state and local tax system is distributed across Minnesota households.” (The reports are done every two years and are available here.)

On Tuesday, MinnPost’s Sharon Schmickle presented data from the 2011 tax incidence study. She wrote: “Pull together every state and local tax Minnesotans pay and you clearly can see that the households with the highest incomes pay the lowest effective tax rates.” That is, our state and local tax systems, when taken together, are regressive.

Minnesota is not unusual in this regard; only one state, according to the Department of Revenue, had a progressive state/local tax system and Minnesota was about average in terms of regressivity. Unfortunately, the regressivity of Minnesota’s state and local taxes increased between 1990 and today, with our system being roughly neutral (neither progressive nor regressive) in 1990 and becoming more regressive over time.

The tax incidence studies conducted over the past 20 years allow us to study how tax burdens changed over time.  The chart below shows the effective tax rate paid by each population decile from 1990 to 2008 along with an estimate for 2013. 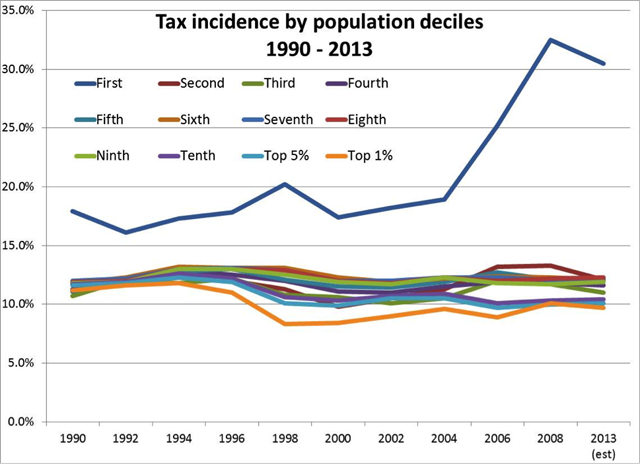 Second, the first decile pays the highest tax rate and the 10th decile pays the lowest rate, meaning that the system is regressive. However, as Schmickle wrote, “That stat is accurate as far as it goes, but analysts caution that it [the first decile] includes a lot of Minnesotans who draw from resources other than taxable income – for example, seniors who rely on savings supplemented by relatively small earned incomes.”

This is true, but it brings up a question for public policy: Do we want a system that has effectively doubled the tax rate on the lowest income households over the past 20 years? My answer is no.

The next chart on taxes goes to the other end of the spectrum and shows the evolution of tax incidence for the top decile along with the top 5 percent and top 1 percent of income earners. It’s almost the reverse of the previous chart. 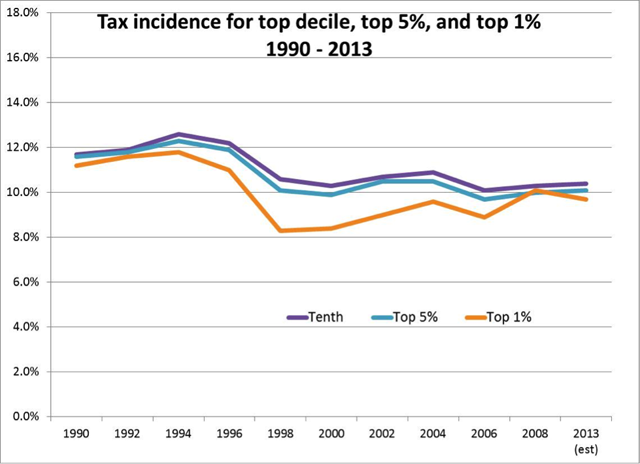 Source: Minnesota Tax Incidence Study 2011, Table 1–8Top effective tax rates were around 12 percent in the 1990s and are around 10 percent today. The rationale for this was, in part, that tax cuts for the top income earners would spur economic growth. Did this happen?  Nope. The chart below shows that income growth actually slowed in the 2000s relative to the U.S. average. 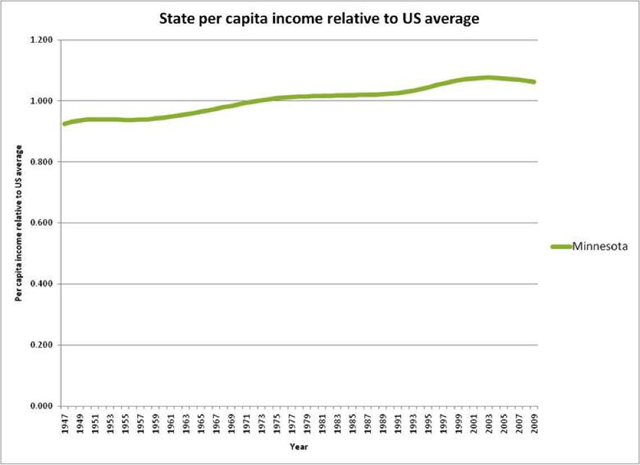 The final chart shows the middle of the income distribution, which consists of the fourth, fifth and sixth deciles, along with the top decile. Middle-income households saw their tax rates fall in the early 2000s, but then they rose over the course of the decade. The top tax rate dropped and did not rise. 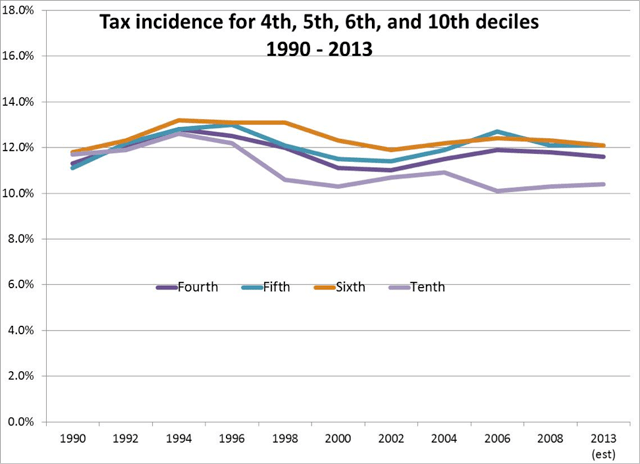 Source: Minnesota Tax Incidence Study 2011, Table 1–8Minnesotans deserve a better tax system than they have now. We can raise the same amount of revenue in a way that spreads the burden more equally across income groups and that makes the tax code simpler.

Susan Riley and I pointed out in an earlier column that we don’t need to do another study to show us what to do. Gov. Tim Pawlenty appointed a tax-reform commission and ignored its findings, but the Legislature and the governor could pick it up and use it as a roadmap for tax reform. The commission recommended, in particular, a broader sales tax (with a consequently lower rate), a simplified income tax system, and reform to both household and business property taxes.  The commission’s report is a starting point to achieve a better tax system for Minnesotans.

Who bears the biggest tax burden in Minnesota?