It’s college graduation season: “Pomp and Circumstance,” caps and gowns, commencement speeches and new careers. This also means there is much talk about the costs of college: debt burdens, lack of employment opportunities, college graduates moving home instead of getting their own places.

Economic analysis starts from the premise that people will take an action if the extra benefits exceed the extra costs. However, this analysis only works if all of the relevant costs and benefits are factored into the calculation. If the total additional benefits of an action are understated or the total additional costs are overstated, then fewer people will take that action.

Education is subject to this problem because some of the costs and benefits are borne and received by college students and some by society.

This is the central rationale for state and federal support for higher education, but increasing debt burdens indicate that we as a society have decided that most of the benefits flow to individuals. College graduates are earning higher salaries and experiencing less unemployment, so higher tuition paid for through more debt is simply the cost of these benefits, right?

No, not quite. Two social benefits deserve special attention.

First, human capital formation through education is an important source of long-run economic growth. As Lawrence Katz and Claudia Golden [PDF] put it, “Broad access to education was, by and large, a major factor in United States economic dominance in the 20th century and in the creation of a broad middle class.”  The benefits of faster economic growth benefited both those who went to college and society as a whole.

What have we seen over the past 20 years, as debt burdens rose and state support grew slowly?  Lower growth rates of personal income and a more widely skewed income distribution.  This is a clear social cost.

A second benefit is that our democratic system relies on an educated populace.  Our problems are increasingly complex and the information flows faced by the typical voter are growing rapidly.  Despite calls for simple solutions to today’s problems, the world requires more people to have the critical thinking skills that a college education provides.

Unfortunately, when I look at increasing debt burdens and rising tuition, I see a higher education finance system built on the premise that social benefits are shrinking relative to higher incomes and lower unemployment rates for college graduates.

I think this is wrong, and that the social benefits of higher education are only going to rise in the coming years.

Here’s a brief look at what’s viewed as the clearest benefit of a college degree: higher earnings.

Earnings are directly proportional to educational attainment, as shown by the chart below. 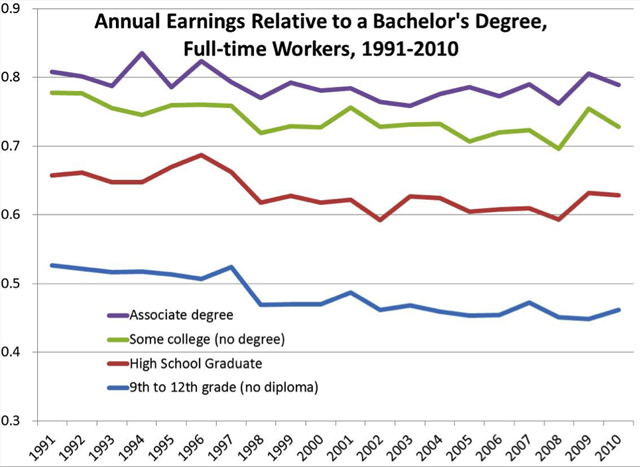 The U.S. Department of Education reports that inflation-adjusted tuition at all types of colleges rose, tripling over the past 20 years.

Minnesotans faced this challenge the same way other Americans did: by borrowing. The chart below shows state and federal grants growing slowly since 1991 while loans increased from about $200 million to just over $1.6 billion. 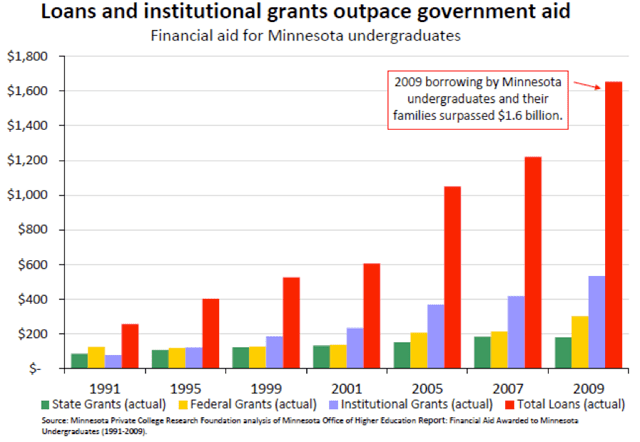 What does this mean for a typical student?  Nationally, the average level of student loan debt is about $25,000; however, this is a bit misleading because it doesn’t say anything about the range of debt loads. Derek Thompson of The Atlantic ran the numbers and found that the median student debt load was $12,500.  Further, 72 percent of college graduates owe $25,000 or less.