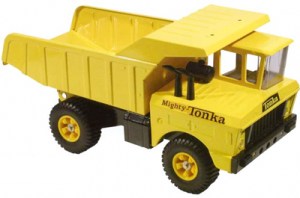 Pascal Lamy, director-general of the World Trade Organization, recently addressed the Economics Club of Minnesota.  His message, both in his speech and in a talk to students and faculty from the University of St. Thomas and from the College of Saint Benedict and Saint John’s University, was clear: “Trade improves the lives of people.”

In passing, Lamy noted: “There is another important part of the trade agenda for which change is urgently required — how we tell the story of trade.”  In particular, economists and policy makers emphasize the benefits of trade but don’t acknowledge the costs of trade. We need to change this.

I loved Tonka trucks when I was a kid and still have one in my office. I even visited the Tonka factory a couple of times on field trips in the 1960s and 1970s.

We don’t produce Tonka trucks in Minnesota anymore. We still buy Tonka trucks for our kids, but they are imported from abroad and we pay for them by selling cardiac pacemakers, iron ore and agricultural commodities.

Of course, we could still produce Tonka trucks here in Minnesota. That would require taking resources (workers, capital) and moving them out of agriculture, mining or medical devices and putting them to work assembling toys. It costs us less in terms of soybeans, corn, iron ore and pacemakers to send those things abroad and have them send us toy trucks than if we move resources directly out of those industries into toy production.

In economics jargon, Minnesota has a comparative advantage in products like medical devices because we can produce them at a lower cost in terms of lost toy trucks (and other goods) than can China or some other country. Similarly, Minnesota doesn’t have a comparative advantage in toys because the cost in terms of lost production is relatively high.

Economists tell these stories all the time and with good reason. As Lamy pointed out in his speech, “jobs tied to exports pay better, 6 percent better on average in the United States and 18 percent better in Minnesota,” primarily due to the specialization driven by comparative advantage.

Tonka Toys, Inc. is gone, and the jobs in the Mound factory are lost. One big problem with the story of comparative advantage is that it ignores these costs. In the basic story, workers and capital move from producing toys to producing pacemakers with little or no cost.

We know that’s not the way the world works. Someone who worked for years building toy trucks might not have the skills to assemble pacemakers, or they may not even want to do something different.

We always tell comparative advantage stories in our introductory economics courses. Lamy’s point is that we need to add the creative destruction story to our courses and our public-policy discussions.

Facing up to the costs of trade

“The link between trade and jobs is complex, and when making the case for trade we need to acknowledge that there are those who are hurt by trade,” Lamy noted. “We need to support programs that help get such people back on their feet.”

The most famous program to help workers displaced by trade is called Trade Adjustment Assistance (TAA).  Unfortunately, according to research reported by Timothy Taylor, managing editor of The Journal of Economic Perspectives based at Macalester College in St. Paul, TAA is “misaimed” and has only a limited effect.

For instance, Taylor quotes a study as follows: “Our results imply that while the TAA program may provide an income safety net, it does not help the average displaced worker who is enrolled in the program find new, well-paying employment opportunities.”  The same study, however, noted: “Although the income support, job and relocation payments, and other TAA benefits may not help workers find new, well-paying employment, training seems to improve employment outcomes for these workers.”

Minnesota’s economy continues to benefit from the greater opportunities for specialization and growth that trade affords us, but we incur costs in terms of lost jobs and industries when we avail ourselves of these prospects. This means that we have to work at both the state and national level to formulate policies that minimize the costs and maximize the benefits.

Let’s recognize that we all benefit from open trade but that we are currently allowing the costs to fall on citizens whose lives are disrupted, at best, and destroyed, at worst. We can hope that the private sector will deal with these problems, but hope is not a plan.