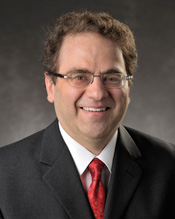 Federal Reserve Bank of Minneapolis President Narayana Kocherlakota recently delivered a speech titled “Monetary Policy Transparency: Changes and Challenges.” In his talk, Kocherlakota emphasized is that the Federal Reserve is now trying to be open about “principles regarding its longer-run goals and monetary policy strategy.”

That’s quite a difference from the days of Alan Greenspan, who once said: “I guess I should warn you, if I turn out to be particularly clear, you’ve probably misunderstood what I said.”

There was, however, a Greenspan-like paragraph near the end of Kocherlakota’s speech:

Inflation was distinctly higher in 2011 than in 2010 and continues to run above the FOMC’s [Federal Open Markets Committee] target of 2 percent. Even core measures of inflation, which strip out energy goods and services, and food, went up notably. I see these changes as a signal that our country’s current labor market performance is much closer to ‘maximum employment,’ given the tools available to the FOMC, than the post-World War II U.S. data alone would suggest. As I’ve argued in the past, appropriate monetary policy should be responsive to such signals.

What does that last sentence mean? In plain English: Kocherlakota believes that unemployment won’t fall much below 8 percent for the foreseeable future. This implies that there is not much slack in the economy and that we are in danger of accelerating inflation. The Fed should therefore begin raising interest rates soon and not wait until late 2014 as announced in their most recent statement.

This may seem like an issue that of arcane interest to economists, but it reflects a fundamental policy question that affects us all.

Inflation in the short run

First, the inflation rate that consumers, businesses and government believe will prevail in the long run, known as expected inflation, affects the current inflation rate. For example, if workers expect inflation to be 2 percent, they will push for wage increases of at least 2 percent to keep their inflation-adjusted income constant.  If, however, they believe inflation might hit 5 percent, they will ask for 5 percent raises, and if they are granted firms will end up raising their prices by perhaps 5 percent. Thus, the rate at which the public expects prices to rise affects the rate at which actual prices rise.

Second, unexpected shocks cause inflation to rise or fall in the short run. A rapid rise in oil prices, for example, would lead to a similarly quick rise in the short-term inflation rate. This is why, as I discussed in an earlier column, economists focus on the core inflation rate when they look at long-run inflation.

The third element driving short-run inflation is the output gap. This is the difference between what the economy is actually producing (real GDP) and what the economy could produce if all of its resources (capital, labor, etc.) were being used at their usual long-run levels. If the output gap is negative, this means there are lots of unemployed resources, and this puts downward pressure on inflation.  Similarly, a positive output gap implies that there are jobs going unfilled and that wages and other prices will probably rise faster than before and drive up inflation.

The size of the output gap is at the heart of Kocherlakota’s concerns.

How big is the output gap?

The red line in the graph below shows real GDP in the U.S. economy since 1981.  This is what our economy actually produced over the past 30 years. 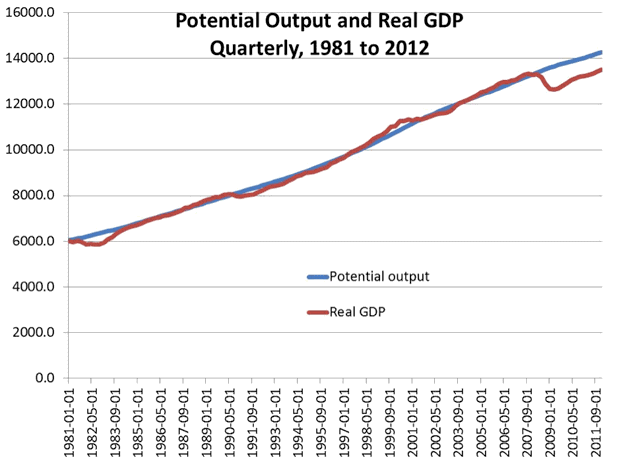 Take a look at the far right of the graphic: there’s a big gap between the red line and the blue line. Quantatively, this is a difference of about 8 percent, an amount we haven’t seen since the 1981-1983 recession. If these data are correct, there is a lot of slack in the U.S. economy and much downward pressure on wages and prices.

But, what if this is wrong? What if the Congressional Budget Office’s estimates of potential output are too high? This leaves us with the possibility that there is not as much slack in the economy as we think. We could go from a negative to a positive output gap without knowing it until it is too late, i.e. until we already have accelerating inflation on our hands.

James Bullard, president of the Federal Reserve Bank of St. Louis, first raised this possibility in March.  He wrote:

The discussion today has an eerie 1970s feel to it, in which many argued that the output gap was large and that monetary policy had to remain very aggressive to close the gap. The result was a global inflation debacle that took several decades to completely contain. Some say that if inflation increases, then we know how to combat it. That is true, but the hard-learned lesson of the 1970s was that if the inflation genie is let out of the bottle, it can be extremely difficult to get it back into the bottle.

At first glance Kocherlakota seems to be saying the same thing as Bullard, just more obliquely. But I’m not convinced that rising inflation is on the horizon. Yes, inflation is above the Fed’s 2 percent target, but is only around 2.5 to 3 percent.  This could be measurement error as much as any sign of rising inflation. This is why countries such as Israel and New Zealand set their inflation targets at a range of 1 to 3 percent rather than specifying an exact target of 2 percent.

In plain English: The long-run levels of unemployment and potential output are not immutable constants that we must live with. Rather, they can be affected by public policy but not by monetary policy. These policies will have costs and benefits, and it’s up to Congress and the President to weigh them.

This tells me that Kocherlakota is not simply fighting the last war and using the 1970s as a template for 2012. Instead, he is using theory and evidence to make the case that we might not be as far from our potential as we think, and warning us that if the output gap is fairly small, the Fed will be forced to raise interest rates.

But we have a way out: get the economy to grow faster. For that, we can’t rely on the Fed but must get our other elected officials to focus on growth.

Why the Minneapolis Fed’s Kocherlakota wants interest rates to rise