The media have spent the past week trying to get a handle on Paul Ryan’s public policy ideas.  Despite all that’s been written about Ayn Rand’s influence on Paul Ryan, I think that Milton Friedman’s book “Capitalism and Freedom” is a far better guide to understanding Ryan’s perspective on the role of government in society, generally, and on specific policy issues.

I first read “Capitalism and Freedom” in 1982.  Since then, I’ve re-read it every few years both on my own and with students in my introductory economics courses.  It’s a powerful statement about the role of government in a free society.

Then he notes, “Neither half of the statement expresses a relation between the citizen and his government that is worthy of the ideals of free men in a free society.”

He goes on: “The free man will ask neither what his country can do for him nor what he can do for his country. He will ask rather ‘What can I and my compatriots do through government’ to help us discharge our individual responsibilities, to achieve our several goals and purposes, and above all, to protect our freedom? And he will accompany this question with another: How can we keep the government we create from becoming a Frankenstein that will destroy the very freedom we establish it to protect?”

According to Friedman, “such a government would have clearly limited functions and would refrain from a host of activities that are now undertaken by federal and state governments and their counterparts in other Western countries.”

One function that Friedman believes is not government’s job is provisions for retirement. He writes: “The citizen of the United States who is compelled by law to devote something like 10 percent of his income to the purchase of a particular kind of retirement contract, administered by the government, is being deprived of a corresponding part of his personal freedom.”

Another government task to be questioned, in his view, is K-12 education.

According to Friedman, “Governments could require a minimum level of schooling financed by giving parents vouchers redeemable for a specified maximum sum per child per year if spent on ‘approved’ educational services.” Then he adds: “The role of the government would be limited to insuring that the schools met certain minimum standards, such as the inclusion of a minimum common content in their programs, much as it now inspects restaurants to insure that they maintain minimum sanitary standards.” 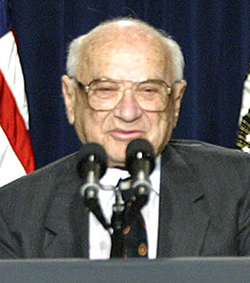 Ryan melds most of these two ideas in his proposals for reforming Medicare. Instead of the current fee-for-service system, Medicare would become a voucher program similar to the one Friedman proposed for K-12 education. Citizens would use the vouchers to purchase private health insurance, with the government ensuring minimum standards and annually increasing the size of the voucher based on economic growth and inflation. Ryan has proposed a similar system for Social Security as well.

Milton Friedman, who would have been 100 years old on July 31, had strong, clear views on Social Security, in particular, and on the welfare state more generally.

Paul Ryan shares many of these views, and the future of Social Security and Medicare might be very different if his ideas are adopted.