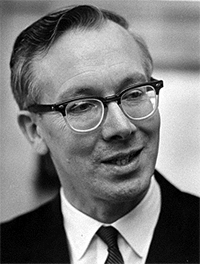 Walter Heller would have been 97 on Monday. From the 1960s until the mid-1980s, he was Mr. Economics in Minnesota through his newspaper columns, television appearances, and the quarterly economic outlook he published through National City Bank.

For years introductory macroeconomics at the University of Minnesota was built around Heller’s weekly lectures. When I took the course in the fall of 1980, they were on Tuesdays at 11:15 in Willey Hall. Eight hundred of my closest friends and I listened as Heller described the current economic situation (Ronald Reagan and supply-side economics were topics of opprobrium throughout the term) and told war stories about the Kennedy and Johnson administrations (“But the long shadow of the ambassador to India hung over the West Wing,” referring to Keynesian economist John Kenneth Galbraith). There was a one-inch thick, double-sided package of readings for the quarter (mostly written by Heller) in addition to the standard material we learned in our discussion sections on Monday, Wednesday and Friday.

This is the side of Walter Heller best known in Minnesota. However, Heller had a more profound influence on macroeconomic policy that continues to this day.

In particular, Heller transformed the president’s Council of Economic Advisers from a quiet, data-gathering group of economists in the 1950s into an active, advice-giving organization in the 1960s, one dedicated to the idea that government policy can play a constructive role in economic affairs. Whether or not this is the proper role of economists and economics has continued to inflame policy debates ever since.

Heller wrote a book, “New Dimensions of Political Economy,” shortly after leaving the White House. Here is the first sentence: “Economics has come of age in the 1960s.”

Confidence of the New Frontier

Throughout the book there is a confident, New Frontier tone describing how economists developed new tools that allow them to control the ups and downs of the business cycle and keep the economy on its long-term growth trajectory.

Heller later wrote that under Kennedy and Johnson, there was “a shift in policy focus from moderating the swings of the business cycle to achieving the full-employment potential of the economy. It was not enough simply to reverse recessions and temper expansions. Success was to be measured in terms of hitting a moving target, namely, the rising full-employment potential of the economy.  The point was to close the gap between actual and potential output without triggering inflation.”

Heller had reason to be sunny. The economy was in the midst of its longest peacetime expansion up to that time, one that began in 1961 and ended in 1969, according to the National Bureau of Economic Research.

This happy state of affairs didn’t last. Starting in the 1960s and continuing into the early 1980s, inflation and unemployment crept upwards, something that Heller and others at first didn’t think was possible. By the time they recognized their mistakes, it was too late.

Macroeconomic policy since the early 1980s has in many ways been a reaction to this experience, with two paths taken at different times.

The first is the activist path set out by Heller but now followed by economists on both the left and the right. For instance, when the economy started slowing down and went into recession in 2008 and 2009, the president proposed and Congress passed stimulus plans. In 2008, the president was a Republican, George W. Bush, and his stimulus package was one-third spending increases and two-thirds tax cuts.  In 2009, Barack Obama was president and the proportions of tax cuts and spending increases were reversed. All told, Congress enacted roughly $600 billion each of tax cuts and spending increases in order to keep the economy from contracting further than it otherwise would have done.

Robert Lucas, Nobel laureate in 1995, summarized the second path: “As an advice-giving profession we are in way over our heads.” He went on to say that economists should “make clear to our fellow citizens the questions that currently available expertise can hope to answer successfully, to base policy recommendations on the well-understood and empirically substantiated propositions of monetary economics, discouragingly modest as these may be, and to make it as clear as possible that the main task of monetary and fiscal policy is to provide a stable, predictable environment for the private sector of the economy.”

In other words, economists do not have the tools necessary to stabilize the economy and they should stop trying to do so.

Back in the winter of 1985, I was a graduate student at the University of Minnesota. I shared an office with five other grad students, and one late afternoon I was in the office with the door open.  In walked Walter Heller, asking what I was up to.  I told him that I was transferring to another school so that my wife and I could both get our Ph.Ds — hers in political science and mine in economics — and that since we had both been U of M undergraduates, it would be good for us to go somewhere else for grad school.

I also mentioned to him that I really wanted to study economic history, something that wasn’t being taught at Minnesota. His eyes lit up at that and we talked about how important he felt it was to understand economic history in order to do good public policy.

So happy birthday to the man who made a lot of economic history. Professor Heller, I wish you were around to see what’s going on today.