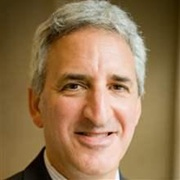 William G. Gale, the Arjay and Frances Miller chair in federal economic policy in the Economic Studies Program at the Brookings Institution, recently delivered the annual Clemens Lecture at Saint John’s University and the College of Saint Benedict.

Gale made two important points that deserve wider attention. First, overcoming federal budget deficits involves a combination of three deficits, each with its own causes and cures. Second, given the political situation in Washington, it might be best if Congress should go over the fiscal cliff that is approaching on Jan. 1 and then work backwards to fix our deficit problems.

The fiscal year 2012 budget deficit was $1.1 trillion, according to the Congressional Budget Office. The deficit fell by $200 billion compared with 2011, but this still amounted to more than 7 percent of GDP. 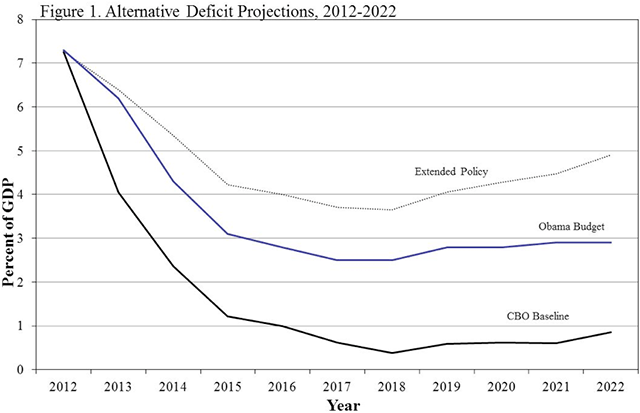 Gale presented three scenarios for future deficits shown in the graphic above. The CBO baseline predicts the deficit assuming that we go over the fiscal cliff on Jan. 1 — that is, all of the Bush tax cuts expire and all of the spending cuts enacted by Congress in 2011 go into effect between 2013 and 2022. Under this scheme, budget deficits fall from about 7 percent of GDP to about 1 percent over the next 10 years.

The extended policy line shows what will probably happen if we keep the Bush tax cuts in place and rescind all of the budget cuts. Deficits fall to under 4 percent of GDP around 2018 but start to rise again to about 5 percent of GDP by 2022.

The Obama budget curve illustrates the deficit path if the budget proposed by the administration back in February were enacted. Not surprisingly, it splits the difference between the CBO and extended policy projections.

Gale pointed out that these deficits are actually a combination of three underlying deficits: short-run deficits created by the recession, medium-run shortfalls caused by policy-induced imbalances between spending and taxation, and a long-run discrepancy created by rising spending on Medicare and Medicaid.

The short-run deficit is roughly 3 percentage points of the current 7 percent deficit.  The recession created this gap through reduced tax revenues and increased spending. Both of these are automatic in an economic downturn: taxes are proportional to income, so when income falls tax revenues fall, and spending rises via increases in unemployment compensation, food stamps and safety-net programs.

The short-run deficit disappears as the economy recovers between now and 2017, which is why all of the lines in the figure fall over that period. Now the medium-run shortfall becomes clear: even when the economy recovers, the deficit under the extended scenario remains at about 4 percent of GDP. Three policy actions of the 2000s drive this result. First, tax- rate reductions in 2001 and 2003 (the Bush tax cuts) permanently reduced revenues. Second, we waged two wars without raising taxes to pay for them. Third, Congress enacted Medicare Part D (the prescription drug benefit) without an increase in Medicare taxes.

Gale asked: Why not go over the cliff? Doing so dramatically changes the political context for both parties. For example, both parties could talk about how much taxes should fall relative to the new, higher rates that came into effect on Jan. 1.  Similarly, each party could claim credit for increasing government spending on defense, health care and other non-defense programs compared to the cuts that are supposed to take place over the next 10 years.

It’s important to keep in mind that despite the metaphor, we are not truly facing dramatic change on Jan. 1.  OMB Watch  put the matter well:

In reality, most of the effects will be felt only gradually and may not be felt at all if a new budget package is enacted early in 2013. On the tax side, some of the effects will be felt slowly, such as increased tax withholding, but others, such as increased capital gains taxes, will not be felt until returns are filed. Meanwhile, on the spending side, the administration will have enormous flexibility to mitigate the effects of sequestration on federal programs. If a new budget deal cancels sequestration, as is expected, it will likely be retroactive to Jan. 1, thus negating its impact.

Gale titled his lecture (and his forthcoming book) “Fiscal Therapy: A Rehab Program for America’s Debt Addiction.” Going over the fiscal cliff might be just the trigger to get both political parties to admit we have a problem and need help. In particular, allowing tax increases and spending cuts to take effect on Jan. 1 provides political cover for both Republicans and Democrats to do what needs to be done to solve both the medium- and long-run deficit problems.

It’s not pretty, but getting a patient into rehab rarely is.

Why not some fiscal therapy and go over the cliff?