The St. Paul Macy’s department store, which began life as Dayton’s, morphed into Marshall Fields and finally acquired its current name, is closing. This isn’t surprising. St. Paul pitched in to help Target Corporation remodel the store on the condition that it remain open for 10 years, and on Jan. 1 time ran out.

Unfortunately, this isn’t just a 10-year story of decline but the end of a 50-year effort to keep a major department store afloat in downtown St. Paul.  It involves some broad national trends in retailing along with some Twin Cities history.

As I described in earlier columns – here and here – American mass retailing took shape between 1880 and 1920 with the development of department stores, mail-order houses and chain stores.

The key feature of this system was centralization. In particular, department stores located in central business districts so that customers could travel via public transportation and goods could be delivered via railroads and short-haul cartage.

Private automobiles and the growth of trucking upended these arrangements starting in the 1920s. Customers now drove themselves to stores instead of taking public transportation or waiting for packages in the mail. Further, suppliers could ship goods by truck rather than rail, increasing the flexibility of retailers to locate their stores wherever they wished. So the advantages of department stores in urban centers and mail-order houses eroded and a new retail landscape developed.

The decentralization of retailing accelerated after World War II with the spread of strip malls, enclosed shopping centers and big box stores, all surrounded by ample free parking.

“On April 1, 1950, five brothers – Don, Bruce, Wally, Ken, and Doug – inherited equal shares of the controlling block of common stock of the Dayton Company.  At the time Sears, Roebuck was 40 times larger than Dayton’s.”

Thus begins “The Birth of Target” by Bruce B. Dayton and Ellen B. Green. In 132 pages, they tell the story of how the Dayton Company, which began with just a single store in downtown Minneapolis, evolved into Target Corporation.

Back in the 1950s, the brothers soon decided that they wanted to be more than just a local department store. They started meeting on Saturdays over lunch to make long-term plans. Over the next few years, they came up with a four-part strategy:

The expansion to St. Paul was tricky. As Dayton and Green relate, “St. Paul had always been loyal to its own stores. Years earlier, the Women’s League had even sponsored a sort of boycott of stores elsewhere – ‘Buy at home, Shop in St. Paul.’  Loyal to all its ‘Twin City’ customers, the Minneapolis store stripped the Dayton’s label from its delivery trucks to St. Paul during that time.”

After purchasing Schuneman’s, the brothers made a fateful decision. Rather than creating a copy of their downtown Minneapolis store, they hired Southdale’s designer, Victor Gruen, to create a new Dayton’s across the street from the existing Schuneman’s at 6th and Wabasha.  Essentially, Gruen designed a version of Southdale built in a downtown: a five-story, windowless, brick-clad department store connected to a seven-level (pay) parking ramp. The stores even looked similar (see photos below). 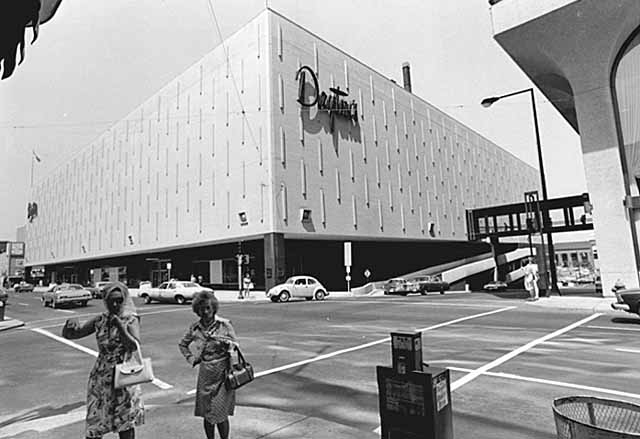 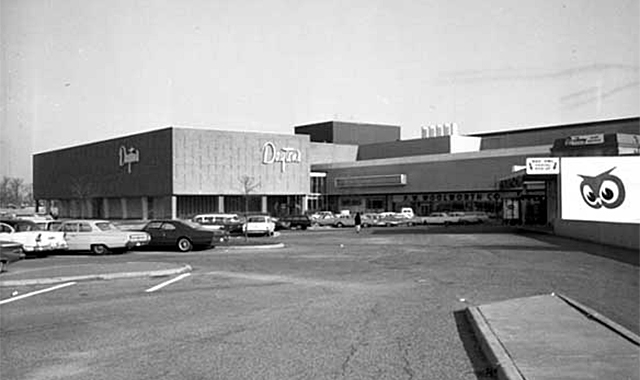 Skyways eventually connected the store to the rest of downtown, but the original vision was of a self-contained shopping destination, a shopping center built downtown.

Lessons for the future

In retrospect, three parts of the Dayton brothers’ four-part strategy worked. The downtown Minneapolis store did well into the 1990s, the free-standing shopping centers flourished and Target became the engine of growth for the entire company.

The experiment in St. Paul — and to a lesser extent in Rochester, Sioux Falls, and later Fargo and St. Cloud — failed. Dayton and Green write: “Though the new Dayton’s made a profit, the general decline of downtown St. Paul, like that of many American urban areas in the 1970s and 1980s, kept that store from growing to its full potential.”

The lesson was clear: trying to revitalize centralized, downtown shopping districts by building shopping centers didn’t work. Yet planners have continued to try variants of this formula over the past 30 years: Town Square in St. Paul, City Center and Block E in Minneapolis, Centre Square in St. Cloud.

The worst thing St. Paul can do is repeat these mistakes. Instead, the city needs to start by looking at how people shop today: at hyper-specialized stores (for example, the Apple Store), in general merchandise big boxes (Target) and, of course, online (Amazon).

Thinking through the implications of today’s retail environment is not as easy as tearing down an old building and putting up a new one, but it will help create a downtown that lasts.