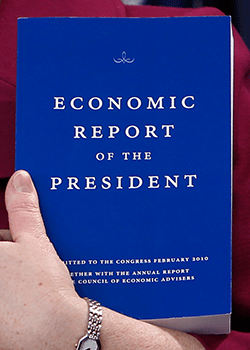 It’s that time of year again. No, I don’t mean spring break. The Economic Report of the President is here! Aren’t you excited? I am, though perhaps not as excited as Steve Martin when the new phone books arrive.

Why should you care? Because the Economic Report of the President is jam-packed with data and analysis that covers everything from fiscal policy and health care to agricultural policy and climate change. The data appendices, in particular, are one of the best one-stop sources for economic data that you can find. (Everything is in Excel files here.) Timothy Taylor, in his Conversable Economist blog, started an important series of posts covering the report and the Wall Street Journal has “Ten Economic Trends Through The Eyes of White House Economists.” And you can even read all of the reports since 1947.

So why does the White House issue this report every year? Let’s look at a bit of history with some Minnesota influences.

The Employment Act of 1946 was enacted in the wake of World War II concerns that the Great Depression would return once the war ended. The act reads:

The Congress hereby declares that it is the continuing policy and responsibility of the Federal Government to use all practicable means consistent with its needs and obligations and other essential considerations of national policy, with the assistance and cooperation of industry, agriculture, labor, and State and local governments, to coordinate and utilize all its plans, functions, and resources for the purpose of creating and maintaining, in a manner calculated to foster and promote free competitive enterprise and the general welfare, conditions under which there will be afforded useful employment opportunities, including self-employment, for those able, willing, and seeking to work, and to promote maximum employment, production, and purchasing power.

That’s a lot to pack into a single sentence. It reflects the fact that the act was controversial and passing it involved compromises on top of concessions made after fierce battles over the meaning of phrases such as “maximum employment.” (An entire book about the Act , “Congress Makes a Law: The Story Behind the Employment Act of 1946,” by Stephen Kemp Bailey, is still considered a political science classic.)

The act set up a mechanism for carrying out these goals. It established a Council of Economic Advisors to “to appraise programs and activities of the Government… and to formulate and recommend national economic policy to promote employment, production, and purchasing power under free competitive enterprise.” It also required the president to submit an annual economic report to Congress. And finally it created a Joint Economic Committee of the Congress “to make a continuing study of matters relating to the Economic Report.”

The Employment Act’s goals were quite broad and open to interpretation, and it was easy for both Congress and the president to ignore them, and that’s what happened under Presidents Truman and Eisenhower. This changed because of two Minnesotans.

The change started when President Kennedy appointed Walter Heller as chair of the council. (See my earlier column.) Heller viewed the council as a vigorous player in national policymaking and recruited an all-star team of economists, including three future Nobel laureates.

Then, Hubert Humphrey lost the 1968 presidential election. OK, it’s a bit more complicated than that — and the details of that story are told by Carl Solberg in “Hubert Humphrey: A Biography.” Solberg writes that after returning to the Senate in 1971:

Humphrey was greeted coolly. The man who had guided important legislation through the Senate, and then presided over it for four years, found himself ninety-third among one hundred on the seniority list. Nothing could be done about that, but Humphrey expected that, like Barry Goldwater returning as Arizona’s senator after his earlier try for the White House, he could at least be restored to his old committees.

Unfortunately, there was too much animosity remaining from the 1968 campaign and the Vietnam War for Humphrey to face, and so “the freshman from Minnesota ended up on Government Operations and Agriculture and, because nobody else wanted it, on the Joint Economic Committee.” (My emphasis added.)

But this didn’t stop him. Solberg notes: “Once again Humphrey pored over abstruse reports…  Once again he proved to be the Senate’s quickest study.  Enlisting the help of his old friend Walter Heller…he put on several ‘presentations’ – hearings at which he drummed on unemployment, deficits, the dollar drain, the administration’s ‘lack of monetary restraint’ in fiscal policies.”

The result of this work became the Full Employment and Balanced Growth Act of 1978, known also as the Humphrey-Hawkins Full Employment Act. As I discussed in my last post, Humphrey-Hawkins created the Federal Reserve’s dual mandate (promote both low inflation and low unemployment) and required that the Federal Reserve chair to report to Congress twice annually. Solberg noted that it was “the one measure that carried Hubert Humphrey’s name.”

I’ve often wondered, shouldn’t we have something like the Economic Report of the President for our state? We used to have one: the Economic Report to the Governor was prepared by the “Economic Resource Group, an organization of state research managers formed in 1985 for the purpose of improving economic analysis through interagency cooperation.” The report was produced annually from 1986 through 1992, then at four-year intervals in 1994, 1998 and 2002.

I have my own digital copy of the group’s 2002 report, which you can read here [PDF]. It has excellent chapters on productivity and wages, taxes and productivity, and a host of other long-run issues. Unfortunately, the official Web link to the report is dead, and the state apparently no longer provides links to the 2002 report nor any of its equally interesting predecessors.

This is a shame. Isn’t it time we brought back the Economic Report to the Governor, or something like it? We could have a database of Minnesota historical statistics that is as handy and useful as the one that available in the Economic Report of the President. We could have regular analyses of where the Minnesota economy has been and where it is going, all in one handy package.

There are plenty of organizations doing good work in these areas; two that come to mind are Minnesota Compass and the Minnesota State Demographic Center. Couldn’t we all get together and do an Economic Report on Minnesota every two years or so? Who’s with me? It would be fun.