Puzzles attract economists.  Let’s take a look at two of them involving labor — we just celebrated Labor Day, after all — and some of the explanations proposed by economists.

The labor force participation rate measures the fraction of the working-age population that either has a job or is searching for one.  Here is what it looks like since 1960: 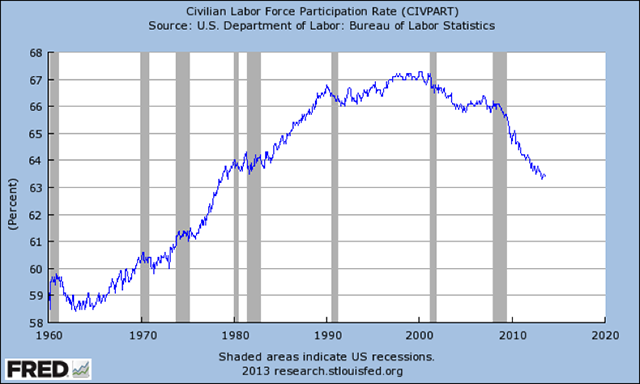 The rate rose from the early 1960s to a peak around 2000, driven primarily by the baby boom and by increasing labor force participation rates of married women with children. The rate started to drift down after 2000, then fell off a cliff during the Great Recession. The August jobs report just came out and the labor force participation rate fell yet again. It’s now at 63.2 percent, the lowest since July 1978.

The puzzle is not why the rate started to fall after 2000. This was to be expected given an aging population and no further growth in female labor-force participation.

The puzzle is why the rate fell so sharply starting in 2008 and stayed down since then. Put another way, why did 4 percent of the working age population leave the labor force over the past five years? There is no other period when the labor force participation fell by so much so rapidly.

Our second puzzle is the share of national income paid out in the form of wages and benefits, what economists call labor’s share. Here’s the picture: 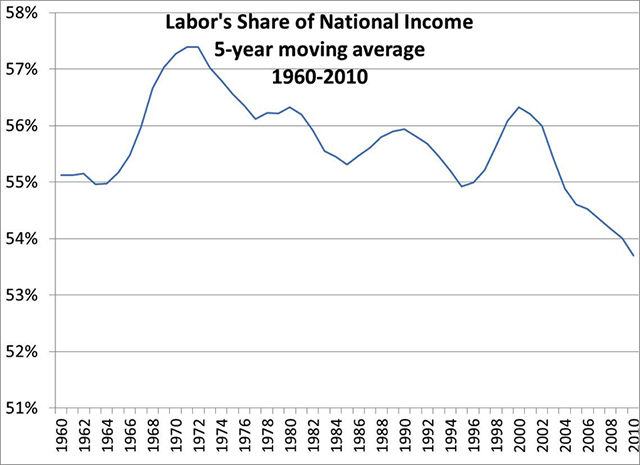 What’s even more puzzling is that this phenomenon is not confined to the US.  In a recent paper, Loukas Karabarbounis and Brent Neiman of the University of Chicago demonstrate that “the global labor share has declined significantly since the early 1980s, with the decline occurring within the large majority of countries and industries.”

Solutions to the puzzles?

So what’s going on? As you can imagine, there’s no single answer, but economists have proposed a variety of hypotheses about these puzzles.

One possibility is that these are not actually puzzles but are the result of a particularly deep and harsh recession. When the economy picks up steam both the labor-force participation rate and labor’s share will rise.

Another prospective cause is that this is not a short-run, cyclical problem but a long-term, structural problem. Tyler Cowen, an economist at George Mason University, is the leading proponent of this view. The title of his recent book says it all: “The Great Stagnation: How America Ate All The Low-Hanging Fruit of Modern History, Got Sick, and Will (Eventually) Feel Better.”  Technological progress slowed considerably starting in the mid-2000s, reducing the growth in the demand for labor and keeping real labor earnings in check. He argues that labor-force participation and labor’s share will bounce back a bit once the recession’s effects end but the trend fall in both measures will continue.

Finally, Erik Brynjolfsson and Andrew McAfee of MIT argue that Cowen has it backwards.  It’s not that technological progress has slowed; instead, we are involved in a “race against the machine” in which the machines are winning.  They write, “computers are now doing many things that used to be the domain of people only.” Further, “while digital progress grows the overall economic pie, it can do so while leaving some people, or even a lot of them, worse off.”

My hunch is that Brynjolfsson and McAfee are on to something very important.

In the 1920s, small electric motors replaced steam engines throughout U.S industry, while at the same time internal combustion engines in cars and trucks increasingly took the place of steam railroads in moving America’s people and goods. Both of these developments led to huge increase in output and productivity and but also caused massive disruptions in labor markets.

I have a hunch that we’re going through something similar today. It’s still a hunch, but that’s sometimes the first step in solving a puzzle.

Why is the U.S. labor force declining and struggling?