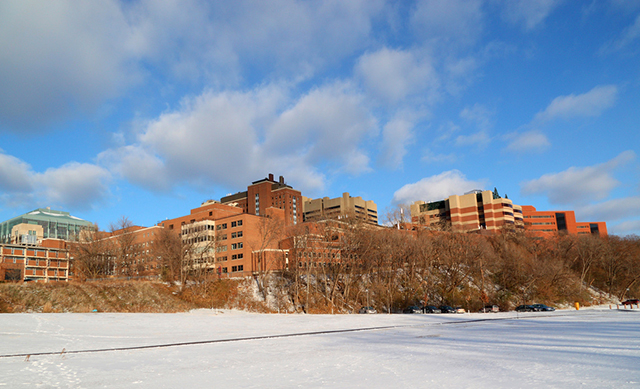 Creative Commons/A GudeThe Minneapolis Fed had cut its ties with two economists associated with the Department of Economics at the University of Minnesota, Patrick Kehoe and Ellen McGrattan.

The Federal Reserve Bank of Minneapolis got lots of press last week. It started Monday with a blog post, Problems in the Great White North, in which economist Stephen Williamson of Washington University wrote that Minneapolis Fed President Narayana Kocherlakota “has declared war on his own research department, and seems intent on destroying the place as a research institution.”

On Wednesday, Adam Belz of the Star Tribune wrote a piece describing what was up on Hennepin Avenue. The Minneapolis Fed had cut its ties with two economists associated with the Department of Economics at the University of Minnesota, Patrick Kehoe and Ellen McGrattan. Kehoe is the Frenzel Professor of International Economics and was a monetary adviser at the Minneapolis Fed.  McGrattan “will take a position with the University of Minnesota in January and will go on unpaid leave at the bank. She has been an adjunct professor at the U since 1993,” according to the Star Tribune.

By Thursday Minnesota Public Radio, the Financial Times and Bloomberg were covering the story, and on Friday the Wall Street Journal joined the club.  According to Bloomberg: “The Fed district bank’s board ‘fully supports the vision of its president, Narayana Kocherlakota, for the bank’s research department,’ Mary Brainerd, the board’s chairman, said today in an e-mailed statement. ‘Under his leadership, the bank has significantly expanded the size of its research department, adding diversity in skills and perspectives.’”

Why all of this attention for the research department of one Federal Reserve bank? Because the collaboration between the Minneapolis Fed and the U of M Economics Department has been fruitful for both parties and a model for other universities and Federal Reserve banks.

The Minneapolis Fed and the Economics Department began working together in the 1970s. In particular, economists such as Edward Prescott, Thomas Sargent and Christopher Sims did work that fundamentally affected macroeconomics and earned them Nobel prizes in 2004 and 2011. President Gary Stern and Director of Research Art Rolnick nurtured the relationship from the 1980s through 2009, when both men retired.

Chris Sims recalled the atmosphere at the two institutions during the 1970s during an event in his honor on Sept. 26. He noted that “we were rejects in the middle of nowhere,” with he and Sargent earning PhDs from Harvard but ending up here in “fly-over land.” It turned out to be a blessing, as the opportunity to work at the U and at the Minneapolis Fed encouraged a “rapid free flow of ideas,” especially because “we were all different and argued constantly.”

It helped that scholars on the coasts looked down on their work. Alan Blinder, who became vice chairman of the Federal Reserve in the 1990s and has been a professor at Princeton since the 1970s, once said:“Tom Sargent is a bit out of touch with the real world up there in his office in Minneapolis” as opposed to the real world of Washington.

Here are two suggestions to improve the relationship. First, the Fed and the U should broaden their association to include scholars from the Department of Applied Economics, the Humphrey School of Public Affairs, the Minnesota Population Center and the Carlson School of Management. Economists in all of these areas could bring their skills to the Fed and the research department could tap the skills and resources of these U of M researchers and programs.

Second, I hope they use this opportunity to broaden their reach and renown beyond macroeconomics. The partnership fostered a revolution in macroeconomics but has overshadowed important work in other areas carried out at the bank. For example, Thomas J. Holmes and James A. Schmitz, Jr have conducted path-breaking research on productivity growth in manufacturing, mining and agriculture; this is critical work to disseminate given that some economists such as Lawrence Summers are now talking about a “new normal” of lower productivity growth and slowly growing living standards.

The alliance between the Minneapolis Fed and the U of M Economics Department was the first of its kind and has been a model for this kind of collaboration. The St. Louis Fed, for example, is busy copying this model and creating a close relationship with Washington University. Nowhere, however, has the partnership worked as well as it has in Minnesota.

When Stern and Rolnick retired at the same time in 2009, I worried that there might be problems. I did not have doubts about the abilities of either Kocherlakota or his new research director, Kei-Mu Yi. Rather, 25 years of leadership from Stern and Rolnick had to have created a sense of “this is the way things are done” that would resist change. Any attempts to shake things up would be difficult if the changes weren’t handled delicately. It looks from the outside like the frictions couldn’t be overcome.

Belz quoted Nobel Laureate Ed Prescott as saying: “It sends a bad message.  Something very good is breaking down rapidly. Will something new rise out of the ashes? I think that’s what Narayana hopes, but I’m not optimistic.”

Perhaps, but I think this could be the start of a broader, deeper collaboration if each side enters into it honestly and in good faith. Here’s hoping that’s what happens.

Minneapolis Fed should expand — not limit — ties with University of Minnesota