“Needless to say, my tenure has been eventful – for the Federal Reserve, for the country, and for me personally.”
—Ben Bernanke, January 2014

Eventful is right. Just think what we’ve gone through since Ben S. Bernanke became chairman of the Board of Governors of the Federal Reserve System on Feb. 1, 2006. The biggest housing bubble in recorded history bursts. One of the worst financial crises of the past century sweeps the world. The Great Recession.

Last Friday, Ben Bernanke left the Fed for the last time. On Monday, Janet Yellen took over as Fed chair.

Who knows how long it will take economists and historians to sort through and analyze the economic history of the past eight years?  There’s so much to cover and so much to learn that, at least from the perspective of an economic historian like me, it’s an exciting prospect. But never far away in my mind is the tremendous human cost in lost homes, lost jobs, bruised and broken lives that tempers my enthusiasm and makes me more grimly determined to understand what we’ve been through.

Let’s take a look at the record of the Bernanke Fed and start gathering the elements for a story that promises to be told and retold in the coming years. 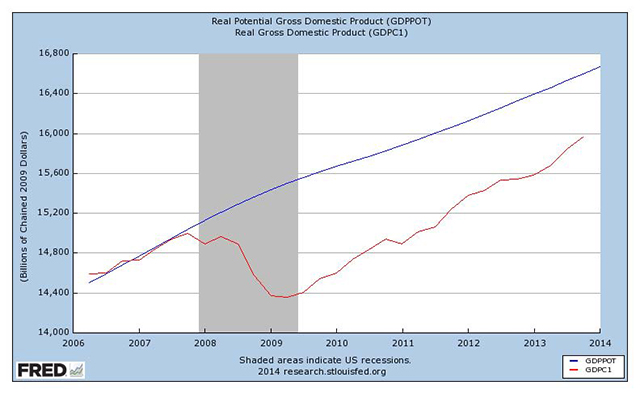 The graph above plots two versions of GDP: actual real GDP (red) and potential real GDP (blue). Actual GDP is just that: the total output of goods and services actually produced in the United States each year, adjusted for changes in prices. Potential GDP measures the same thing except that instead of actual production it measures how much would have been produced had unemployment been at its typical, long-run level, had plant and equipment been utilized at their long-run rates, and had technological progress continued to advance at the same pace as in earlier periods.

Notice that until late 2007 the two lines are pretty close together, but that after that they diverge. There’s the Great Recession. What’s been particularly Great is that unlike all other post-World War II recessions, the red line hasn’t snapped back toward the blue line within two years of their divergence. As to its second mandate, the Fed definitely kept inflation in check. Bernanke’s reaction to these events was to employ existing tools wielded by every Fed chair since the 1950s and to fashion and use new instruments that had only appeared in academic journals.

When signs of recession first appeared in late 2007, the Fed reduced its target for the federal funds rate – the interest rate banks charge to each other on overnight loans. This was standard procedure, and most economists expected the Fed to gradually lower this rate to either prevent a recession or, more likely, cushion the effects of a relatively mild downturn. 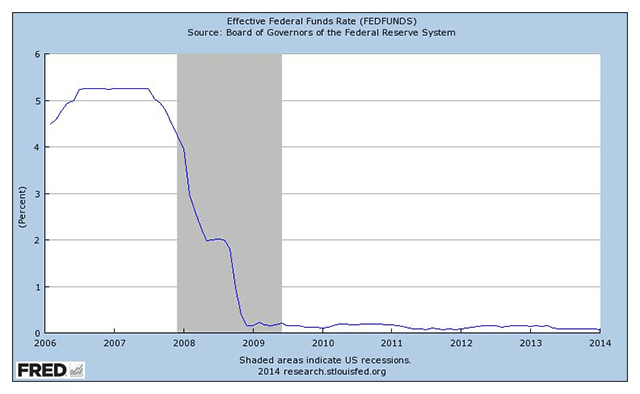 That’s not what happened. The financial crisis that began in slow motion during August 2007 and that reached a frenzy in September 2008 forced Bernanke to look outside the standard toolkit and do things no one ever expected.

First, the Fed lowered the federal funds rate to zero. Lowering the fed funds rate, but the leaving it near zero from the fall of 2008 until now is something that’s never been done before.

Second, the Fed (along with the Treasury Department) engaged in bailouts aimed at shoring up not only banks but also mutual funds and investment banks. The fear was that if these financial intermediaries failed, they would pull down the rest of the economy with them. The Fed thus engaged in rescue operations that were, at best, marginally within their purview but that followed Ben Bernanke’s refrain of “whatever it takes” to safeguard the financial system.

Third, the Fed started buying long-term Treasury bonds in order to reduce long-term interest rates directly. This is what came to be known as quantitative easing.

The road ahead for Yellen

The consensus among the most economists (but certainly not all) is that Bernanke’s actions kept the GDP gap from growing larger, from unemployment rising further, and from inflation falling and perhaps even turning into deflation. More bluntly, Ben Bernanke prevented a second Great Depression.

The problems that remain now sit on Janet Yellen’s desk, and there are many of them. Here are my top two concerns:

First, Yellen needs to manage the reduction of the Fed’s quantitative easing and its eventual move from zero percent short-term interest rates. As interest rates rise in the United States, investors will tend to pull their money out of places such as Argentina and Turkey and invest it in American assets. This will be tricky, as already evidenced by the gyrations we’ve seen over the past weeks in foreign exchange markets.

Second, Bernanke’s focus on macroeconomic matters meant that he and the board paid much less attention to financial market regulations and reform. This is an urgent matter, especially as it pertains to the role that large banks play in the financial system. As I wrote in an earlier column, Yellen needs support on the board in carrying out these reforms. Unfortunately, I don’t think that President Obama’s recent nominees will help much on this front as they are excellent macroeconomists but not seasoned regulators or financial market veterans.

Ben Bernanke has written eloquently on the Great Depression and other subjects in economic history. He recently accepted a position at the Brookings Institution and will be writing a memoir of his time at the Fed. I can’t wait to read his evaluation of the past eight years.

Goodbye, Ben Bernanke: We can’t wait to hear your story