What are the effects of a recession? If you ask a macroeconomist they’ll start with a picture like this: 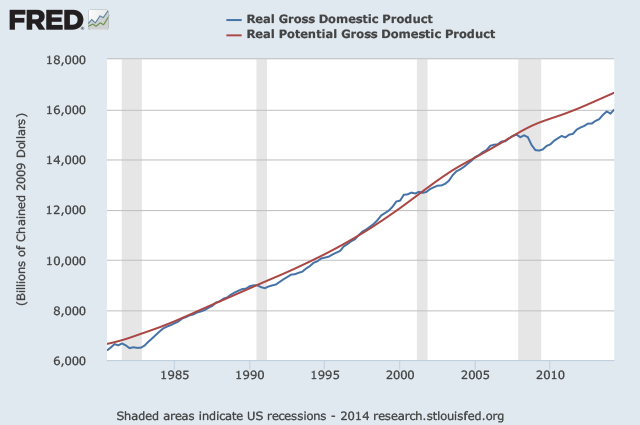 The blue line shows what the US economy actually produced each year (i.e. its real GDP) from 1981 through mid-2014. The red line traces out the economy’s potential output, i.e. the amount the economy would have produced each year had employment, capital utilization, and productivity grown at their usual rates.

The macroeconomist will then point out that there are gaps between the blue and red lines. Macroeconomists call these output gaps and measure them as a percentage of potential output; for instance, in the second quarter of 2014, the output gap was about 5 percent of potential. In essence: the bigger the gap, the worse the recession.

A five percent gap may sound small. But it means we’re not producing about $800 billion dollars of goods and services that could put people to work, put income in their pockets, and reduce the unemployment rate.

This story is fine, as far as it goes. But it raises another question: Does potential output fall or grow more slowly when there is an especially harsh recession? In other words, do recessions damage an economy in the long run as well as the short run?

Laurence Ball of Johns Hopkins University tackled this question in a recent paper. His answer: yes, recessions harm economies both in the short run and in the long run. In particular, Ball notes that “potential output falls because a recession reduces capital accumulation, leaves scars on workers who lose their jobs, and disrupts the economic activities that produce technological progress.”

For instance, the chart below (drawn from Ball’s paper) shows the US situation: 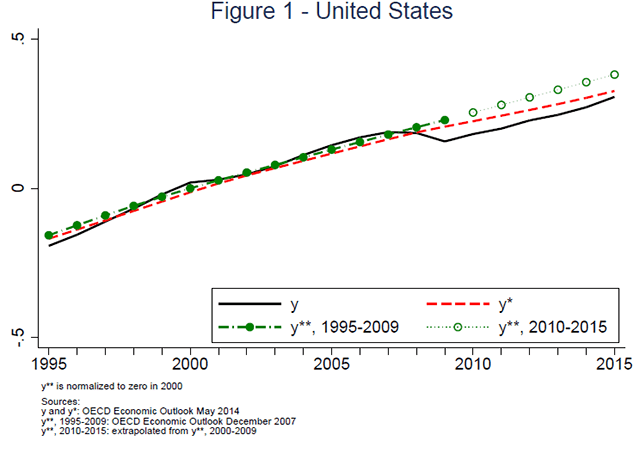 The ­black line shows what happened to US GDP from 1995 to the present. The green line with the circles shows the path of potential output up to 2009 and what economists predicted it would do after that.

The red line shows the long-term effects of the Great Recession: potential output is both lower than it was predicted to be after 2009 and it is growing more slowly. As Ball puts it, in the US “potential output has fallen significantly below its pre-crisis path, but the current growth rate of potential is not far from its old normal.”

That’s not the case, however, in countries that were hit harder by the recession. Take Ireland: 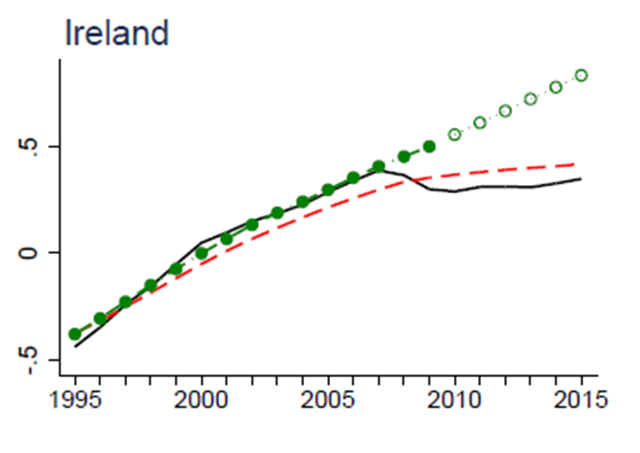 Here, potential output is significantly lower than it was predicted to be and it is growing far more slowly after 2009 than it was before then.

Greece, Hungary, Spain and a number of other countries exhibit the same pattern: The current recession caused large output gaps and high unemployment in the short run, and if current trends hold the Great Recession will damage the long run potential of these economies for years to come.

It doesn’t have to be this way. History tells us that despite a deep recession, potential output can both continue to grow and even grow at a faster rate.

Alexander Field of Santa Clara University makes this point in a series of academic papers and in his book A Great Leap Forward: 1930s Depression and U.S. Economic Growth. (Field presented his findings in a talk at College of Saint Benedict and Saint John’s University this past March.) In particular, he analyzed U.S. data from the late nineteenth century to the present and found that potential output grew more rapidly from 1929 to 1941 than any other period in U.S. history.

Field focuses on two important factors behind this great leap. First, the U.S. government invested in infrastructure, generally, and the road network, in particular. This both increased the growth of physical capital and created benefits for the private sector by allowing for rapid productivity increases in trucking, warehousing, distribution, and public utilities.

Second, “government- and university- financed research and development during the 1930s provided the foundation for the acceleration in both housing construction and housing productivity (flow of real rental services per unit of housing capital) that took place between 1948 and 1953 and continued at somewhat slower rates in the postwar period.”

In fact, the accelerated productivity growth of 1929 to 1941 had deep, long term benefits. It first created the foundation for our ability to quickly mobilize production in 1940-41 and maintain output at high levels throughout World War II. It also provided the basis for high rates of growth from 1945 until the early 1970s by putting in place a transportation and distribution network that could be utilized and improved for years to come.

The lesson for today is clear: We are missing a golden opportunity to enhance our future living standards by not investing in broadband networks, scientific research, and our nation’s human capital that are possible today with interest rates at historic lows. The recession damage identified by Ball is real and deep. However, rather than being an inevitable consequence of deep recessions these effects are self-inflicted wounds that can be mitigated and even reversed through government policy that focuses on investments in long-term growth.

Why the Great Recession was even worse than you thought