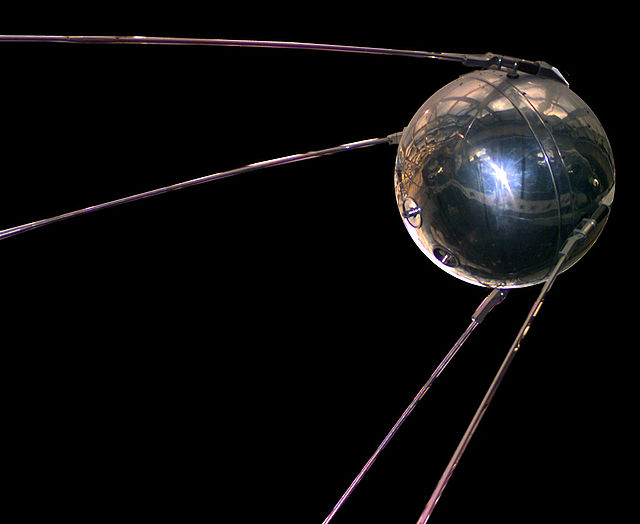 NASA
A replica of Sputnik I sits in the U.S. National Air and Space Museum.

So how did you celebrate Sputnik Day?

On October 4, 1957, the Soviet Union launched the first artificial satellite, Sputnik. It spurred a space race between the USSR and the United States, eventually leading to President John F. Kennedy’s challenge in 1961 that “this nation should commit itself to achieving the goal, before this decade is out, of landing a man on the moon and returning him safely to the earth.”

That the Soviet Union would attempt to send a satellite into orbit was no surprise, at least to scientists and intelligence analysts. In fact, scientists knew Sputnik was coming because the USSR and U.S. announced that they would launch satellites as part of their scientific work during the International Geophysical Year (IGY) in 1957-1958. According to historian Yanek Mieczkowski, “the IGY aimed to let the world’s scientists pool talent and cooperate to study the earth’s geophysical properties, including its atmosphere, gravity, and climate.”

The analysts knew about the Russian rocket and satellite programs because of the U-2 spy planes that had been flying over the Soviet Union since 1956, giving the CIA and the Defense Department clear pictures of what was going on there.

President Eisenhower’s initial reaction to Sputnik was therefore muted, congratulating the Soviets on their scientific achievement and assuring Americans that we would soon launch our own satellite, Vanguard. Unfortunately, the results of our efforts weren’t pretty, and the U.S. satellites were soon dubbed Flopnik and Kaputnik.

But Democratic politicians such as Lyndon Johnson, then the Senate majority leader, saw Sputnik as an opportunity, especially with the 1958 midterm elections and the 1960 presidential election on the horizon. Cries of a “missile gap” and complaints that the U.S. was falling behind the Soviet Union economically soon rang throughout Washington and the nation, goaded on by the Sputnik’s beeping signal coming from space.

We now know that these numbers were wrong. Here’s what GDP per capita actually looked like for the US and the USSR during the 1950s:

Fifty-seven years later, the moon landing is only the most conspicuous result of Sputnik’s launch. There are many others. Let’s start with our communications systems. Sputnik proved the feasibility of launching rockets to orbit satellites, and by August 1960 the United States had sent aloft the first communications satellite, Echo 1.

Built by G.T. Schjeldahl Company in Northfield, Minnesota, Echo was a Mylar balloon that allowed ground-based transmitters to bounce signals off its shiny surface. Within two years, the United States launched Telstar, the first satellite that could actively receive and resend radio and television signals.

Orbiting satellites now constitute part of the economy’s essential infrastructure, providing key links in the world-wide communications network (including the Internet) and are the foundation for the Global Positioning System (GPS) that many of us take for granted.

Crash programs of many kinds came out of Sputnik, but one of the most long-lasting and important effects was the one on American education. Many Americans inferred that by getting a satellite into space first, the Soviets were doing a better job of educating their citizens, particularly in science and engineering. Further, the apparent surprise of the Sputnik launch led some to argue that the U.S. needed more people who spoke Russian, Chinese, and the other languages of our Cold War opponents.

These fears resulted in the passage of the first federal aid to elementary and secondary education, and the first federal student loans for college. Before Sputnik, elementary and secondary education was strictly a state and local matter, with funds raised only within school districts and occasionally through statewide taxes. After Sputnik, the Eisenhower Administration proposed, and Congress passed, a series of programs to fund school construction and to help school districts hire teachers in science, math and languages.

Before Sputnik, the GI Bill was the only source of federal aid for college students. After Sputnik, Congress passed the National Defense Education Act, providing federal loans to students studying math, science, engineering and languages.

Since Sputnik, the federal government has been involved in education at every level, and this played an especially important part in the massive expansion of higher education in the 1960s.

So now you know why you should mark October 4, 2015 on your calendar and celebrate Sputnik Day — like we do at our home. You’ll never think of your student loan or your GPS in quite the same way.

Enjoy the Internet, GPS or student loans? Then you should celebrate Sputnik Day