I recently had the honor of delivering the keynote address to the Theta of Minnesota Chapter of Phi Beta Kappa at the College of Saint Benedict and Saint John’s University. The Society “celebrates and advocates excellence in the liberal arts and sciences.”

Phi Beta Kappa was founded at the College of William and Mary in Williamsburg, Virginia, on December 5, 1776. This year is important for another reason. On March 9, 1776, a professor of moral philosophy at the University of Glasgow named Adam Smith published a book: “An Inquiry Into the Nature and Causes of the Wealth of Nations.” That book, which we usually refer to simply as “The Wealth of Nations,” is the founding document of my discipline, economics.

So, what is so special about that time that it would produce “The Wealth of Nations” and Phi Beta Kappa?

Like any good economist let me start with a picture… 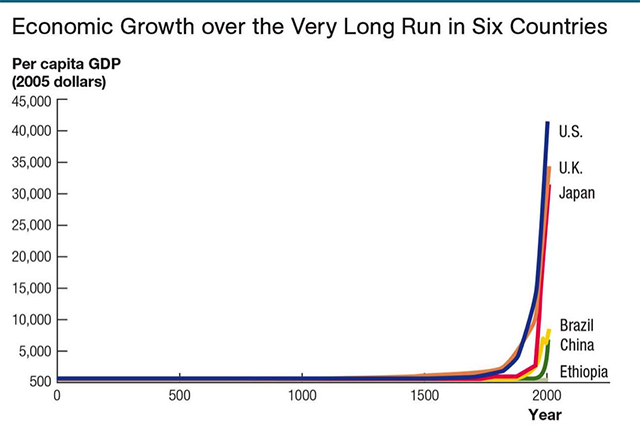 I’ll call this the Hockey Stick of Economic Growth. The vertical axis measures income per person, the horizontal axis measures time, and together they chart economic growth across the globe. Notice that the blade curves away from the handle somewhere around 1750 or so.

Let’s take a closer look at the picture, starting at the left side. To the best of our knowledge, average incomes 2000 years ago were pretty much the same all over the planet, and they stayed that way until around 800 years ago. Then, we start to see things change, especially in areas of Europe (England, the Netherlands, Spain, and Italy) and east Asia (eastern China, Japan, and Korea). Standards of living started improving in these areas. Population grew as well, both in quantity and in density.

These patterns intensified between 800 and 500 years ago, especially in western Europe. Not all was going well, however. Plagues, infectious diseases, and war regularly wiped out large numbers of people with the result that population and income would grow rapidly, fall, and then grow again. But, starting in the 16th century both standards of living and population started growing, consistently, year after year, in western Europe. This trend intensified and spread in the 17th and 18th centuries, and then exploded in the 19th and 20th centuries.

The Nobel laureate Simon Kuznets labeled this phenomenon Modern Economic Growth and it has led to standards of living beyond anything Adam Smith imagined in 1776. It has also led to income disparities of stunning proportions among the nations of the world.

How did we uncover this vital story? Archeological and anthropological evidence on factors like caloric intake and shelter; written accounts of daily life in various parts of the world; evidence on climate and how it would have affected growing seasons and yields; and economic analysis of wages and prices over time and across countries all contributed to our understanding of this phenomenon. In short, we know this because hundreds of scholars have carefully applied all the tools in the liberal arts toolkit to help us understand standards of living across time and space. It’s been a group effort.

This leads to another question that has intrigued me for 30 years: How can standards of living be so different in the US, Brazil, China, and Ethiopia? We all live on the same ball of dirt. We’re all made of the same DNA. So, why such startling differences in economic growth?

One answer, associated with the UCLA professor Jared Diamond, is that Europeans got rich because they had “guns, germs, and steel” that allowed them to exploit the human and material resources of the Americas, Africa, and Asia. This process made Europeans wealthy and impoverished the rest of the world.

There is a lot of truth to this story. Europeans did commit atrocities, gouge out mineral wealth, and enslave peoples. However, it turns out that the particular Europeans who most relied on this recipe were not the ones who got rich and then kept getting richer. The conquistadors of Spain and Portugal, for instance, got rich early on by exploiting the people and resources of the new world but were falling behind the rest of Europe by 1750. Put another way, Diamond’s story tells us why the hockey stick bent initially but not why it kept surging upward from the 1750s onward.

So, what propelled this upward growth? The answer economic historians put forth is productivity, i.e. using resources in new and more efficient ways. This is where the liberal arts again come into the picture.

Timing of the bend: 1776 and the Wealth of Nations

How did this increased productivity happen? There are a variety of explanations that emphasize different factors (e.g. the spread of literacy, changes in societal values) but the short version is that the bend in the hockey stick was a product of the Enlightenment, in general, and of the scientific revolution, in particular, which grew out of it. The Enlightenment elevated reason and gloried in the power of human beings to comprehend and alter the worlds of art, science, and politics. This spurred innovation in many areas of life including science and technology. 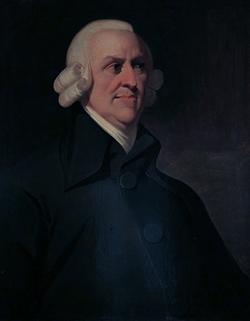 Here I want to highlight an argument made by Joel Mokyr, an economic historian from Northwestern University. Mokyr argues that the scientific enlightenment of the 16th and 17th century took root and spread in places such as England and Holland which then generated the industrial enlightenment in the 18th and 19th century.

What was needed, in other words, was the spread of the liberal arts, especially ideas developed in philosophy, politics, natural science, and a variety of areas we today would label social science.

Thus, Adam Smith conceived of “The Wealth of Nations” when he did because that’s when the hockey stick was bending, and the stick was bending because the fruits of the spread of the liberal arts were bursting out everywhere he looked and generating huge improvements in the wealth of nations. He felt compelled to explore this astonishing transformation.

How does this relate to today and our ongoing debates about higher education? Some politicians dismiss the liberal arts with comments such as, “The state should not subsidize intellectual curiosity.” Others ask, “Is it a vital interest of the state to have more anthropologists? I don’t think so.” My answer is that intellectual curiosity and the liberal arts are vital interests because they help produce citizens equipped to live in a free society and because they drive the wealth of nations. Countries that suppress the arts and humanities, underfund basic scientific research, or mock the social sciences as codified common sense are the ones that find themselves growing more slowly or slipping into stagnation (see, for example, this piece by Mokyr.)

This is where Phi Beta Kappa and other strong supporters of the liberal arts come in. To quote the great philosopher Stanley Martin Lieber (aka Stan Lee), “With great power comes great responsibility.” We must be advocates for the liberal arts, for intellectual curiosity, for enlightenment because they are the mainspring of human betterment culturally, philosophically, and economically.