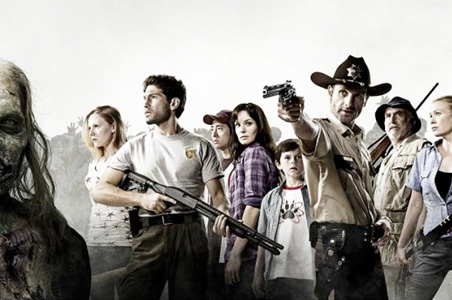 Courtesy of AMC
AMC’s “The Walking Dead”: a product of our current era of comic books.

You’d think plastic surgery would inspire more horror stories. At least in its popular conception, it’s got all the right details: vanity, surgery, and a potential for horrifying mishaps. Plastic surgery has produced at least a few things that are commonly seen as monstrous, such as Michael Jackson’s last face, or Amanda Lepore. And, as with all surgery, plastic surgery can be fatal: You may remember that Kanye West’s mother died a few years ago after a tummy tuck and breast reduction.

There’s great potential for horror here, although of an especially queasy kind, and it’s been toyed with before. There was a character in “Brazil” by locally born filmmaker Terry Gilliam. She went into a precipitous decline after a series of surgeries and wound up nothing but bones and fluid in a box. Nathanial Hawthorn actually tackled the subject all the way back in 1843 in a story titled “The Birthmark,” about a husband obsessed with removing what he saw as his wife’s one flaw. There was a 2006 South Korean film called “Cinderella” about plastic-surgery addiction. But plastic-surgery-themed horror stories are few and far between.

This year, a local illustrator named Will Dinski put out a small, very appealing graphic novel called “Finger Prints,” addressing the subject. In brief, the story tells of a philandering plastic surgeon, his movie-star clientele, and an assistant who has figured out how to simplify the process of remaking a human face, with disastrous results.

Dinski is a graduate of MCAD’s program in comic art, a program that is part of the reason Minneapolis is a very good comics town. Dinski has an appealing style here, favoring panels that are small and tall and usually centered on one character, which alternate with entire panels dedicated to dialogue, even when the dialogue consists of one word, such as “Everyone.” I have not seen this done before — usually, cartoonists fit their dialogue into the same frame as their illustration, which can lead to cramped composition, or dialogue being spread out over several panels. Since each panel usually represents a progression in time, this can make it feel like a character is taking an awfully long time to make his point. Not so with Dinski. This approach also gives the sense that the dialogue is just as important as the illustrations — two panels side by side sort of resemble a book with an illustration on the verso page and text on the recto page, or a silent movie, which pauses to put up title cards to tell you what people are saying.

Dinski has a deceptive simply drawing style, favoring bold outlines and simple shapes — he usually represents noses as a curving triangle, except in the case of the surgeon, whose nose is rather more like three sides of a rectangle. But he puts an awful lot of character into these images — he’s especially good with eyes, which are lively and frequently have a sardonic or suspicious quality. He has a talent for representing his characters’ mood just by how they hold their body: in one notably instance, he shows the surgeon’s wife, having succumbed to depression, splayed out, face down, on her bed. More tellingly, her socks are hanging off her feet, as though she just doesn’t have the energy to either remove them or pull them up.

I won’t give away the details of the story, but I will comment on the end, or, more properly, ends — the story closes with an ironic climax, but then adds on an apocalyptic coda. Usually, in modern apocalypses, the world is swarmed with flesh-eating zombies; you have to credit somebody who swaps them out with plastic-surgery victims.

Speaking of a world swarmed with flesh-eating zombies, AMC just completed its abbreviated first season of “The Walking Dead,” which, if you missed it and have a taste for such things, can still be viewed online. “The Walking Dead” is also a product of our current era of comic books — I’m not sure what to call it, as both “The Golden Age” and “The Silver Age” have been taken, but this is quite a good time for comics and deserves its own precious metal.

“The Walking Dead” was quite popular as a comic book, written by Robert Kirkman (who also scripted an episode of the show), especially as it dealt honestly and brutally with the experiences of survivors of a global apocalypse — life for them was nasty, brutish, and short. The televisions series was created and overseen by Frank Darabont, who scripted “The Shawshank Redemption,” which contained some moments of writing that were as fine as anything I have ever seen on film. Darabont is a good match with this material, despite having strayed quite a bit from the original comics, to the howls of frustration of fans.

The zombies in this series are standard-issue George Romero ghouls, revived after death, ravenous for flesh, and requiring a coup de gras to dispatch. And the story is also standard-issue Romero, in that it’s a world taken over by these zombies, and survivors band together for safety, but people being what they are, this creates as many — and as dangerous — problems as it solves. But the series does something Romero couldn’t, and it is what television is especially good at doing: following a narrative over a long period of time, and seeing how it affects and changes the character. Especially interesting is the story’s primary protagonist, a small-town sheriff named Rick Grimes, played by Andrew Lincoln. Grimes is the sort of character who doggedly does what he thinks is right, which can be an appealing character trait in a relatively safe world and an absolutely deadly one in an unsafe world. The show has taken care to show how Grimes’ steely heroism has repeatedly put the people he has sworn to protect in danger.

This is a zombie story, so if you’re turned off by gunshot wounds to the head — well, there are an awful lot of them in this series, accompanied by a spray of CGI blood. But it’s more discreet than the violence in a Romero, which is imaginative but also famously gruesome. No, the violence here happens quickly and then is done, leaving those who remain to deal with the repercussions, which seems very true to the way violence happens in the real world.

My only complaint is that, for the most part, the survivors looks great. Just beautiful. The truth is, a few weeks after a catastrophe that shuts down water, toiletries, hospitals, and food supplies, most people are going to be pretty indistinguishable from zombies. Maybe this group has a heck of a plastic surgeon.