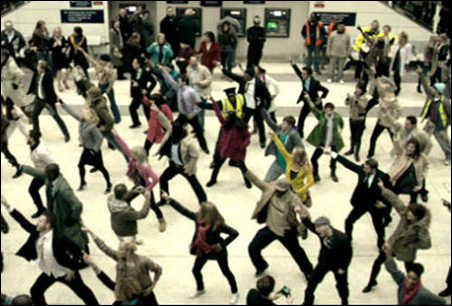 BTAA
A clip from the British Television Advertising Awards at the Walker Art Center.

Here’s an interesting question: Marianne Combs, who writes for Minnesota Public Radio’s arts desk, has been rounding up arts coverage (a recent example). She noticed that there is an awful lot written about local arts, and so, on her Facebook page, she asked a question of local artists: “So what’s everyone complaining about?”

A long discussion of arts coverage followed. It’s an interesting one, if perhaps academic. Arts writers are necessarily constrained by deadlines, the requirements of their editors, and the expectations of their audience. As a result, arts writing tends to take the form it must, rather that what we wish it would be.

For instance, Charles Campbell — co-founder and co-artistic/managing director of the Skewed Visions group — responds, saying, “I’d like to see more of the critical engagement and fewer of the reviews.” He later adds: “Reviews judge entertainment value, critical engagement addresses the place of the work in a broader discourse — as part of a public dialog about the ideas and their representation in the work.”

I agree, that would be marvelous. I also suspect the actual audience for that would mostly be made up of arts critics and the people who make arts, especially when you’re dealing with the mainstream press. But, then, for a lot of disciplines — especially theater and dance — a good portion of a critic’s readership actually is people in the performance community. It’s a tricky line to draw, as the wants of an audience are going to be different from the wants of an artist, and both are a critic’s readership. But kudos to Combs for asking the question — critics too often maintain a professional distance from the subjects of their interviews. I find this sort of engagement far more challenging and interesting, but it does put a critic in the awkward circumstance of suddenly being the subject of criticism.

But I can answer Combs’ question in another way. Artists complain because, no matter how much coverage there is, there’s just too darn much going on in the Twin Cities to be truly comprehensive. And this means that every time you’re writing about one thing, you’re not writing about something else. Take the Walker Art Center as just one example. At this moment, I could write about the Alec Soth exhibit, or the Yves Klein show, or its “A Shot in the Dark” collection. And, oh my God, could I go on about every one of these. They deserve exactly the sort of critical attention that Campbell requested. And I’ll probably get to them when I can — there’s an Yves Klein judo thingy coming up that looks irresistible. But for now, I’ll just detail one of the myriad programs at T.B. Walker’s gallery, as it’s been selling out and I saw it this weekend.

Specifically, I refer to their annual British Television Advertising Awards, in which the Walker screens two dozen or so commercials selected by a jury of advertising executives. Now, I’m not sure the British actually have us beat for advertising excellence, but, then, if we wish to see an American ad, we just need flip on the television. The commercials are great fun and occasionally good art — although, just as audiences and performers might have different taste in criticism, audiences and advertising executives have different standards when it comes to advertising excellence. I have consistently found that I prefer the awards’ also-rans to their gold awards, which this year were dominated by a nicely animated but otherwise uninspiring commercial featuring a Russian meerkat’s attempt to steal business from a website. And their self-declared best video of the year was a flash mob in Liverpool Street station that offers nothing but the unnerving idea that British advertisers somehow are just now getting wind of a fad that is seven years old, and one that grows more irritating as it is transformed from a spontaneous collective performance into an uninspired advertising gimmick.

But throughout the show there are real pleasures to be had, such as a commercial for Pimms liquor, which has never really caught on in America, that features some of the most delightful consumed design I have ever witnessed. There’s an epic (and epically entertaining) video — narrated by a shrieking hard rock number — about a boy who was born to rock and roll but grew up to work a series of menial jobs, and who just can’t help but spontaneously and unthinkingly exhibit rock-star behavior. There’s a Guinness ad in which a celebration of the beer’s founder, Arthur Guinness, becomes a worldwide game of telephone in which people toast whatever they have misheard “Arthur” as being — llamas, Martha, and martians included.

Of course, the pleasure of this show relies, in great part, on their newness, and I can’t help but wonder if that will long be the case. Almost all of them are available on YouTube just now, and I had already seen at least five of the commercials prior to going to the show. Many of them were designed to go viral — another irritating advertising fad, resulting in an infinite number of YouTube videos in which pseudodocumentary footage purports to show people doing impossible things, such as playing soccer while bullfighting, which shows up in the collection. Those sorts of videos are probably better left on YouTube.