For whatever reason, our Christmas is essentially Victorian. Clement Moore’s “The Night Before Christmas” is from 1822, just a decade before the start of the reign of Queen Victoria. “A Christmas Carol” was published in 1843. Plum pudding? Victorian era. Santa Claus? As we know him now, as a jolly fat man in red suit with sleigh and reindeer, yes — Victorian.

But there are older Christmas traditions, some thankfully set aside — or regretfully, depending on your daredevil sensibilities. The Vikings, as an example, are supposed to have set fire to a gigantic wreath and rolled it down a hill, which is far more exciting than our tradition. And, in the Middle Ages in England, there were mystery plays. These were communal events telling tales from the Bible, performed by artisan guilds on the back of decorated carts called “pageants.” And, amazingly, one has been kicking around the Twin Cities for more than two decades, in one form or another.

In its medieval conception, it was called “The Second Shepherd’s Play,” part of the Wakefield Cycle of mystery plays that kicked around West Yorkshire in the 12th century or thereabouts, and told the story of an English sheep thief who somehow winds up at the birth of Jesus. And it hasn’t changed that much — there’s still a sheep thief, there’s still the birth of Jesus, although, in its current incarnation, the devil is one of the main characters. 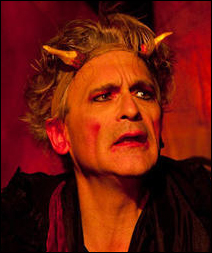 Now titled “The Holiday Pageant,” the production is a generally annual Christmas undertaking by the Open Eye Figure Theatre. From the sounds of things, it was a collaborative creation — it started out as a skit performed in the house of Michael Sommers and Susan Haas, who run the theater. But it took form over the years, aided by a wickedly funny script by Sommers, all written in rhymed couplets and the frequent accompaniment of a brass band. I’ve seen it three times, by my count, and it’s a rowdy affair, filled with knockabout comedy and purposefully juvenile humor, recalling another Christmas tradition — the English pantomime.

Usually the devil doesn’t get this much stage time as he does in the production — he’s a constant presence, cackling over the play’s events and attempting to influence its outcome with the help of a bumbling assistant. Why so much Satan? He’s played by Michael Sommers, and his frequent castmate and collaborator Kevin Kling told me several years ago that this role was inevitable for Sommers. “I ran into his mother once and she told me that when he was a boy, everybody wanted to be angels or wise men, but Mike always asked to be Satan,” Kling said.

Sheep thieves and diabolic interference aside, it’s still recognizably a Christmas play, including cookies and hot cider. “The plays has snow and a manger scene,” Kling told me. “How much more Christmas can you get? Come on!”

While we’re looking backward, let me indulge in some nonsense for a moment. Let’s start with a video:

Here we have a puzzling short film of four men — the singing group The King’s Men, led by Academy Award-winning composer Ken Darby — in a boarding house, repeatedly singing what sounds to be a random assemblage of consonants and vowels. The continue like this obsessively, until their enraged housemates ship them off to a rubber room, where, encased in straightjackets, they continue singing.

I feel a bit bad for bringing this song back into the public consciousness, as I suspect America spent a decade or more earnestly trying to get it out of their head. The song is called “The Hut Song,” and, if you’re trying to figure out what they’re saying, it’s “Hut-Sut Rawlson on the rillerah add a little brawla, brawla too it.”

No, it doesn’t mean anything. Back in the 1940s, America seemed to be crazy for nonsense songs. There was, for example, “Mairzy Doats,” which actually makes sense if you think about it too hard, which I can’t recommend. The most popular version of “Mairzy Doats” was recorded by the Merry Macs, a Minneapolis-based dance band that featured a fellow named Ted McMichael. So we can blame Minneapolis for informing us that “a kiddley divey too.”

As it happens, we can also blame Minneapolis for “The Hut Song” — Ted McMichael was one of its authors. Worse still, the lyrics were penned by Leo Killion, another Minneapolitan, and the lyrics are meant to parody the Swedish folks songs he heard growing up. There’s another author, Jack Owens, but he’s best known for penning Hawaiian songs, such as “The Hukilau Song,” Jack Owens was not from Minneapolis. It’s a pity we can’t claim him, as he was quite a character. His professional nickname was “The Cruising Crooner,” the result of his habit of going into the audience and singing directly at female audience members, sometimes sitting in their laps while they gestured that they were about to die of mortification.

The three of them created a song that genuinely seems to have the capacity to drive a listener to the madhouse — you’ve probably got it stuck in your head right now, and there it will stay, especially if you listen to this chipper version by Elsie Carlisle, or the original tight-harmony swing version by Minnesota’s own Merry Macs.