Let me tell you a story about Yves Klein, the French artist who is the subject of a current retrospective at the Walker Art Center called “With the Void, Full Powers.” Properly, it isn’t a story about Klein, but instead about a particular piece by Klein that is part of The Walker’s permanent collection called “Suaire de Mondo Cane.” And, more than that, it’s a story about a locally made web series, and the role I played in it, and how I came to destroy Klein’s painting.

The web series was called “Chasing Windmills,” and was the two-year project of a Puerto Rican couple named Juan Antonio del Rosario and Cristina Cordova. They had wound up in Minneapolis by whatever regretful set of circumstances lead people from Puerto Rico to Minneapolis, and they had decided to embark on an experiment here: filming a short movie and posting it online, every single day.

They did this for some number of months in 2006, filming in their own apartment in downtown Minneapolis and in various locations around town, telling a story they called “Chasing Windmills” and calling themselves Q and D, presumably for Don Quixote and Dulcinea, although their web series wasn’t so much inspired by Miguel de Cervantes as it was merely quixotic in conception. The first season focused on the troubled romantic relationship between the two main characters, not so much by using an ongoing narrative as by representing short, often comic, vignettes. They pointed to daily cartoons as their model, although their subject matter was often tougher than you might find in, say, Garfield. The first season ended with a rather harrowing miscarriage, as an example.

For their second season, the pair decided to expand their ambitions considerably, adding a large cast of additional characters who would all, more or less, have their own storylines. They drew from the local blogging community for actors, and, as a result, I was cast as del Rosario’s roommate, a character named Sam who, at first, wasn’t so much a character but an assemblage of quirks — some drawn, to be fair, from my own quirks. Some were not. Del Rosario thought it would be funny if Sam had a digestive problem that caused him to void his bowels painfully, but also a fear of enclosed spaces that forced him to leave the bathroom door open for the entire agonizing session. I did not find this funny, but it was their show, so I spent far too many episodes on a toilet seat, yelping in pain. It could have been worse, I suppose: They asked Alexis McKinnis, who writes the “Alexis on the Sexes” column for Vita.mn, to perform a love scene entirely in Klingon.

I believe they had an idea about what this season might look like when they started, but they had a loose, improvisational approach that caused the whole narrative to go pear-shaped. Midway through the season, they seemed lost, but in an interesting way. In one episode, cast members visited a pre-“Juno” Diablo Cody to get lessons on pole dancing. In another episode, Mpls. St. Paul Magazine writer Steve Marsh tracked down a local hacking legend named Joybubbles, who had been blind most of his life and had discovered he could whistle certain frequencies that would net him free phone calls, back when hacking took the form of something called phone phreaking, which was all about getting free phone calls.

Joybubbles eventually inspired the character Whistler from the 1992 film “Sneakers,” and was in Minnesota for whatever reason blind people from Virginia end up in Minnesota. Del Rosario and Cordova could be unexpectedly squirrely sometimes, and so, although they contacted Joybubbles to appear in the film, and he agreed, they eventually panicked and cast an actor in his stead. A few months later, Joybubbles died, and the episode of “Chasing Windmills” about him was featured on the New York Times website; it’s rather a pity the man himself could not have been in it.

The filmmakers’ improvisational sensibilities, and the fact that they were increasingly getting lost in their narrative, worked out well for me. They quickly let me drop the dialogue they had written for me and just improvise my way through scenes — Juan Antonio was a good improviser, and we would, essentially, goof off for an hour or so per week, which would then be edited into an episode or two. And they started asking me for input as to what might happen with my character, and this is where Yves Klein comes in.

Yves Klein was featured in a 1962 film called “Mondo Cane,” a documentary, of sorts, by two Italian filmmakers who deliberately sought out freakishness internationally. It did rather well, inspiring a rash of similar documentaries, all with the word “mondo” attached, but it didn’t do much for Klein. He was an artist of no small reputation, perhaps most famous for monochrome paintings, most of them done in a super-saturated blue that Klein trademarked, called it Yves Klein Blue. Klein had started experimenting with the human form, but rather than paint nudes, he would apply Yves Klein Blue to naked models, who would then press their bodies up against a canvas. As Klein was a bit of a showman — his work was an early precursor to performance art — he would sometimes make the creations of these pieces into events.

The “Mondo Cane” film crew was on hand for one of these, which was, when Klein did it, a rather solemn undertaking. He dressed in a tuxedo and hired a small string section to play an original composition, which, in keeping with his minimalist tastes, was just one note, played repeatedly. Klein painted the models as an audience watched, and, with great care, directed them to where they should stand and how they should impress themselves on the canvas. The resulting piece is lovely — it has a ghostly, fragile quality to it, and the Walker has it as part of its permanent collection.

The “Mondo Cane” filmmakers, however, used editing to give the event a very different tone from what Klein had created. They overdubbed the strings so that they played “More,” the film’s theme song. And they cut repeatedly to images of audience members and violin players, who seemed to be leering at the models. They took special care to focus on the pulchritude of the models, as though the event was about convincing young women to take their clothes off. Klein died of a series of heart attacks after the film was released, perhaps triggered by the film, which he reportedly found humiliating. He was 34 when he died. 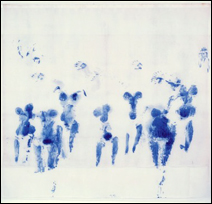 Something about all this made Klein’s “Suaire de Mondo Cane” an irresistibly fascinating piece to me, and also to my girlfriend. There was the fact that we could see it being made — the scene from “Mondo Cane” is easy to find on YouTube. But there was also the tragedy associated with it, which always makes something more appealing. We would stare at it at the Walker, and, when my girlfriend was bored, she would casually declare, “Let’s go steal the Yves Klein.” The painting is one of the centerpieces of the current Yves Klein exhibition, and my girlfriend still stares at it greedily.

So, when Juan Antonio del Rosario and Cristina Cordova came to me for my input as to what should happen with my character, I suggested just that: that I steal the “Suaire de Mondo Cane.” Over the few months that it took to establish the reason for this in the series, a convoluted, occult tale inspired by a voodoo saint named Baron Samedi, the narrative shifted so that I wasn’t stealing the painting, but destroying it. Although, in fact, the plan was that I would simply paint over the whole thing with Yves Klein blue, which, in my opinion, isn’t so much destroying it as simply creating another Yves Klein painting. We roped my girlfriend into appearing as a collaborator, and we made extensive, fictional plans to break into the Walker. The two filmmakers, who, as I mentioned, were sometimes squirrely, either never contacted the Walker for permission to film there, or were turned down. We filmed there anyway.

There was to be a scene in which del Rosario’s character confronts mine in a bathroom just before the crime was to be committed, and, for whatever reason, we sneaked into the Walker to film it in its actual bathroom. We started in the bathroom near the gift shop, attempting to shoot when it was empty and then pretending to wash up when it was occupied. This proved impossible. It was always occupied. That bathroom, it turns out, is the most frequently used bathroom in Minnesota. At one point, del Rosario handed me his camera and told me to film him entering the bathroom. He then exited and I pointed the camera at the door. A moment later, the door opened, and a different man entered, only to discover me pointing a camera at him. This seems like the sort of thing that would be hard to explain, but I guess if you’re going to film somebody in a restroom and have them think nothing of it, the Walker is the place where that’s going to happen. Nobody complained, or even seemed surprised. Eventually I remembered there were other bathrooms in the building and we made our way to one, where we were able to film uninterrupted.

The episode ends in a panic, with us spattered with Yves Klein blue, fleeing the Walker after an alarm is triggered, “Suaire de Mondo Cane” destroyed. And that was also to be the end of “Chasing Windmills” — the ambitious project had taken its toll on del Rosario and Cordova, and they decided not to return with a third season, although they later made a feature-length movie called “The System” that I understand will be released eventually. It’s personalized Yves Klien for me in a personal way that I can’t quite shake. Attending the “With the Void” show last month, I saw the “Mondo Cane” shroud, and thought, “I destroyed you once.”

I also still get nervous in the Walker’s bathrooms.

How I destroyed a painting by Yves Klein