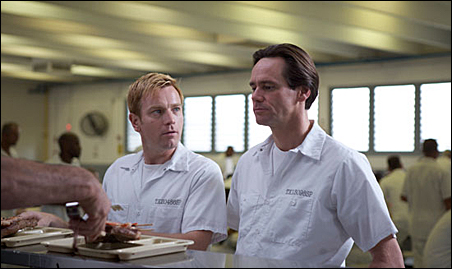 Roadside Attractions
Ewan McGregor and Jim Carrey in a scene from “I Love You Phillip Morris.”

The wheel of justice turns slowly, but turn it does, as demonstrated by yesterday’s repeal of Don’t Ask, Don’t Tell, a mere 41 years after the Stonewall Riots. It was a hard path to this particular victory, but eventually those who were filibustering relented, taking a bold stance that reflected the will of a mere 70 percent of the American population, and consistent with the recommendations of the military’s top brass, as well as a report from the Pentagon. How could we move toward justice were it not for the political courage of our representatives, making such a courageous decision in the face of so little opposition?

There was a time when only Al Pacino would play a gay man in the movies, which he did with great sensitivity in “Dog Day Afternoon” and with a great deal of leather in “Cruising.” Now we have big stars, albeit ones in decline, taking such roles, such as Jim Carrey, who stars in “I Love You Phillip Morris,” in which he plays a con artist who happens to have an incurable crush on Ewan McGregor. It’s a terrific film, and it was rushed to the screens, appearing a mere two years after it debuted at Sundance and after having been re-edited to tone down its gay sex scenes. Ah, progress.

The story is a true one, and astonishing. Carrey’s character, Steven Jay Russell, was a former police officer with a genius for gaming the system — he escalates from insurance fraud to sophisticated embezzlement schemes with only a few stopovers in prison between, which he treats with a smirking insouciance. The details of the film are scarcely exaggerated, and it’s a good vehicle for Carrey. He’s tended to alternate between very slight films in which he can clown quite a bit and heartfelt independent films in which he clowns not at all, and this combines the two. He’s enormously funny here, physicalizing his character’s experiences to great effect. His character bounces wildly between a sort-of devil-may-care overconfidence and a series of total meltdowns, with the latter inevitably exploding into astonishing chaos.

If I have a complaint about the film, it’s that while Phillip Morris is played very sweetly by McGregor, he’s barely a character at all. A former rent boy and ongoing kept man, he fulfils the function female performers used to be saddled with in this sort of film: fretting about their man in feeling the stings of their betrayal, but having no life or interests of their own. I don’t know that it’s an example of equity that men now have the opportunity to play such limited roles.

What undoubtedly kept this film out of theaters for two years is that it is completely unsqueamish about the subject of gay sex, and manages to use it, at the start of a film, to shock the audience, when we first discover Carrey In flagrante delicto. But this is never held up for ridicule — Carrey’s character just happens to be gay and enjoy sex, and the film refuses to be discreet about the fact. This itself is sort of a victory, albeit one that apparently terrified distributors, who, I think, have forgotten just how terrifying films can be.

If you’re up for a reminder, there’s a film playing at the Trylon Microcinema tonight called “Forbidden Zone,” and it’s a doozy — independently made in 1982 by Richard Elfman, brother of composer Danny Elfman, and the band Oingo Boingo, which they were both in. The film was intended to be a showcase for the band’s music and elaborate stage act, which was then something very close to performance art, and Elfman creates something that feels very much like an underground comic brought to life. The sets are almost entirely enormous illustrations, in the style of “The Cabinet of Dr. Caligari,” and most of the film is set in a lunatic underworld ruled by Hervé Villechaize and Susan Tyrell. 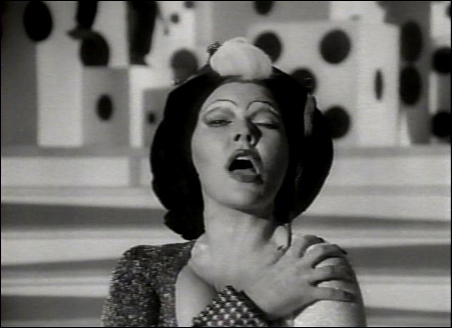 Courtesy of the Samuel Goldwyn Company
Susan Tyrell in a scene from “Forbidden Zone.”

Tyrell is, in my opinion, an actress who never got her due. She got an early Academy Award nomination for her performance as a shrieking alcoholic in John Huston’s film “Fat City,” but this is almost entirely forgotten, as the film, about low-level boxers in Los Angeles, is almost too depressing to endure. She then went on to be an impressively manic character actor, bouncing between exploitation films that felt like art films and art films that felt like exploitation. She got very ill quite a few years ago, losing her legs to a blood illness, and I tracked her down online and exchanged emails with her for a number of weeks. Unlike the raging lunatic she often plays onscreen, in life she was unfailingly civil and seemed pleased to have somebody to email with. It was, I must confess, a bit of a disappointment — like meeting a gang of piranhas and discovering them to be delightful hosts who mostly want to discuss the poetry of Housman.

Onscreen, however, Tyrell was the piranha I hoped for, and her performances are often marked by eccentric acting choices. For some reason, in “Forbidden Zone,” she chose to play her queen of the underworld in this film with one breast exposed, which would be a bit distracting were this not a place in which hundreds of terrified, topless women flee from room to room. I would try to describe the plot, but it is well beyond my descriptive skills. Be warned that it toys with racist imagery, and scatology, and makes it all sort of look like a Fleischer Bothers cartoon.

I’ve just realized that I have a Jim Carrey story as well, and I’d like to share it, even though it is neither here not there. When I was much younger, I worked as an usher at a movie theater in Westwood. One afternoon, Carrey came in to see a movie with his daughter. I took their tickets and pointed out where they could see the movie, and they thanked me and walked away.

Ten feet later, Carrey stopped and turned, a look of recognition on his face. “Oh,” he said. “Hi!”

He did not find me after the movie. I imagine at some point, after finding his seat, he realized I was not whoever he thought I was. I wonder who that might have been?

The outrageous onscreen: ‘I Love You Phillip Morris’ and ‘The Forbidden Zone’