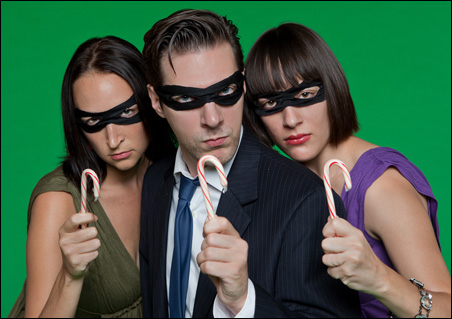 You might have noticed that there is some sort of holiday season going on at this moment. Especially if you’re a patron of the legitimate theater, the fact is rather hard to avoid — our local stages are positively festooned with Christmas-themed shows, which is enjoyable in small doses and oppressive in larger quantities. Just like Christmas songs, or sleeping pills, or Jim Carrey films.

Fortunately, we Twin Citians always seem to be offered a dose of irony, or cynicism, or whatever else we need to make our hearts grow three sizes smaller when it all gets a bit much. Ballet of the Dolls, as an example, has spent decades — decades! — creating popular tweaks on Christmas classics, such as its current show, “Cinderfella,” inspired by a Jerry Lewis film. Frank Theatre is offering up a stage adaptation of David Sedaris’ sardonic autobiography of working as a Christmas elf at Macy’s, “Santaland Diaries.”

And the producing team of Joseph and Sara Stevenson Scrimshaw, whose company is called Joking Envelope, are mounting a new holiday play by Bill Corbett. These names may already be familiar to you. The Scrimshaws, Joseph in particular, might be best known for a series of plays they have brought to the Fringe Festival; so much so that Joseph likes to joke that there isn’t a review of his work that doesn’t include the phrase “Fringe mainstay.” So we shall not mention the fact, nor make any use of that phrase. Bill Corbett, in the meanwhile, is probably best known as a castmember and writer on Mystery Science Theatre 3000 and the related (and more recent) project called Rifftrax. He’s also a Yale-trained playwright; the last play I saw by him, titled “Heckler,” detailed an Ignatius Reilly-styled character whose passion for interrupting public speeches leads to chaos. The production starred Brian Baumgartner, who is now best known as Kevin from “The Office,” and was very, very good.

I should take a moment for full-disclosure here, which will be a common feature of Max About Town, as I have a habit of enlisting local actors and other performers into my own projects. And so I have made a short film with Joseph Scrimshaw, have worked with at least one of his castmembers on one of my own plays, and asked Bill Corbett to be a guest judge for a limerick contest I did this past summer. I may also have skinny dipped with Bill years ago. It was late and my memory is hazy.

With that out of the way, Corbett’s script, titled “Super-Powered Revenge Christmas #1,” offers up a variety of Christmas tales all thrown together in a sort of revisionist blender, thanks to a flailing comic book writer, played by Scrimshaw. Desperate to recapture a lost sense of edginess, he has revisited Santa, Frosty the Snowman, Rudolf, and George Bailey as a team of misfit superheroes. The story, told by Scrimshaw to several barflies and one supercilious bartender on Christmas eve, is a terrible one, but it is knowingly terrible — Corbett has great fun with goosing both Christmas and comic book conventions, with even the comic characters themselves knowing what is expected of them, and struggling with it. (The Frosty character, played by Emily Gunyou Halaas, trips repeatedly over shouting superheroic phrases; the George Bailey character, played by John Middleton, is openly embarrassed about his superhero nickname, which, as I recall it, is UberBrain.)

This is the sort of show that’s mostly going to appeal to specific tastes, as it sends up comic book culture rather precisely; far more precisely, indeed, than it sends up Christmas traditions, which exist in this play primarily to be undermined by the comic book author’s flawed storytelling. And maybe it’s time comic book fans had their very own Christmas show. In the future, there will probably be a Christmas show to suit every single social group. I look forward to the stage production of “It’s a Very Valley of the Dolls Christmas.”

At the moment, the closest thing we have to Jacqueline Susann’s despised and adored novel about aspiring starlets destroying themselves in Hollywood is a film called “Burlesque.” There should be something deliriously trashy about this film — it is, after all, about a girl from Iowa who rises to the top of a burlesque revival house in Hollywood, only to find her attentions torn between a kohl-eyed bartender and a millionaire industrialist.

There’s a lot of camp in this film, and, in the best manner of camp, it’s almost all unintentional. But it has the form of great trash without the content of it — the Iowa girl, played by Christina Aguilera, doesn’t go down the sodden road that Patty Duke staked out, made up of pills and alcohol and bad love affairs. No, she mostly just trades up to designer shoes and hobnobs with record producers, which I presume is what Aguilera actually does and makes me wonder if she was even aware she was in a film. She’s given a gloriously catty antagonist, played by Kristen Bell, but, then, Bell doesn’t actually do anything to get in the way of the plot, which is usually the function of an antagonist. No, she just stands in the background, making the sort of snide remarks that people make when they want to be mean but haven’t had enough time to think about it. “I don’t see what the big deal is about her,” she complains about Aguilera at one point. Ouch.

But at least it’s set in a burlesque, so what the film lacks in tragic character arc it must make up in pulchritude, yes? Well, no. This is not the sort of burlesque of Minneapolis native Lili St. Cyr. This comes much closer to a group of “Dance Fever” terpsichoreans performing a revue of Bob Fosse numbers from “Cabaret.” And, in case you missed the reference, the film actually cast “Cabaret” actor Alan Cumming as the doorman. But, hey, “Cabaret”! That’s nothing but bisexuality and Nazis! And this is a movie that features Cher, so the gay subtext is not even subtext.

But it’s less than you’d expect. This is a chaste and strangely earnest film, and it could have been more. At least one draft of the film passed in front of Diablo Cody, who sought to make it funny, which would have been nice — but for some tossed-off asides from Stanley Tucci, this film scrimps on comedy as much as it does nudity. Little or no of Cody’s contributions made it into the final version. And, frankly, her version may have been misconceived as well. There’s nothing wrong with being funny when you’re making trash — Jackie Collins excelled at that — but above all, one must be decadent. This is a Hollywood in which strippers leave their clothes on and singers never go anywhere near drugs, and that’s not Hollywood. Heck, that isn’t even Iowa.