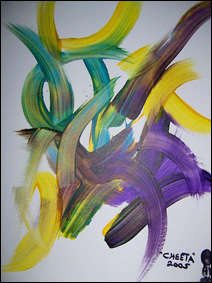 From the collection of Max Sparber
Untitled abstract by Cheeta

It is not often that art makes it off the arts page and into the news section — usually only when there is a controversy. And so it is that the official portrait of former Gov. Tim Pawlenty got some traction over the past month. There was, first of all, the cost of the thing: $25,200, which seems like quite a lot when we are facing a multibillion-dollar budget crisis. For some perspective, I own an original abstract painting done on commission by a Hollywood movie star. That star is Cheeta, the chimpanzee that appeared in the Tarzan movies, and now spends his dotage in a primate preserve in California, painting. His painting only cost me $150 or thereabouts, and the Bulgarian artist selected to paint Pawlenty is neither a movie star nor an ape.

Another issue is that Pawlenty has reportedly already had an official painting done. This was not mentioned by the news, and has been successfully hushed up, but I have it on good authority that at the start of his first term as governor, Pawlenty was painted by an English artist named Basil Hallward. The artist disappeared some years later under mysterious conditions, and the painting was likewise moved to an unused room in the governor’s mansion, where it was hidden under a sheet, and then the door to the room was locked and bolted. There are some who have seen it since, however, and have told me the story under the strictest conditions that I not reveal their names. They tell an occult tale of a painting that changes every year. One year it gained a mullet. Another year his posture had changed, with him giving thumbs-up gestures to a bill that read “cap and trade” — publicly he no longer supported this. Another year had Pawlenty staring at a map of Massachusetts while a newspaper on the desk behind him trumpeted that he was working toward universal health care. Most recently, the painting is said to show him happily opening envelopes filled with federal funds — in the real world, he has spoken out against them.

Those who have seen the painting claim that you would not even recognize Tim Pawlenty in it. And then they cover their eyes and weep — in terror, I presume. Anyway, they’re weeping for some reason. 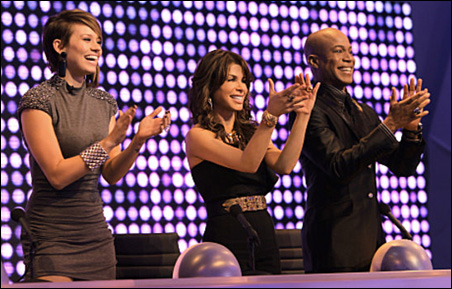 CBS
Paula Abdul and other “Live to Dance” judges

But it’s always nice when the arts move into the public sphere in some way. For instance, last night I watched the debut episode of “Live to Dance,” a reality show on CBS that is not only obviously inspired by “American Idol,” but also features Idol-alum Paula Abdul. In the show, young hopefuls wiggle about onstage as three judges watch and then flip colored lights to let them know if they will move on in the contest or not. I suspect one day, everything will be done like this. When applying for a job, you will have 30 seconds to make a presentation, and then a panel of professionals will flash lights at you. One of them will holler, “You have one chance, one dance!” as a film crew rushes over to console or congratulate you.

The dancing was, for the most part, unspectacular. I can say this with some authority, as I was a dancer for many years, starting as a breakdancer in high school and then taking folk dance in college, and eventually becoming a ballroom dance instructor in my early 20s. I know you may be suspicious of these claims, as I have just lied to you about Tim Pawlenty, but I assure you this is the truth.

Many of the dancers on the show were break dancers, and many were quite young. There was one group from Chicago that included a tiny girl, so young and so small that you expected the rest of the troupe to just scoop her up at the end and tuck her in their pocket. There’s something extraordinarily heartening about the fact that adolescents will gather in small groups in gyms or garages and spendhours teaching themselves gymnastic dance moves. There are worse things they could be doing with their time, such as drugs, or crime, or video games, or writing reviews of dance programs on television. But in some way their youth worked against them — while they were blessed with agility and stamina, there wasn’t much creativity. I was doing a lot of the same moves two and a half decades ago, and know that break dancing has, in fact, advanced quite a bit since them. After all, I still go to break-dancing movies, which typically feature inane plots but exceptional choreography, as was the case with “Breakin’,” all the way back in 1984.

Still, the show has its pleasures, not the least of which is watching the producers bait Paula Abdul with performers who tug her heartstrings, so she will attempt to vote them through when the other judges reject them. There were more than a few dancers in the twilight of their years, and I hope to be dancing as much and as well when I am their age — hell, I hope to be doing anything at all — but they seemed on hand more as crowd pleasers than actual contenders. But Abdul cannot be cruel, even with flashing lights, and so gave them an encouraging little vote of confidence, even as the others rejected them.

There is, it is rumored, a painting of Paula Abdul in a room somewhere, and she looks exactly like Simon Cowell. 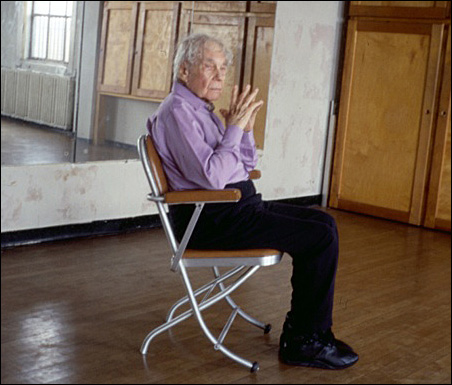 Courtesy of the Walker Art Center
Merce Cunningham at the Walker

While we’re on the subject of dance, I will point you to six short films currently playing at the Walker Art Center as an installation in their Burnet Gallery. It’s an interesting counterpoint to my complaint about the lack of imagination in the routines of the “Live to Dance” dancers. For one thing, it is choreographed to John Cage’s 4’33” — a composition that calls for four minutes and 33 seconds of no music at all, the only sound consisting of whatever ambient noises spontaneously occur during that time. Secondly, it isn’t really choreographed, but invented on the spot by Merce Cunningham, who died last year after a half century of being at the forefront of the avant garde of movement. Finally, Cunningham was 88 years old when the piece was filmed, and wheelchair-bound. The piece is called “Merce Cunningham performs STILLNESS (in three movements) to John Cage’s composition 4’33” with Trevor Carlson, New York City, 28 April 2007 (six performances; six films),” which sort of sums it up.

It is tempting to wonder what the “Live to Dance” judges would have thought of this. But, then, as Cunningham was 88, we already know that Paula Abdul would have applauded him.