I am a fan of camp, but, even though I am about to discuss a female impersonator, I’m not sure it is camp I will be discussing. Part of the traditional pleasure of female impersonation is the knowledge that it is exactly that — an impersonation. But with performer David Hanbury and his creation Mrs. Smith, there’s a very different sense. It’s a bit like when Linda Hunt was cast as foreign correspondent Billy Kwan in “The Year of Living Dangerously.” She wasn’t cast for the ironic pleasure we might take in seeing a woman cast as a man. She was cast because she was the very best performer for the role, gender be damned.

Not that there aren’t certain campy qualities about Mrs. Smith. There’s a great deal of outrageousness, as an example — it would be hard to think of a more outrageous character currently appearing onstage in the Twin Cities. Mrs. Smith is a doddering elderly woman with a very proper, blue-blood, Boston Brahmin quality about her, but she’s also utterly mad. She has recently lost her cat, Carlyle, and it’s not clear if it was that loss that tipped Mrs. Smith over the edge or if she’s long been insane, but she now lives life in a perpetual panicked fit. 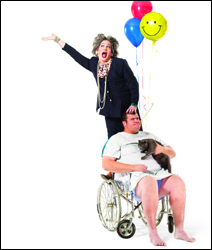 Mrs. Smith is not a satire of femininity, which is often the case, sometimes quite cruelly, with female impersonation. She could be played by a woman. As it happens, Hanbury, who created the character, plays her, and he does so without ever offering the knowing distance that one associates with camp. The character’s pleasure doesn’t derive from the ridiculousness of a man playing at being a woman. The pleasure comes from the character herself. Hanbury is not unique in this — the perpetually popular Miss Richfield is very much a character as well, and, in her own way, is also quite bonkers. But Hanbury takes it to a level that is genuinely breathtaking.

I have seen him perform once in the role. It was a few months ago as part of a variety show I organized at the Bryant-Lake Bowl. I had met Hanbury a few weeks earlier and had enjoyed talking with him, and watched a few of his videos online, and found them to be perfectly entertaining. So I asked if he’d be interested in performing. But the online videos did nothing to prepare me for the force of Mrs. Smith as a live character — which is, at times, terrifying.

He was preparing for his own show, a Halloween program, and so did not appear at the theater until the performance had already begun. I was onstage, doing what I sometimes do, which is play especially filthy Irish-themed music with a band called The Peter O’Tooles. And suddenly, out of the blackness, among the audience, Hanbury appeared as Mrs. Smith. She crept forward into the light, hesitantly, wandering up to the stage. She seized my microphone with a frail hand, her back to the audience, and, calling me Peter, preceded to offer up babbling, terrified warnings of … something. There was some awful thing out there in the theater, and we should know about it, and the audience should be warned. She then wandered away. Later in the show, she wandered up again and made the same dire warnings.

Finally, it was her turn to take the stage. Now, Hanbury is a conservatory-trained performer, and that training brings with it an astonishing amount of stamina; he needs it to maintain Mrs. Smith’s perpetual fretting, which often launches into extraordinary volume. It did this night. She offered up a genuinely surreal monologue about a kidnapping she experienced, and then seized an electric guitar and, over her own hard rock instrumental playing, keened like a professional headbanger, wailing and moaning and, at one point, flinging open the doors to the Bryant-Lake Bowl’s theater, crying out her song of madness to startled passers-by. She left the audience rapturous, astonished, pounding out an ovation, and she disappeared into the dark. By the time I finished the show, Hanbury was gone. The next night he opened his Halloween show, which sold out, and I understand he sold out every performance.

Tonight, and through Saturday, he takes over the Southern Theater as part of the Brouhaha Comedy Festival, hosting what he describes as a benefit for a fictional organization called The Carlyle Foundation Empowerment School for People and Cats with Severe and Persistent Challenges. I wouldn’t be surprised if he sells out the Southern too. 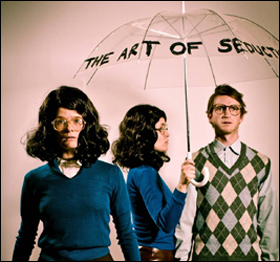 I’d also very briefly like to suggest another piece in the festival, called “The Art of Seduction,” which I know very little about, but for the fact that I know about the performers involved and think they are wonderful. The piece was created by the Richardson Sisters, Kimberly and Sara, and they’re not actually sisters — they just coincidentally share the same name. They did a piece at the Fringe Festival a few years ago called “The Nosdrahcir Sisters,” in which they played two siblings trapped in a sort of perpetual childhood. They retained their childlike imagination — something as simple as a trip to the supermarket became an essay in ingenious physical comedy — but they also retained their childlike temperament, with all the hurt feelings this entails. Their current piece is about a woman whose self-image as an awkward wallflower gets a sudden reevaluation when she discovers herself to be an object of desire. It’s precisely the sort of story I imagine the Richardsons doing well. They have a genuine talent for combining sweetness with awkwardness, which is saying something.

In the meanwhile, The Walker Art Center continues its “Out There” series with an Antwerp-based performance troupe called Berlin, performing a piece called “Bonanza — A Documentary for Five Screens.” The show actually is a documentary, of sorts: The troupe visited the town of Bonanza in Colorado, a town with only seven full-time residents. The troupe filmed the people of Bonanza, who manage to both be charmingly eccentric and on the verge of murdering each other. They project this documentary on five different screens, creating something like David Hockney’s experiments with photography, where, instead of taking one picture, he would take hundreds, so you were never seeing the image from one vantage point, but from many.

Adding to this, the troupe has built a to-scale replica of the town, which they hang above the screens. It’s a finely detailed model, with working lights, and they treat it sort of like a set, casting spotlights on places where the action takes place. In some ways it’s the opposite of Hanbury’s piece; this one keeps the audience constantly removed from the story, constantly viewing it from additional perspectives and surprising angles. But, in its own way, it’s just as engrossing. One starts to wonder if it isn’t at all possible that the little doors on the model might open, and little versions of the onscreen characters might not come out and play act the true story being told.

Camp, comedy, and documentary at the Southern and Walker