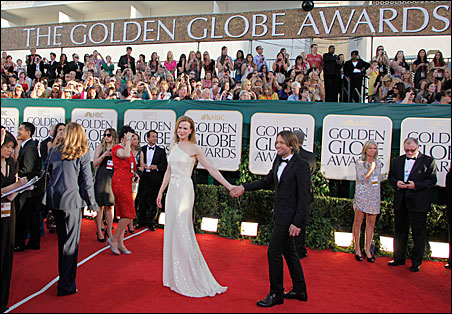 Last night was the most disreputable, and therefore most entertaining, of Hollywood awards ceremonies: The Golden Globes. Ever since 1981, when Pia Zadora won one she was ineligible for, the Golden Globes have been dogged with rumors that they are fixed, or open for bribes, or driven by advertising. I’d like to believe all three things are true; this is, after all, the award presented by the Hollywood Foreign Press Association (HFPA), which one wishes to think is a bit like the Casablanca police force that gambles at Rick’s Cafe Americain and then declares itself shocked — SHOCKED — to discover gambling on the premises.

Certainly the charges of bribery seem to have a little fire under the smoke, although inevitably that fire is a little embarrassing. Take the Pia Zadora incident: Her husband was Meshulam Riklis, a multimillionaire, and he flew the Hollywood Foreign Press to the Riviera Hotel in Las Vegas for a lavish junket. This scenario was repeated in 1992 for “Scent of a Woman,” with Universal Pictures flying Hollywood Foreign Press members out to Paris to hobnob with Al Pacino. This seems rather a pity, as “Scent of a Woman” was, in its way, a fairly decent film. If you’re going to bribe them, get them to throw a vote behind something really embarrassing, and make the bribe small and unimpressive. This year, Sony is reported to have flown HFPA members to Las Vegas for a free Cher concert, leading to the inclusion of “Burlesque” on the ballot — that’s more like it.

And who is the Hollywood Foreign Press Association, I hear you asking. Nobody you’ve ever heard of, and yet they wield an enormous power in Hollywood, as foreign returns on movies can make or break a picture. Only about a third of them are full-time film journalists. The rest tap out a film review every so often — certainly less frequently than I do, here in Minneapolis, covering the arts for what, to Hollywood, might as well be Tajikistan. As little-known, as little-producing as they may be, however, because they provide for a desirable international market, they’re often treated by the studios with a silver serving platter. They’re wined, dined, given tours of sets, and get to meet performers who usually don’t do junkets and don’t have much time for film journalists. 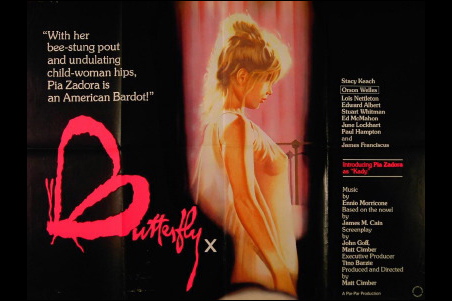 At this moment, I’d like to put it into the record that, if the HFPA wants to send any work my way, I’ll gladly play up the role, driving around Hollywood on a little Vespa while smoking Gitanes with one hand and sipping espresso with the other. And, like other members of the HFPA, I’m easy to please. You don’t need to fly me to France to meet Pacino; if you set me up at a miniature golf course with Jean Claude Van Damme, I’ll throw a vote his way. I love Van Damme.

Mildly embarrassing but necessary
As a result of this, the Golden Globes tend to be seen in Hollywood as a mildly embarrassing but necessary spectacle, which leads to nominated performers and film professionals famously getting pretty drunk and rowdy at the event, and often offering up awards speeches that seem to mock the event as much as thank it — Robert De Niro gave a classic example last night, which I will get to, but another recent example was Robert Downey, Jr., who refused to thank anybody and then declared the Hollywood Foreign Press  “a strange bunch.” The awards ceremony is treated as little more than a run-up to the Academy Awards, a preview of what Hollywood treats as a more important and significant ceremony, despite having failed to ever give an Oscar to Hitchcock or Welles or Altman or Demille or Kubrick.

The HFPA seems to be fighting back, in a way, with its selection of host — it has now had Ricky Gervais, the legendarily prickly English creator of “The Office,” and this year it seems to have encouraged him to go nuclear. His opening monologue, a fearless assault on Hollywood mediocrity, which also managed to mock the Golden Globes repeatedly, produced more shocked gasps than it did laughter. Referencing the poorly reviewed “The Tourist,” which was up for three Golden Globes, Gervais said “I’d like to quash the rumours that the only reason ‘The Tourist’ was nominated was so that the Hollywood Foreign Press can hang out with Johnny Depp and Angelina Jolie. That is rubbish, that is not the only reason. They also accepted bribes.”

Of course, Gervais was simply participating in a longstanding British tradition of puncturing self-importance, which is, in polite circles, called “taking the mickey” — there’s a more vulgar version for less polite circles. But this isn’t done in America, and not only has the press been flooded with “was Ricky too mean” stories today, but he was chastised from the stage of the Beverly Hills Hotel last night, at one point or another, by Tom Hanks, Tim Allen, Steve Carrell and Robert Downey Jr., who declared the hosting “hugely mean-spirited with mildly sinister undertones,” and then proceeded to sexually harass the evening’s female performers for five minutes. It is all right to mock the Foreign Press; it is not OK when they mock back.

Cruel inventories
In fact, the cruelest thing Gervais did was simply rattle off lesser-known films from performers’ résumés when introducing them. “These are porn films!” he declared when introducing Downey Jr., and with Bruce Willis, his inventory of the man’s career demonstrated just how much forgettable material the man has produced. Gervais then went on to affix a label to Willis that might haunt him for the rest of his career — he introduced him as Ashton Kutcher’s dad. When the camera cut to Willis, the usually cheery actor was glowering. But Gervais had his sites set higher than a few dozen Hollywood actors — he actually ended the show by mocking God. It’s doubtful Gervais will be back next year; it’s equally doubtful he cares.

But the sharpest speech of the evening came from Robert De Niro, who was being awarded a Cecil B. DeMille Award for his lifetime body of work, which, for the first 20 years, was as thrilling as it has since become unexceptional. De Niro peered at his teleprompter, saying the lines of his speech as though he had never seen them before and it was the first time he was reading them. But whoever wrote the speech for De Niro tossed some grenades in with the plaudits.

“The important thing is that we are all in this together,” he said. “The filmmakers who make the movies and the Hollywood Foreign Press Association members who, in turn, pose for pictures with the movie stars.” But De Niro wasn’t content to bite the hand of the organization that had just thrown laurels at his feet; he also took potshots at Hollywood. Describing a montage of his performances in films, De Niro said “These movies … are like my children. Except that my children are more expensive and you can’t remake them in 3-D to push up the grosses.”

For a complete list of Golden Globe nominees and winners, check out the Hollywood Foreign Writers Association’s website.