The Minnesota History Center has a program it’s been doing for about three years called The History of Hip. It’s an informal seminar series on various aspects of popular culture — I attended one a few years ago that traded on the success of “Mad Men” to discuss the Minnesota advertising scene in the ’60s. They brought in Lee Lynch, one of the founders of the Minnesota company Carmichael Lynch and one of the creators of a style of advertising dubbed “Minneapolis cute,” who confessed that, yes, back in the ’60s, the advertising world actually was a lot like it is shown on “Mad Men,” at least as far as the smoking and drinking were concerned.

Last night the program offered up a look at tattoos, featuring a local tattoo artist named Awen Briem, who is especially good with Celtic designs, and Dr. John Troyer, who, as it turns out, I have known for years, from before he was a doctor, when he was still a student at the University of Minnesota. Troyer used to do a number of theater projects in the Twin Cities that were generally ambitious and decidedly avant garde; as an example, he staged Heiner Müller’s postmodernist “Hamletmachine” as a six-hour epic. The whole text of Müller’s play can probably be read aloud in seven minutes without hurrying, so how did he do it? Simple: He repeated the performance over and over again. As I recall, he changed the order of scenes. As I recall further, he also set up a punch card machine like you would find at a factory, and people could punch out and leave the show and, if they wanted, return and punch back in. 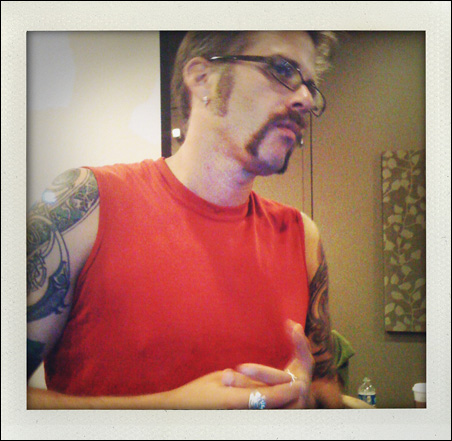 Troyer has settled in Bath, England — which was, in one of those odd but meaningless coincidences, my hometown for a while when I was a boy. And he has found work at the University of Bath, where my father worked, albeit as a professor of pharmacology. Troyer doesn’t do that; decidedly not. His specialty is death, and he works in something called the Centre for Death and Society. Troyer has a blog on the subject called the Death Reference Desk, which bills itself in the following way: “One professor of death. Two lively librarians. Blogging the deathly side of culture and society.”

So how does this all lead to the topic of tattooing? Well, in two ways. First, and simplest, Troyer has had his arms and back tattooed by Briem, in part after his grandfather suggested it might be a good idea if Troyer were ever to be in the sort of accident that renders him unidentifiable. Secondly, people often get tattoos to commemorate a loss, and this was a large part of the evening’s presentation. Troyer and Briem showed photos of tattoos that commemorate 9/11, and military losses, and deceased relatives and pets. In fact, Troyer’s blog has a tag for “memorial tattoos,” as it is a subject that has long interested him.

But commemorative ink wasn’t the evening’s only brush with mortality. Troyer showed dozens of slides taken from various collections of tattoos, and how are tattoos collected? They are cut from the bodies of the presumably dead, although Troyer allowed that there is a lot of uncertainty about who these tattoos came from and how they were acquired. Showing a pair of images of leathery, tattooed flesh that seemed to have come from the entirety of one man’s back, Troyer said “If he wasn’t dead when they started taking the tattoos, he was by the time they finished.”

I suppose you never quite know when things are going to turn ghoulish. This past Sunday, the Minnesota Opera offered a discussion of its forthcoming production of Gaetano Donizetti’s “Mary Stuart,” featuring the play’s two lead performers, Judith Howarth and Brenda Harris, as well as director Kevin Newbury. The play details the last days of Mary, Queens of Scots, and, as anybody who knows their history knows, that’s a story that ends with a beheading.

For the most part, the assembled steered clear of the ghastly details of Mary Stuart’s ending — the executioner fumbled and had to strike three blows to complete his work, and then lifted her head to show it, not realizing that she was wearing a wig. As a result, the deceased queen’s head tumbled to the ground, which is about as undignified a climax as one can have to her corporeal existence. They did, however, mention that Mary Stuart has secreted her dog in the folds of her dress and brought the poor thing with her to the chopping block, and, when the deed was done, the animal emerged, blood spattered and terrified, and would not allow anyone near the body.

Well, this is opera, and we were at Brit’s in the club house — a second-story party room that is mocked up to look something like the wood-paneled and leather-sofa’d rooms that one might imagine a Victorian cricket team clinking snifters of brandy in. Where better to hear macabre tales from British history? Better still, Judith Howarth, who plays Mary Stuart, used to live in Northamptonshire, where the queen was converted into a bipartite monarch, and used to take friends and family to the locations of Mary Stuart’s last few hours and tell them dreadful tales of internecine head removal, which is pretty much the ideal way to spend an afternoon with a bel canto singer. 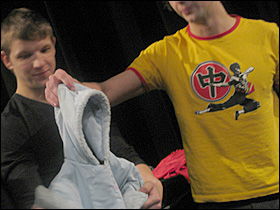 If I may continue to work my way backwards, chronologically speaking, I spent part of Saturday with three of the puppeteers from “Show Your Face!,” the European figure theater performance that the Walker Art Center offered last week. The Walker frequently offers seminars with its visiting performers, and I don’t think enough people take advantage of them, as when else are you going to spend two hours with Latvians who can turn a child’s snowsuit into a hunted man?

We took the stage of the Walker’s McGuire Theater, which was still set for the show, and seized the show’s props, which mostly consisted of various found objects, such as cameras and lamps and neckties and, for some reason, a plastic cactus. The puppeteers extolled us to play with the things, to get them breathing and moving, to assemble them into little monsters or animals or humans. Eventually, we all got to handle the snowsuit from the show, which is functionally the star of the play and it was probably a bit of a risk to have him manhandled by strangers. But there I was, manipulating his arms while two others worked his head and feet. We made him do push-ups and then made him fly for a little while. This is a unique experience in local performance. At the Guthrie, for example, there’s never an opportunity between shows to get alone in a room with the play’s star and seize their extremities to move about. I’ve asked, and they’re pretty firm that this is not to be done.