There have, as far as I can tell, been three plays written that relate to a short, nearly impossible-to-find film by Andy Warhol filmed in 1965 and starring Factor superstar Edie Sedgwick. (You can see a snippet of the film here — that’s Warhol himself who wanders into the set and snaps a photograph). The making of the film was famously a bit of a disaster, as Sedgwick refused to learn her dialogue, and so pages of the script were hidden around the tiny white kitchen; every time she didn’t know what to say, she sneezed, and somebody fed her a line.

The first play that came out of “Kitchen” was by Ronald Tavel, who cofounded the legendary Ridiculous Theatrical Company, and debuted in 1967. It was called “Kitchenette,” and it’s worth noting that Tavel was actually the original screenwriter for “Kitchen” and appeared in it, so his play was autobiography. The second play I will mention only in passing, as I wrote it. It was called “chelsea (from a to b and back again)”  and debuted at Omaha’s BlueBarn Theatre in 2003. The third, which can currently be seen as part of the Walker Art Center’s “Out There” series, is by a combined English and German troupe called Gob Squad, and is called “Kitchen (You Never Had It So Good).” Melpomene can be a perfidious muse.

Now, it can be a bit maddening to create a play and then have something similar show up that is quite a lot more successful. I’ve had it happen twice, once with a play that retold a historic lynching from the point of view of two itinerant blackface minstrels, which everybody will now mistake for “The Scottsboro Boys,” and once with a play about Truman Capote’s decline as a writer following the publishing of “In Cold Blood” that has been thoroughly trounced by two films with approximately the same theme, one of which won an Academy Award. But I won’t begrudge Gob Squad, as I am a fan of their work. I saw their last production, which the Walker brought to town a few years ago, and adored it. It was called “Super Night Shot,” and consisted of an improvised movie the cast made an hour or so before the play was scheduled to start, which was then mixed live onstage. My girlfriend was so excited by this show that she made a short video telling people to see it, which the cast then saw, which made her a bit of a celebrity. We went to interview Simon Will before the show Thursrday, and when he recognized her, he jabbed an excited finger at her, saying, “It’s you! It’s you!” 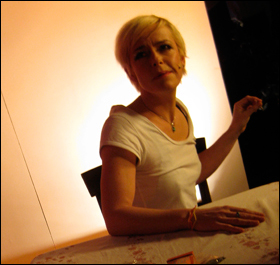 Photo by Coco Mault
Sharon Smith on the set of “Kitchen”

Like “Super Night Shot,” their version of “Kitchen” is mostly made up on the spot — there’s an essential structure to it, but the dialogue isn’t set, and specific events in the play can be radically different from night to night, especially as the play requires a few audience members to take the stage for extended interactions with the cast, each taking part in a sequence of Warhol’s other short films, including “Sleep,” which consisted of a man sleeping, and “Screen Test,” which consisted of an subject doing, well, not much of anything at all. According to Will, the germ of the idea of the play was a movie that eats its audience: The film would require a new audience member to enter it and take a role before it could continue, and eventually the entire audience would be consumed.

They ended up doing quite a lot of improvising in a kitchen, re-enacting scenes from films they had seen, and then re-enacting scenes from films they hadn’t seen, but had heard about, which they found more fun. Eventually, they hit on the idea of re-enacting “Kitchen” which almost nobody has seen, and this became the play. So it’s not Tavel’s original script for “Kitchen” onstage at The Walker. It is, instead, four actors trying to re-create it on the spot, based on the little they know about it, and based on what they know about the ’60s, and Warhol — and some of this they get wrong. They’ll discuss what should be in a scene, and sometimes bicker about it. Each will try to step in as a director, superimposing their ideas of what the film should be, and sometimes their directions will be met with a chorus of disapproval. It’s a messy, hilarious thing to watch, which, sonofagun, is true of Warhol’s “Kitchen” as well. 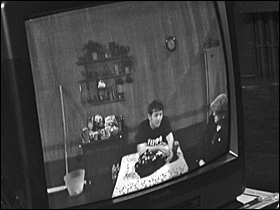 Photo by Coco Mault
Max interviews Simon Will in the kitchen

And we watch it as though it’s a movie — the cast is hidden behind a screen, performing in a cramped kitchen set, their action films projected onto the screen in black and white. And the results are quite different than a typical stage play, in which the cast must act to the audience, and is ever aware of their presence. This is acted like a film, full of small, nuanced moments, some entirely in silence, because the camera catches and magnifies them. And, hidden behind the screen as they are, the cast is aware of the audience but also separated from them. This may or may not  contribute to the performers’ willingness to express unfeigned intimacy, but the play is full of those moments — there’s a great deal of nakedness on display here, some of it figurative, some of it literal, once again captured and magnified by the camera.

I suspect the presence of the camera has an effect as well, and will have to ask the cast about this — they are offering a workshop on Saturday. I know that Warhol was irritated by how much his performers did during his screen tests. He wanted unfeigned moments of intimacy, but people, left alone with a camera facing them, will tend to do something — some burst into tears, some hammed it up, and some simply glared at the camera. To get around this, Warhol would sometimes secretly start the camera and then excuse himself to go to another room, and when he’d return, he’d thank the person and tell them they could go. The play deliberately, and cleverly, catches a few moments like this, of people unaware they are being filmed. Warhol knew what he was doing; it’s thrilling.

In the future, everyone will be in a Warhol film for 15 minutes: Gob Squad’s ‘Kitchen’