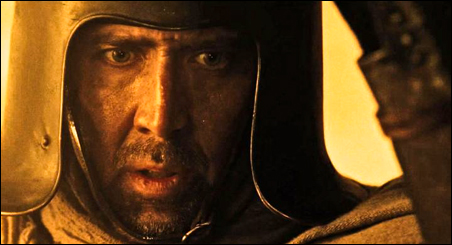 Courtesy of Relativity Media
Nicolas Cage in “Season of the Witch.”

This is, as far as I can tell, a good time for zombies and a bad time for witches. A while ago, this would have been reversed, with Nathaniel Hawthorne and Arthur Miller both tackling the subject of witches as metaphors for social ills, while zombies were, for the most part, relegated to a few poverty row thrillers set in Haiti. But zombies are, as Variety magazine might put it, boffo BO just now. Witches? They make an appearance yither and zon, or zither and yon, but I don’t think we really know what to do with them anymore. 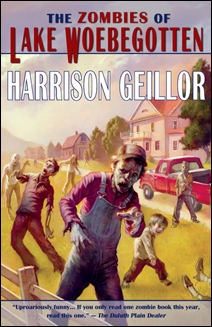 Case in point: I received a book a few weeks ago that takes Garrison Keillor’s subtly satiric Minnesota suburb and unleashes a horde of the undead upon it. The book is a one-off lampoon, titled “The Zombies of Lake Woebegotten” and credited to an anonymous author who goes by the nom-de-plume Harrison Geillor. The book is published by a company called Night Shade Books, which has its home in San Francisco, but whoever the pseudonymous author is, he is certainly a Minnesotan.

The book intermittently parodies the faux-folksy storytelling style of the “Prairie Home Companion,” opening with the words “Lake Woebegotten, Minnesota has changed a bit since the end of the world, of course, but in matters historical and geographical, and to some extent cultural, things are pretty much as they’ve always been.” It’s hard to read this text without hearing it in the honeyed tones of Garrison Keillor. But the book quickly drops this narrative voice in favor of a less mannered storytelling style. After all, a small town is overrun with the hungry dead, and so the book’s sentences turn quickly to brief, blunt descriptions of decapitations, shotgun injuries, and biting teeth.

It never loses its satiric edge, although the satire often bears the overripe quality of an E.C. comic, rather than a small-town homily. The residents of Lake Woebegotten range from dullards to psychopaths, and everybody has a secret, ranging from the perverse to the murderous — it’s sort of the opposite of Babbitt’s Zenith, in which everybody is agonizingly normal. Nonetheless, the city is unmistakably Minnesotan: Upon witnessing an old man mowing down walking cadavers, characters stop to note the make and model of the chainsaw he is using.

In the meanwhile, the latest incarnation of the metaphoric witch is apparently responsible for the bubonic plague that killed as much as 60 percent of the the population of Europe starting in 1348. At least, this is what the Nicolas Cage movie “Season of the Witch” would have us believe.

There is little to recommend the film, even for fans of Cage’s trashier work, such as the remake of the cult classic “The Wicker Man” that consisted mostly of Nicolas Cage running around a religious community punching women. Cage is strangely subdued here, which is disappointing, as his eccentric characterizations very nearly save some truly awful films. There’s “Ghost Rider,” as an example, which is an extraordinary rarity in that it’s a superhero movie where the superhero’s alter ego is the most interesting character. For some reason, Cage decided his character would come off as a dim-witted Elvis impersonator with dual obsessions with jelly beans and Karen Carpenter. When he turned into Ghost Rider, however, he was just some tedious computer animation.

But he doesn’t do much with his character here, a Crusader who deserted after a crisis of conscience. He is partnered with Ron Perlman, also a generally eccentric character actor (and someone who, as a result of my excess of civic pride, I insist on identifying as a University of Minnesota graduate). Perlman at least seems to be having some fun with his role. Neither attempt an English accent, but so what? Back in the Middle Ages, they would have been speaking Middle English, so their dialogue should properly have looked like this: “Syððan wæs geworden þæt he ferde þurh þa ceastre and þæt castel.” Additionally, this was before something called The Great Vowel Shift, and so their accent would have sounded like Liturgical Latin rather than a contemporary English accent. So if they speak with a Southern California and a Washington Heights accent, it’s no more wrong than what the film’s English actors are doing.

I might have gotten off on a tangent there. What was I talking about? Oh yes — witches. There is a witch in this, played by Claire Foy with suspicious, darting eyes, which is about all she can offer as she spend most of the movie in a cage. The movie wants to be a story about redemption, as Nicolas Cage suspects she may be innocent of the changes against her and takes command of her to make sure she gets a fair trial, which, in the Middle Ages, is a bit like taking charge of a mule to make sure it turns into a flying saucer. But the movie doesn’t really care about its metaphor, and, in the end, is mostly about knights battling the supernatural, which is just some tedious computer animation.

I will point out this, however, for scholars of the genre: “Season of the Witch” is a bit unusual in that it borrows the form of the classic Gothic novel, dating back to Horace Walpole’s “The Castle of Otranto,” published in 1764. Like the Walpole novel, it’s set in the Middle Ages and makes extensive use of crumbling ruins and a succession of nonsensical supernatural acts. And, again like the Walpole novel, it’s idiotic, although “Otranto” has a benefit that “Season of the Witch” is missing, in that it is utterly bonkers.

There’s a lot about “Season of the Witch” that is sort of a shame, not the least of which is that, like “My Own Private Idaho” and “Some Kind of Wonderful,” it takes its name from a terrific song (in this case by ’60s folk rocker Donovan), but neglects to actually play the song in the film. Lacking in typical Nic Cage lunacy, a strong metaphor, or a great soundtrack, I’m not sure what there is in the film that’s worth recommending.