I recall going to the Bell Museum of Natural History on the University of Minnesota campus with some frequency when I was a boy, generally as part of a class trip. I don’t recall much about it, but for the “touch and feel room” — an exhibit of pelts and pine cones and teeth and whatnot in boxes that children are allowed to hold, and which terrified me. From my perspective, it might as well have been called the “Is there a tarantula in that box? There is, isn’t there?” exhibit, and I can’t be the only child who was certain that whatever that room contained, I didn’t want to touch it. 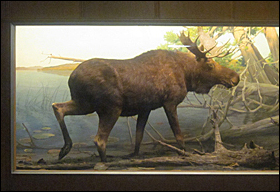 MinnPost photo by Max Sparber
The moose at the Bell Museum

I have a different relationship with the museum as an adult. Firstly, I’m no longer afraid to touch things, and, secondly, I have grown to like the distinctly old-fangled quality of the rest of the museum. Its current building is constructed with the clean lines of early to mid-20th-century deco, and offers a bijou but fascinating collection of dioramas of state animals, mostly constructed between 1920 and the late 1940s. These are exactly what you expect they might be: Animals preserved in taxidermic permanence, posed in scenes of nature created with wax flowers and painted backdrops.

There’s an exhibit on now that I was ostensibly there to see, called “Sustainable Shelter: Dwelling Within the Forces of Nature.” It isn’t the most exciting of exhibits, but, if this is a subject that interests you, the various displays will walk you through various panes of glass you might choose for your windows, and how our energy usage has expanded since the Victorian era, and how the natural world has evolved to make efficient use of energy and dispose of its waste. In the latter category, as an example, they have a terrarium, suspended from the ceiling, that you can stick your head into. I did. It’s precisely as I imagined it would be: hot and moist and scented with dirt.

The museum also has an example of an Icon solar house, which was created by College of Design students from the architecture, graphic design and interior design disciplines to make as much use of the sun as possible. It’s a neat-looking building, seeming like a combination Danish modernist structure and a steam bath. One can easily imagine drinking vodka in such a building, listening to the music of Thorvald Aagaard, and reading a thriller by Stieg Larsson. Hell, one of his books could be set here. We’ll call it “The Girl Who Kicked the Small Wooden House.” 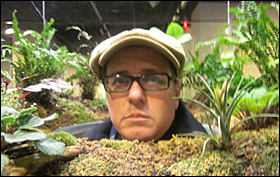 MinnPost photo by Max Sparber
Max sticks his head through an exhibit at the Bell Museum of Natural History.

Part of the reason for this exhibit, as far as I could tell, was to prepare patrons for a planned move: The museum hopes to build a newer, and greener, facility on the St. Paul campus, presumably so their dioramas can finally be enjoyed by the school’s many mortuary sciences students. But this set me wandering around the current Bell Museum, which I will miss. I feel I have not taken enough advantage of it, perhaps owing to a residual fear of spiders. As an example, I had not noticed before yesterday that some of the dioramas feature a little memorial plaque. Many are dedicated to Mr. James Ford Bell, the former president of General Mills and a longtime philanthropist, after whom the museum is named. These include the museum’s awesome moose and timber wolf dioramas, which are about as close as you safely want to get to these creatures.

Several, however, were dedicated to a man named George H. Christian and donated by the Citizens Aid Society in Minneapolis. I am embarrassed to admit that I had heard of neither, but, if they managed to produce a pine martin and fisher diorama, they must have been somebody. In fact, Christian was another wealthy industrialist with a milling background, and he was also quite the philanthropist. He introduced a new process for milling springwheat, and I can see you yawning already, but it allowed Christian to retire early and dedicate his life to helping his fellow man. How many do that nowadays, springwheat fortune or no? Approaching his death, he left a sizable charitable endowment for charitable work — by my rough calculation, it was the equivalent of more than $30 million dollars. The Citizens Aid Society was the result, and its good deeds included the Glen Lake Sanatorium, a treatment center for tuberculosis that provided assistance to about 8,000 people.

I also discovered that the museum once had the stuffed remains of General Custer’s dog. I went to the museum rather late, and so there wasn’t enough time for me to track down somebody who could tell me if this important historic artifact still resides within the building. If so, I want to see it. I’d even touch a tarantula to do so.

On a completely unrelated note, I also went to the relatively new country bar in St. Louis Park. While the bar is named for singer Toby Keith and is styled after the singer’s bar in Las Vegas (as well as having photographs of the singer all over the walls), it’s actually a franchise — from the sound of things, a successful one, and almost entirely owned by one man, Frank Capri. So while the bar is called “Toby Keith’s I Love This Bar and Grill,” it should perhaps instead be called “Frank Capri Loves ‘Toby Keith’s I Love This Bar and Grill’ Bar and Grill.”

It’s the sort of place that one might expect a city snob to turn his nose up at — it has tin sides and an enormous American flag-emblazoned stylized guitar above the bar. The bar offers live music — last night the band was a country cover group called Iron Horse — and patrons happily do-si-do and line dance. The food includes baskets of tater tots, and, as I mentioned, there are pictures of Toby Keith everywhere. You sort of expect the bar to fall silent when a city slicker like yours truly comes in, never mind that I was raised in St. Louis Park. 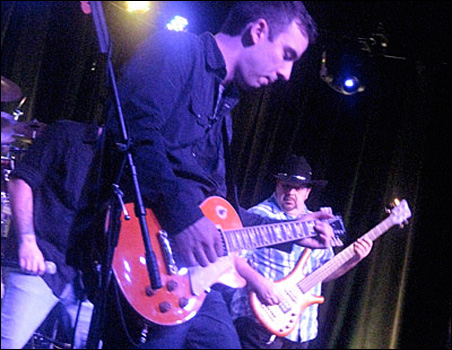 Well, they don’t, and I may be a snob, but I am a longtime country fan and played in a country band for a year. Heck, a year ago one of my plays featured a superb local actress, Adena Brumer, and she used to sing with Iron Horse. So my only concern in such a venue is the same concern I bring to Irish bars, or cocktail lounges, or an old-fashioned steakhouse: How good is the liquor selection, and how well do they pour a drink?

The bar initially seemed a bit suspect, as they offer drinks made with the sort of Tennessee whiskey and Mexican tequila folks sometimes choose as an affectation, thinking that a shot of Jack Daniels will make them seem tough. And then their drink menu offers some classics, but always with a countrified variation. For instance, I ordered a Manhattan, which is the sort of drink that ordinarily might get a man ridden out of town on a pole if ordered in the wrong bar. But they have it on their menu, redubbed the Gentleman’s Manhattan, and made with Gentleman Jack, with is a top shelf version of Jack Daniels that tends to be favored by people with yellow-tinted glasses, gold necklaces, and pinkie rings. A Manhattan is freqently made with rye whisky, but I tried their Gentleman’s version and it was … not bad. There was a bit too much sweet vermouth, but, then, most bartenders have the same sort of fear of vermouth I have of tarantulas, and so I will never fault a bartender for erring on the side of the fortified wine.

I sampled two more drinks. First, their version of the margarita, called a Who’s Your Daddy, which features a splash of orange juice. It was sweet, but fruit juice sweet, not the cloying sweetness that many modern bartenders mistake for good flavor. They also offer something that might be mistaken for a tropical cocktail, called a Cinn-Tini, made with spiced rum and three types of orange flavor. As you might expect, the dominant flavor was orange juice — but, then, many tropical drinks in Minnesota taste like somebody crushed up a handful of Smarties and dumped them in a glass with rum, so this is much better.

After the drinks, I line danced for a while, and I make no apologies for the fact.