We’re at a slow time of year for the arts, to the extent that anything new is performed, or debuted. Arts-related things still happen, of course — for example, both the 501 Club and the Turf Club announced they will be closing in the past few days, the former permanently, and latter temporarily, while it sets up new management. Both are important venues for live music, with the Turf Club itself particularly beloved. The last time it shut down for any length of time, regulars were in tears. The closure of a bar-slash-performance venue in the Twin Cities is treated with the same sort of gravity as the closing of a church.

I played at the 501 Club a few times in the past year, and will miss it, even though it offered a cocktail on its menu that I helped create, and that, for some reason, they mucked up. The drink is called the McQueen, and was mutually created by the editors of a cocktail blog The Bottle Gang, which I cofounded and edited. The drink is simple: Combine one part B&B with one part bourbon in a lowball glass over ice; add a shot of bitters and an orange wedge; stir. Not to pat myself on the back too firmly, I believe it to be a contemporary classic, and it’s also dangerously alcoholic — after a night of drinking McQueens, I have found myself trying to wrestle car keys out of the hands of friends who underestimated just how thoroughly snoggled they were. As a group, we had wanted to create a companion drink called the Paul Newman, and then combine those two and set it on fire, making something we would call the Towering Inferno. We have yet to do so; maybe soon.

The 501 offered a McQueen based on our recipe, but they modified it in some unspeakable way, perhaps because the original drink is sort of expensive, perhaps because patrons were getting far too drunk, or perhaps because of some jejune palate that couldn’t parse the sophisticated savory notes of the McQueen. Still, it’s not often you have a cocktail on a menu that you invented, however degraded it has become, and I’ll miss that.

To fill my time waiting for arts events to resume, I took in two British films last week, both quite good, and one that will certainly be nominated for Oscars. These were “Nowhere Boy,” based on the early years of John Lennon, and “The King’s Speech,” based on King George VI and his stammer. It is the latter that will probably reap Hollywood’s laurels, but let me start by discussing the former. 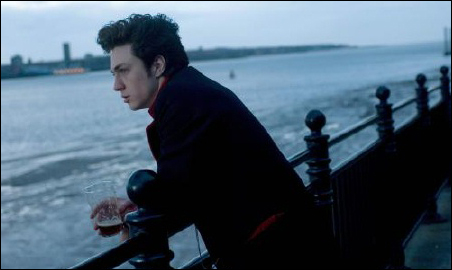 John Lennon is a popular subject for filmmaking — just the past few decades have produced films looking at the singer at the start of his career (“Backbeat,” which begins approximately at the moment “Nowhere Boy” ends), his relationship with manager Brian Epstein (“The Hours and the Times”), his post-Beatle activism (“The U.S. vs. John Lennon”) and his murder at age 40 (“The Killing of John Lennon.”) And this is just a sampling; there have been others.

I remain in waiting for the George Harrison movie, because I am fond of the man, and am convinced that if you took all of Harrison’s original songs off the Beatles albums and released them as one album, it would represent the most consistently fine songwriting produced by the band. And after the Beatles, he produced films by Monty Python and Terry Gilliam, and played the ukulele a lot, and that’s just delightful. But Harrison was the quiet Beatle, and Lennon was publicly creative and publicly tortured, and so he’s immediately and obviously an attractive character.

“Nowhere Boy” finds John Lennon in full James Dean mode, crying out “You’re tearing me apart” to the mother who functionally abandoned him and the stern aunt who raised him. This isn’t a terrifically difficult role to put Lennon in, as it’s sort of the way he saw himself, and he produced two anguished songs about the period, at least: “Julia,” a haunting fantasia about his mother, and “Mother,” a primal scream about the same subject. Lennon was raised in what we’d now call a non-traditional home, and he didn’t like it very much, and when his mother died in a car accident when he was just exiting adolescence, he acted out, turning into a bit of a juvenile delinquent. But Lennon himself later admitted that he was simplifying the narrative too much, and that he had the unique benefit of being raised by an entire family of five sisters, all strong women, all of whom he adored: The Stanley Girls.

“Nowhere Boy,” directed by Sam Taylor-Wood, prefers the simplified narrative, and takes great liberties with history to get it. There are only two Stanley Girls in this movie: mother Julia, who abandoned him, and aunt Mimi, who raised him. Both benefit from lovely performances, Julia played by Anne-Marie Duff, Mimi played by Kristin Scott Thomas. Duff is especially good — she limns her relationship with the adolescent John as somebody who has no idea how to behave around a young son, and so she flirts with him mercilessly, like he was a boyfriend. It’s terribly uncomfortable to watch; you can see Lennon going positively balmy from it.

Lennon is played by Aaron Johnson, who is the sort of young man who looks like a movie star but claims he really wants to be a character actor, and he proves himself here. His most recent film was in the lead role in “Kick-Ass,” and you wouldn’t recognize him at all from that film to this one. He doesn’t look like Lennon, but give him a pompadour, some Buddy Holly glasses, and a black pea coat and he looks like somebody in a very good John Lennon-during-his-art-school-years costume. But he’s wonderfully wounded in this film, and he captures Lennon’s famous wit in its nascent form, when it wasn’t so much funny as it was lacerating. Later on, the costume designer puts him in full Teddy Boy duds — the rock and roll crazed youth culture of early ’60s England — and he looks just dynamite, although Lennon didn’t really start dressing as a Ted until after Julia died, and here they have him doing so before the fact. Filmmakers often claim they must take liberties for the sake of telling a story, but John’s life has moved past biography and into hagiography, and you fiddle with that at your peril. There will always be somebody like me in the audience, noticing that three of John’s four aunts are missing, and tut-tutting when it’s misrepresented.

A lot less is known about the life of George VI, called Bertie by his family and one specific friend. Although he was king of England until 1952, and was father of Queen Elizabeth, he wasn’t really meant to be king, and tried, for the most part, to steer clear of the limelight. Some of this was because he suffered a stammer that made public speaking all but impossible, and this is the subject of “The King’s Speech,” as well as his near-accidental ascent to the throne after his brother abdicated to marry a divorced American from Baltimore, a place that has always produced the most dangerous and disruptive, and therefore most interesting, Americans. 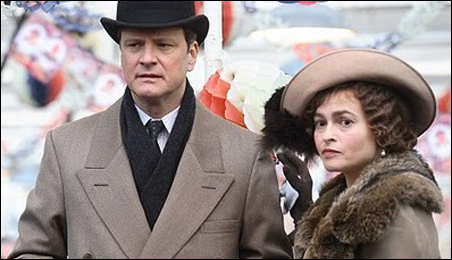 The Weinstein Company
Colin Firth and Helena Bonham Carter in “The King’s Speech.”

If you’ve seen the trailer for the film, you’ve seen the film, but don’t let that stop you from investing the full two hours. The performances are never anything less than great fun, with Geoffrey Rush turning in a typically eccentric turn as the king’s speech therapist, an Australian whose peculiar approach to curing speech problems is treated as being typically antipodean. But no less fun are Colin Firth and Helena Bonham Carter as the unlikely king and his queen. Firth plays his troubled character with a light touch — he’s a doting father and a serious, if rather stiff, government official whose primary means of communications are awkward pauses. But he has a temper, and his meltdowns are strangely impotent for somebody who rules a country: He tends to walk in angry circles, cussing like an amateur and flailing his arms. Carter, in the meanwhile, plays her role as someone for whom the rigorous rules of royal etiquette are both a tool for getting one’s way and pranking somebody else; she has mastered the art of seeming very formal while also seeming like she might be putting one over on you.

The heart of the film is a speech George VI gave on the eve of World War II, and it is presented here rather strangely, as a performance. George VI did not author the speech, and his primary concern is just getting through it, as though it were a performance, which is how everybody else in the film treats it. He doesn’t even seem to have much opinion about Hitler — when seeing the German leader in newsreel footage, he admits that he doesn’t know what he’s saying, but he seems to be saying it rather well.

The film sees its royalty as curiously removed from the real world of politics, which are likewise removed from the real world; the major crisis of the movie is George VI’s older brother, here played by Guy Pierce as a lovestruck ponce, wanting to marry a divorced woman, which will cause a collapse in government. This is just at the moment of the rise of Hitler, and seems a terrifically unimportant thing to be worried about when the shadow of fascism was moving across Europe, but that was how it was. And so it is that the film treats royalty primarily as performers playing roles they have been thrust into (George VI’s father at one complaining that the radio has turned him into an actor) and may be ill-suited for. Geoffrey Rush isn’t so much a speech therapist here as he is a vocal coach, which is fitting, as his character’s background is in theater. There seems to be only the vaguest awareness of what war with Germany might mean. The important thing is for the king to get his lines right and then appear at the window of Buckingham Palace to wave to his audience, like an actor taking his curtain call.