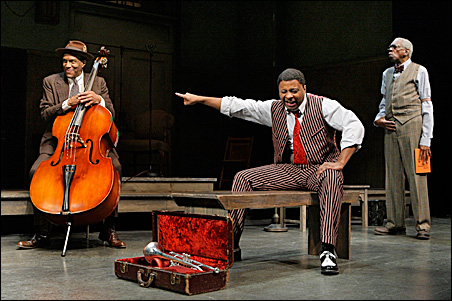 August Wilson left a hell of a challenge behind him when he died six years ago. His work is already thorny, offering an unblinking stare into the day-to-day experience of racism, and the brutal legacy of slavery, and he scoured an entire century for its tales. And, while there is great humanity in his plays, and great sympathy for his characters, Wilson was unafraid to show how racism can warp and twist both its perpetrators and its victims. “Ma Rainey’s Black Bottom,” currently at the Guthrie Theater, does exactly that, and I’ll talk about that in a moment.

A large part of Wilson’s challenge is that he didn’t just write one play about the African-American experience, he wrote 10 of them, his so-called “Pittsburgh Cycle,” which places one story in every decade between 1900 to 2000. They’re very different plays, and they were written over more than 20 years, but they demand to be taken in as a whole — although the stories are disconnected, characters, themes and locations bridge the tales. The result is epic, and, should a theater choose to do one, they’re going to sense the challenge implicit in the project: Do all 10.

Penumbra Theatre, which has about as long an association with August Wilson as anybody, has taken that challenge. In fact it has revisited Wilson so many times in the past three decades that it’s worked its way through the complete cycle — and has produced a few of Wilson’s plays multiple times. Not many audiences have had the opportunity to see this — to the best of my knowledge, only Seattle and Denver have also done the complete cycle.

But Minnesota has a special claim beyond that. After all, it was here that Wilson wrote many of the plays, and there are theater professionals around who were there when the plays were being created, and knew Wilson, and knew him well. So it is that a Penumbra production comes with additional weight. This is not Wilson as told by somebody who is trying to tell his stories for the first time. This is Wilson revisited, by people who have investigated his text for decades. And the telling will be different as a result. This is not necessarily better as a result — there is a lot to be said for fresh eyes. But, because we’re dealing with artists in the Penumbra that share Wilson’s restless, probing intelligence, we’re not seeing a remounting. There’s always something new to find in a good story, if you care to look for it, and Penumbra cares.

“Ma Rainey” is one of Wilson’s earlier works, having been written in 1984, and it shows signs of a playwright who was still finding his language — a difficult proposition, as Wilson had to invent so much of it. And so, while the story superficially tells of a Jazz Age recording session in Chicago, it also tells of the embedded power imbalance of a system in which white producers record black artists to sell to black audiences. And there’s an unmistakable pecking order, represented, very smartly, by the way the studio is set: The white producer and manager peer down at the action from a second-floor sound booth, while Ma Rainey, whose blues records have given her a certain popularity and clout, sits in the center of a ground-floor sound room, glowering in a chair on an elevated platform like a queen who is all too aware of just how ceremonial her power is. 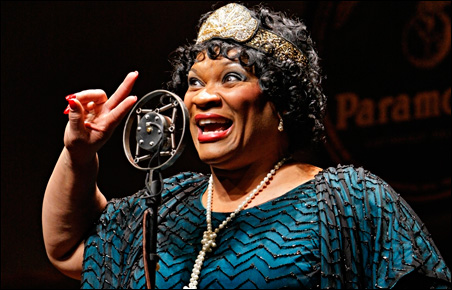 And beneath them, in a basement rehearsal space, is Ma Rainey’s band. They do the most work — they arrive well before Rainey, rehearse her songs, arrange them, and teach her stammering nephew how to do a spoken-word intro — but have the least power of all. And it is with them that Wilson sets most of the play’s action. And, because he wants to use them, in part, as a device for discussing race, they sometimes have that discussion rather nakedly and artlessly — it is as though the play had stopped and the characters had turned to the audience and said “Here’s how it was … .” In later plays, Wilson would integrate these discussions into his text with a more practiced hand. But, then, race often seems to be among the most undiscussed subjects in the United States, and there is something astonishing about hearing the subject discussed so frankly.

So let us discuss the Penumbra version, and we’ll start with the set, because it is so much a character in the play that it should have received its own billing, and dressing room, and Equity cot, in case it was exhausted and needed to lie down between scenes. It’s a careful construction by scenic designer Vicki M. Smith, looking very much as though somebody had grabbed a cross section of an actual Chicago building, and a rather derelict one at that — the building has obviously been jury-rigged to serve as a studio. Director Lou Bellamy opens the play by having the studio’s owner, played by Michael Tezla, walking through the space, checking cables and setting microphones. He does this for quite a while, and this is something Bellamy likes to do, especially with Wilson plays. Because the set not only contains the action of the play, but comments on it, Bellamy gives the audience the opportunity to explore it before the action of the play begins, to experience it as a real, working place.

Eventually the band files in and heads downstairs, where we will spend most of the play’s action as they rehearse, and kid each other with the easy camaraderie of men who have worked together for years. Mostly. There is one musician who is younger, and relatively new to the group, and sometimes reacts badly to the band’s teasing, and sometimes fights with them. Ballamy has mostly cast the band with longtime collaborators from Penumbra, including founding members James Craven, who rattles off his dialogue with quick, nervous energy, and Abdul Salaam El Razzac, who spends much of the play with his nose buried in a book, firing off ripostes masquerading as folk wisdom, and vice versa.

Bellamy has wisely cast a Chicago-based actor, James T. Alfred, as the new member, Levee. While Alfred has appeared at Penumbra before, the other band members display a sort of comfort with each other that genuinely feels the result of having constantly worked together for years, while Levee genuinely feels like a bit of an interloper. He’s flashy, wearing expensive clothes that the others find a bit comical, and he’s ambitious, which the others have mostly abandoned. He’s also wounded, both literally and in his soul, and it is on these wounds that the play turns.

Ma Rainey herself, played by Jevetta Steele as a character who can turn her anger on and off like a tap, when it suits her, is actually a bit of a supporting character here — she comes in well into the action of the play and disappears for long stretches of it. But she’s wounded as well — perhaps because her success has given her a few bargaining chips, she’s acutely aware of just how little power she has. So she wildly abuses it, in part out of spite, and in part out of fear that if she doesn’t exercise it constantly, she’ll lose it. Although her role is minor, her character offers some of Wilson’s keenest insights into how, in an environment where people cannot meet as equals, every interaction becomes loaded with that inequality, and every gesture seems to reflect it.

Everybody responds to her as though she were an unbearable pain in the ass, and reacts to her outrageous demands with the exasperation of people who have experienced them a thousand times. But they respect her, all of them, both those above her, in the soundbooth, and those below her, in the basement. And respect from either group is hard won.