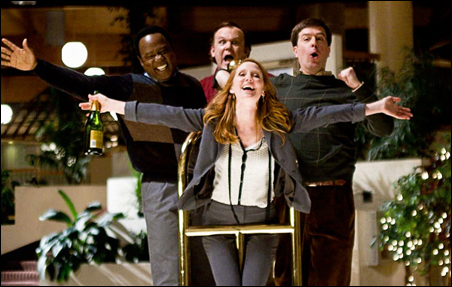 I am going to talk in a moment about the film “Cedar Rapids,” which was written by Phil Johnston, a former Minnesotan and reporter for KARE11. But the film was produced, in part, by Alexander Payne, and has his imprimatur stamped on it, to a certain extent. And so this gives me a chance to tell my Alexander Payne stories, of which I have three, although all three are essentially the same. Payne hails from Omaha, Neb., and set three of his films, in part or in whole, in the town. I lived there for six years, and interviewed him a few times for the local newsweekly, and that’s usually it, as far as things go between a newspaperman and a film director.

But Omaha is too small a town for that to be the case. And so it was, as a result of having friends in the cast of “About Schmidt,” that I crashed Payne’s wrap party for the movie, which I was told was also his birthday party. Which leads to:

Story one: The party wasn’t much of a scene — mostly local actors with bit parts enjoying some hors d’oeuvres, sipping cocktails, and chatting amiably. But Payne was there, holding court. I passed him as I left the party, and extended my hand. “Happy birthday!” I said.

He took my hand and narrowed his eyes at me, searching my face to see if I was joking. “It’s not my birthday,” he said.

“Well, you’ll have a birthday at some point,” I said. “Imagine this is then.”

At some point during the meal, somebody asked Payne about his next film. He began to describe “Sideways,” which, according to him, was about two friends, one of whom is about to get married, who take one last road trip.

I interrupted him, thinking of the black comedy “Very Bad Things,” which starts with a similar premise. “They shouldn’t kill a hooker,” I said. “That’s already been done.”

He stared back at me, bewildered. “Why would they kill a hooker?”

I will point out now that at no time during “Sideways” do Paul Giamatti or Thomas Haden Church kill a hooker. They don’t even entertain the possibility. I’d like to think I had something to do with that.

Story three: There’s this fellow, Jim Crotty, who is better known as Jim Monk, and coproduced a magazine called “Monk” in the ’80s and ’90s that was quite hip in the counterculture. Jim hailed from Omaha, where I knew him from, but lived in Los Angeles, where Alexander Payne knew him from. So when Jim returned to Omaha, Payne let him stay at his apartment there. And so it was that Jim gave me the phone number to Payne’s apartment, so I could call him.

I made several calls and left messages. One afternoon, my phone rang. I answered.

“Max, this is Alexander Payne.”

“Do you know that you have been calling my cell phone in Los Angeles and leaving messages?” he asked.

“I thought I was calling your apartment in Omaha,” I answered.

It had seemed a little odd.

So, anyway, “Cedar Rapids.” You may already have heard about the film, but, if not, here’s a thumbnail of the plot: A middle-aged insurance salesman (Ed Helms) from Wisconsin goes to Iowa for a convention, meets a collection of misfits there, has some adventures, and is changed by them. It’s currently playing at the Uptown, and it often has the feel of an art-house film — the whole of it is saturated with a melancholy and unforced awkwardness that Payne typically injects into his films. This is especially true of Helms’ character, who is exceptionally ill-at-ease with his own emotions, which tend to overwhelm him quite suddenly and embarrassingly. At one especially stressful moment in the film, he just lets out a frustrated squawk, and it’s not a noise made by a man who has a firm foothold in dignity.

At the same time, the film is cast, and to an extent written, like a Will Ferrell film. John C. Reilly, in particular, plays a loudmouth fellow insurance man with mannerisms that seem informed by the roles he played in “Talladega Nights” and “Step Brothers.” That is to say, he plays an adult who seems locked in a perpetual state of late adolescence, who treats the insurance conference as a high-school party he is crashing. And while the plot is enjoyably ragged, the conclusion is as tidy — and as forced — as anything you might find in a Ferrell film, which at least feel as though they may be mocking such endings.

That being said, this pairing of tones — art house plus frat pack — generally works quite well. The film is full of ingenious little details, such as its casting of Isiah Whitlock, Jr., who is best known as the thoroughly corrupt state Sen. Clay Davis from HBO’s “The Wire.” His primary claim to fame is that he managed to take a one-syllable epithet and, over the course of the show’s five seasons, stretch it out to epic proportions, to such an extent that the final episode could very well have been Clay Davis saying that one word, one time, for the entire hour. But where Clay Davis was a consummate flimflam man, his character here is a square, albeit one, as it turns out, with a passion for HBO’s “The Wire.” This gang of misfits is rounded out by Anne Heche, and it’s easy to see in this film why both Steve Martin and Ellen DeGeneris found her irresistible. She’s entertainingly quirky, and, when she’s a bit drunk and decides to turn on her “come hither” look, unexpectedly magnetic.

There is a moral conundrum at the center of “Cedar Rapids,” but it’s a bit of a MacGuffin, as Hitchcock would say, in that it’s really a device to force Ed Helms’ character to finally grow up. And this is fine in a lowbrow comedy, where the storyline is really just a frame on which to hang a series of gags. But this film feels like it wants to be closer to an art-house picture, and wants us to really invest ourselves in its characters’ development. And certainly we can all have defining moments in our lives, where circumstances force us to mature. But, although these definitive moments may be brief, the process that follows never is, and what art-house films often do well is show just how protracted and belabored the process of growing up really is.

“Cedar Rapids” doesn’t give us that; it gives us the lowbrow version, in which a single instant can turn a child into an adult. And that’s fine, as the film has a lot of undeniable lowbrow pleasures, not the least of which is Reilly’s outrageous, boorish performance. But at least in Will Ferrell’s films, while his characters might mature as a result of the climactic action of his film, they don’t mature very much. 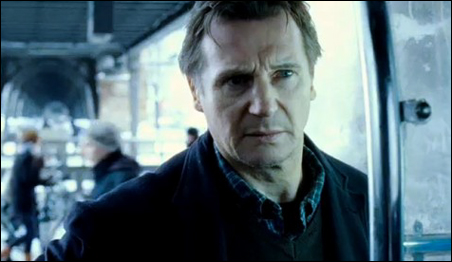 Speaking of Hitchcock, I’m going to spend two paragraphs on one more film, because it’s a Liam Neeson film and I always see his movies. The film is “Unknown,” and that’s exactly the wrong title, as the film explores a Hitchcock premise but accidentally gives away its big reveal in its trailer. The story is about an American doctor in Berlin who wakes up from a coma to discover another man has taken his place. And the first half of the film is pretty fun, especially as the director, Jaume Collet-Serra, likes to borrow a specific Hitchcock technique — tilting the camera back and forth whenever Neeson feels a bit out of sorts, which is often.

But I went in wondering if this is the sort of film that’s worth watching when its big twist has already been blown — some are some films that can, especially those by and inspired by Hitchcock, “Psycho” and “The Crying Game” notable among them. But this one can’t. It is, instead, a film about how Hitchcock’s devices fail in the wrong hands, and the biggest failure of this film is January Jones of “Mad Men.” Sure, she looks like a Hitchcock blond, but they were typically scrappy and engaged by the story. Jones looks as though she had to be nudged awake before every shot and drifted to sleep while being filmed. And if one of the movie’s stars can’t be bothered to be excited by the film, why should we?