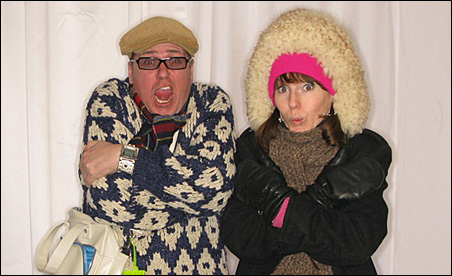 With the party. The exhibit debuted with a late-night affair, part of the Walker’s ongoing “After Hours” events. They had what you would want at a party: A deejay, Jake Rudh, who legitimately got people dancing; an artsy and crafty activity, which I did not do, but seemed to consist of making something out of the sort of folk art material you find at Michaels; appetizers that were supposed to be sort of Minnesotan, at least as Wolfgang Puck’s people understand “Minnesotan” to be (some sort of upscale hotdish); a performance, which I will detail, and a cocktail, which I will detail, and a costume contest, which I will detail. 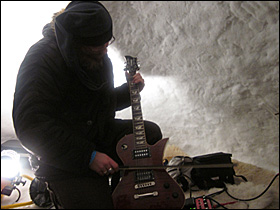 MinnPost photo by Max Sparber
Performance in an igloo

The performance: An artist named Sean Connaughty built something he calls a bigloo, which looks, to my untrained eye, like an igloo. It was just big enough to house three or four guests, who had to crawl in through a tiny tunnel. Inside, somebody was playing ambient electric guitar through a collection of effects boxes — I am given to believe it was Connaughty himself. People stood around the exterior of the bigloo, confused by it, and occasionally intrepid people would drop to their knees and crawl in for a few minutes, where they discovered the guitar, the player, and a rather cheery couple who seemed determined to remain in there for a while, chatting amiably with anybody who entered.

The cocktail: The drink itself, dubbed the Apple Uff-Da, wasn’t terrific: It consisted of Prairie organic vodka, apple juice, and a cinnamon stick. It tastes like rubbing alcohol at first, and then weak apple juice, and then cinnamon, a bit like Willy Wonka’s Three-Course Dinner Chewing Gum, except that none of the courses were all that spectacular. But the presentation was: The Walker set up an ice bar outside, with an “ice luge” on either side, which were holes in the ice through which they poured the vodka, so that it dumped out into your glass after having both been chilled and been on a bit of an adventure. 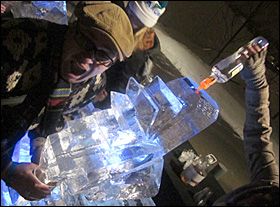 The costume contest: All the Walker requested was that you wear a sort of typically Minnesotan sweater, which they then photographed. Not many did — maybe one in five. But the sweaters were the sort of eye-frenzying clot of colored wool that can only be worn by somebody with no sense of irony at all or too much of a sense of irony. I don’t like to not participate, so I got myself some awful thing that looked like it was made up of a succession of occult blue eyes of Horus. It scared me, and probably scared everybody I met.

With the party out of the way, let’s discuss the show itself. As I understand it, this is the first that is primarily curated by Darsie Alexander, who arrived in September of 2009 from The Baltimore Museum of Art and was immediately struck by how different Minnesota is from Maryland. And so we have a show that starts with the idea of regional vernaculars, in the architectural sense — structures that make use of local materials to create buildings that suit local needs. This is all a bit metaphoric — there is very little actual architecture in the show, which is, instead, focused on how artists will draw from mass culture to create a sort of idiosyncratic artistic vernacular that suits their own biographical or intellectual needs.

There is, I should mention, a somewhat architectural structure at the entryway to the show, a covered bridge propped up on stilts that patrons are invited to go into, one by one. The piece was created by local artist Chris Larson. The bridge is a bit of an optical illusion — it makes subtle use of forced perspective, so the bridge is actually smaller in some places and larger in others, which gives you the puzzling sense that you may actually be getting bigger or smaller depending on where you stand. It also seems to cantilever right through a Walker window and on to the outside, which, at a press event for the exhibit, turned the piece into an accidental prank — somebody tried to follow it to the end, banging against the window. The Walker has since put colored dots on the window to let you know where to stop walking.

The exhibit has one piece that is inevitably going to be a showstopper, a video by Marina Abramovic from 2005 called “Balkan Erotic Epic: Exterior Part 1 (B)” that consists of the artist, in a traditional Balkan folk costume, obsessively massaging her exposed breasts. “Anyone who sees this material bursts out laughing,” the artist says in her notes, but Darsie Alexander told us that it’s all anybody at the Walker can talk about in the elevators. She further explained that Abramovic had discovered a number of ancient Balkan fertility rituals that mostly consisted of people waving their naughty bits obscenely at the sky, and so decided to make a video of it. And of course she did. It’s the sort of impulse one wishes everybody would share. 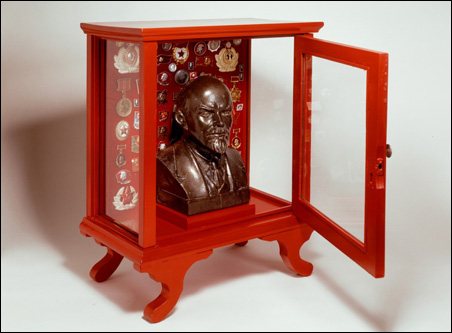 Image courtesy of the artist
Reliquary by Jeffrey Vallance

The show isn’t kidding when it uses the word “spectacular” in its title, and not just because of Abramovic’s video. Many of the pieces have the capacity to astonish. I was especially struck by several pieces by Jeffrey Vallance, who creates complex games for himself, then saves pieces of them, which he embeds in antique-looking reliquaries. All are fascinating, but the most jaw-dropping example is one called “Bloody Blanket (Performance Relic),” which actually documents an unexpected death the artist witnessed.

Usually, at an exhibition, there are only one or two pieces I want to talk about, and I sort of turn them into the show’s heroes, having them represent the show as a whole. But I could happily discuss almost every piece in this one, and unhappily don’t have room to do so because somebody had to go and spend half their column prattling on about a party. So I’ll just mention one more piece, or, more properly, series of pieces by Jim Shaw, called “Paintings Found in Oist Thrift Store (Fantasy Oism).” In fine-art circles, Jim Shaw is a bit of a provocateur, having created a show in 2000 in London that didn’t contain a single piece he created, but instead a collection of paintings he found in thrift stores. They were, in the words of critic Adrian Searle, “awful, indefensible, crapulous.” He was also a founding member of the protopunk band Destroy All Monsters, which won’t mean much to those of you who have never heard of them, but, for those who have, it’s like discovering Paul Klee used to play trumpet with Louis Armstrong. 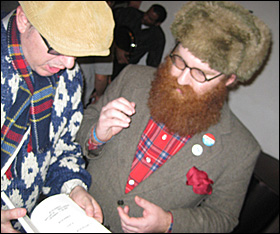 His Oist thrift-store pieces, as their name suggests, is a sort of continuation of his London show. Except Shaw has more that just a curatorial hand in this one. You see, there is no Oist thrift store — Shaw just made it up, and well as the cult behind it, Oism. And so the paintings in this series are decidedly apocalyptic, often showing a city attacked by an octopus, or people protesting or rioting in the street. All have a decidedly, and weirdly, occult quality — one shows a named man walking through a darkened desert town at night, clouds of dust rising behind him, and he seems to have no feet — his legs end in stumps, as though he had actually walked his feet off. And Shaw didn’t paint these either — he directed his studio assistants to do so, many of whom had the same sort of unskilled painting talents as the thrift-store painters Shaw had previously assembled.

There’s also a book that accompanies the exhibit, and it’s gorgeous. I was delighted to discover a friend of mine, local writer and curator Andy Sturdevant, had contributed an essay, and he was delighted to offer to sign it, as he had never done so before. So at the party I handed him a pen and he wrote “To Max (aka Bunny), a wizard — a true star.” I can’t shake the feeling we were subtly teasing each other, but I was distracted by my own sweater, which seemed to be glaring at me.

A ‘bigloo’ and Balkan fertility: ‘The Spectacular of Vernacular’ at the Walker