Brecht is too much to write about. I wish people would remount plays like John Patrick’s “The Curious Savage,” which is a bit like “Auntie Mame” blended with “One Flew Over the Cuckoo’s Nest” and became unaccountably popular in 1950. Now there’s a play a writer can get a handle on in a few hundred words. Heck, I think I may have just said everything about it that needs to be said.

But Brecht? Brecht? He’d be hard enough to tackle on his own terms, with his restless intelligence and his searing wit, but he didn’t just create scripts, but entire theories of theater, and his plays don’t work all that well unless you’re familiar with his theorizing. Further, he wrote under the creeping shadow of European fascism, and responded to it with frenzied, astonishing work that still ranks among the most challenging of the 20th century. And here we are, in the next century, and that shadow still creeps. Even when we’re not dealing with jackbooted thugs, the impulse for fascism falls over our souls, and we must constantly be reminded of what it looks like, so we don’t mistake it for a noble or harmless reflex. 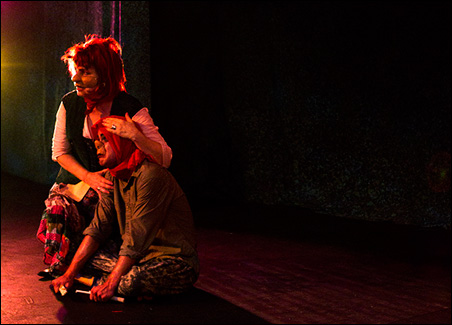 The Bricklayers
“Mother Courage and Her Children” at The Lab

And so there’s “Mother Courage and Her Children,” which poured out of Brecht over five weeks when the Nazis entered Poland, and which Oskar Eustis of the Public Theater has declared the best play of the 20th century. The play has a deceptively simple structure — it tells of a war profiteer who follows soldiers during the Thirty Years War, selling them overpriced provisions even as the violence kills her own progeny. But Brecht wrote with a hand that seemed wrapped in barbed wire, and while he never let down his trademark scorched-earth wit, his dialogue sometime seems like it may have the ability to draw blood. “I won’t let you spoil my war for me,” Courage cries out at one point. “Destroys the weak, does it? Well, what does peace do for’em, huh? War feeds its people better.” Ah, irony. Ah, agony.

I can’t even begin to tackle this play, and so shan’t, but I can discuss its current incarnation, a collaboration between Chicago’s Bricklayers theater troupe and a Parisian maskmaking collective called Collectif Masque, in town thanks to the co-sponsorship of the Bedlam Theatre and Open Eye Figure Theatre, playing now at the Lab Theater. It’s an ambitious undertaking — “Mother Courage” always is — and it has some terrific qualities, not the least of which is Barbra Berlovitz in the title role. But it’s also an especially challenging production, and I can’t be sure if that challenge is intentional or is because the Bricklayer company is relatively young and not in, er, full possession of its instrument, as they say.

It’s a long play, and oddly broken up — the first act winds on for one hour and 40 minutes, while the second act speeds by at 45 minutes. And the company has a deliberately presentational style of performance, directing most of their dialogue directly at the audience, which Brecht would have liked, as he always wanted audiences to be aware of their own presence in a theater. But it is done so much that it sometimes seems as though the performers have forgotten about each other onstage. And many of the performances are primarily caricature, and very broad caricature, and perhaps this is what Brecht would have wanted as well, as he wanted audiences to know that they were watching an actor putting on a performance. Brecht was very fond of something he called the verfremdungseffekt, which is often translated as “alienation,” a non-literal translation that gets scholars into a snit, as they point out that Brecht wasn’t seeking to alienate his audience, but instead engage the audience as a critical observer.

But some of the Bricklayer’s decisions are genuinely alienating. With their exquisitely made but often grotesque masks, which call to mind barnyard animals or the distorted faces of soldiers who have been gassed, and with their exaggerated characterizations, you sometimes don’t feel like you’re watching a play, but a very puzzling Loony Tunes cartoon, or the weirdest “Muppet Show” episode ever filmed. Which has its own pleasures, but also risks being a bit much over the course of three hours.

But, if you feel up to the challenge, it’s worth it, not the least for Berlovitz’s performance. She is undeniably in control of her instrument — in a lot of ways, her training in physical theater and clowning, and her years with the Theatre de la Jeune Lune, has made her the ideal actor for this production. Her performance is never less than human, and humane, and she respects what Brecht wrote into Courage — that this woman isn’t a villain, but a survivor, and that survival under fascism often requires impossible sacrifices and unforgivable moral transgressions. She’d be sympathetic, even, were it not for the presence of the show’s other standout performance, Taylor Bibat as her mute daughter, Kattrin. She watches the whole action with sideways glances that are at once heartbroken, murderous and hideously aware. She’s been abused and disfigured by Courage’s decisions, which Courage blithely makes light of, but Kattrin is also culpable, as she has survived because of them. At the play’s climax, it is Kattrin who engages in a single, simple act of heroism. But, this being Brecht, it is quickly ended and swallowed up, and war continued, as Mother Courage continues, and so it goes. 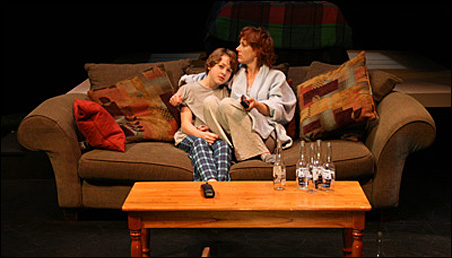 Photo by Kevin McLaughlin
“Little Eyes” at The Guthrie

Cory Hinkle’s new play, “Little Eyes,” produced by a local collective of playwrights called Workhaus and currently onstage in the Guthrie’s Dowling Studio, also navigates the tricky, and sometimes broken line between character and caricature. Set in the months following 9/11 in a small American town that’s ahead of the curve, in that it’s already failing, Hinkle’s script has three sets of characters who form a continuum from realistic to absurd. There is a young mother whose husband just up and left, played by Sarah Agnew, who limns her character as believable stunned. Then there are the next-door neighbors, Steph and Mark, played by Maggie Chestovitch and Adam Whisner, who sleep under a painting of Jesus and have looping, nonsensical arguments with each other while Steph pretends to be pregnant by stuffing a pillow under her shirt. Finally, there is a large, loud-talking stranger in a cheap suit and an old camera, played by Luverne Seifert, who claims to represent the mayor and whose photography is bullying and occasionally sinister.

Each of these three groups could exist very comfortable in their own play, but Hinkle thrusts them into each other’s, where they bewilder the other characters, and risk bewildering the audience. The play is filled with signs and portents that seem meaningful but go unexplained, and the entire production is spotted with moments of bleak satire. It’s a play that refuses to explain itself, and the audience must not merely suss out the subtext, but some of the text. It’s very hard to tell whether this is a careful piece that made some commendable, albeit risky, decisions to challenge its audience, or if it’s an impulsive piece that relies on freighted hinting and glib suburban surrealism in the place of telling a story. Most of the local critics have so far assumed it is the latter. I’m not so sure.

The broken line of caricature: ‘Mother Courage’ and ‘Little Eyes’