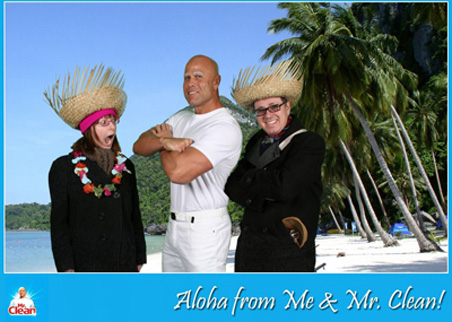 I don’t know what percentage of Twin Citians have never been to the Mall of America. There used to be a figure that was bandied around, and I can’t remember what it was, but it was something preposterous. 60 percent? Something like that.

I’m tempted to say this is the number of people who lie about going to the mall, but maybe it’s so. I can understand why some might find our megamall unappealing. It’s very crowded, for one thing, and, because it has a Nickelodeon-themed amusement park smack dab in its middle, a lot of that crowd consists of children. Unless you’re one of those people who finds tiny, insane humans adorable, other people’s children are going to tend to be annoying. So there’s that.

And it’s a monument to consumerism, and some will rankle at that. Few of us actually reject consumerism altogether, but people from the Twin Cities, and Minneapolitans in particular, tend to get a little precious about the subject. They’ll only eat veggies that grew within seven yards of the restaurant. Furniture can come from further away, as long as it’s Danish, and modern. But the Mall of America consists mostly of national chain stores. Sometimes it seems like there is an entire floor dedicated just to Victoria’s Secret. Well, the secret is out: It’s underwear.

But I love the mall, and I’m here to offer a defense for it. I’m not much of a shopper, and, because I have the dietary restrictions of one of those overly sensitive and morally compromised heroes in a story by Edgar Allan Poe, there is not much I can eat there. There aren’t many places at the Mall that make a good cocktail, and the movie theater there is both more expensive and less entertaining than the one at Block E. So what on earth do I see in it?

Well, I’ll tell you. The Mall of America has revived something that I think, in general, has been lost elsewhere. It used to be that you could just wander around an American city and have an adventure. You wouldn’t have to spend any money, and you wouldn’t have to make any plans. You’d just go out your door and something would happen. Some cities still have this: New Orleans, for example. But, for the most part, Minneapolis and St. Paul don’t. Certainly not St. Paul, unless you consider being alone in a downtown but for 100 Snoopies to be an adventure.

You may protest that the Mall of America is not a city, and you’re right. Nobody actually lives at the mall, and won’t until they finally attach that hotel they’ve been talking about. But the mall gets somewhere in the vicinity of 250,000 visitors per day on weekends, and has another 11,000 employees. That makes the Mall of America, by capita, the third largest city in Minnesota, if it were a city. And, for the sake of this article, we’ll pretend it is. And what happens in this particular city if you don’t want to spend a lot of money? 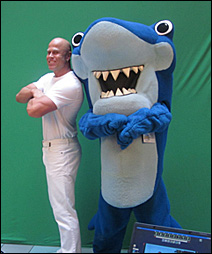 Well, plenty, actually. As an example, this past Saturday, I met Mr. Clean. Now, I know he’s just a drawing on a cleaning product, but Procter & Gamble have hired a very tall, very muscular, very good looking bald man to play him. They’re promoting some new cleaning product, and so they sent him to the Mall of America to take photographs in front of a green screen with whoever wanted a picture. I did, as did my girlfriend. As did Sharky, the mascot for Underwater Adventures, the aquarium at the basement of the mall. Sharky stood in line, just like everybody else. Well, sort of. He spent most of the time in line on his knees, hands pressed to his face, as though he was prostrated by excitement and amazement. When he met Mr. Clean, they greeted each other warmly, which I presume is the way with professional mascots.

And this was just in one corner of the mall. In the main atrium, the Minnesota Lottery had set up. They sold tickets to mall visitors, who traded them in for a spin of a wheel, which netted them Vikings swag, or a chance to go into a plastic box and grab at dollar bills that were blown around them. And elsewhere in the mall, a catwalk held dozens of teenagers, each representing a different school, participating in some sort of fashion show.

And this is always how it is at the mall. I went a few months ago and there was some generic boy band sitting in the atrium, mobbed by excited children. Just down the hall from them was Rick Springfield, who enjoyed a pop hit back in 1980, and had released a book, and was mobbed by a much smaller group of middle-aged women. I wanted to talk to the members of the boy band, to tell them they should head down the hall and talk to Springfield, as he probably has some stories to tell them. I also felt it might be useful for them to know that the prepubescent who cheered them today would eventually turn into Springfield’s middle-aged fan club, and there’s actually something nice about the fact that their audience will grow up with them, and will still be there for them long after the hit records have faded into rock trivia.

I have seen some lovely things at that mall atrium. I know — Mr. Clean was there to push a product, and there’s something a bit tacky about that. But I was there on Cinco de Mayo, when the mall filled its atrium with mariachis, and they weren’t there selling anything. They played trumpets and violins and guitarron as some in exquisite charro costumes danced, and a large audience watched appreciatively. 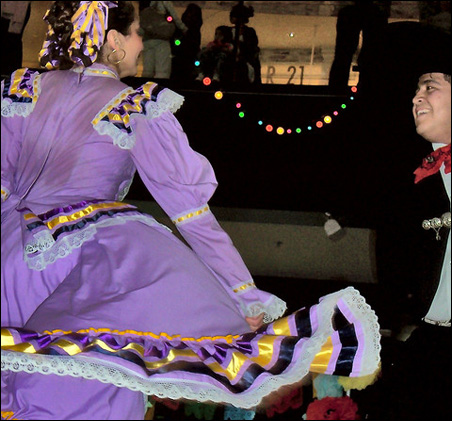 MinnPost photo by Max Sparber
Mariachis at the Mall of America

This Saturday, I also went behind the scenes at Underwater Adventures, which wasn’t free, like Mr. Clean, but wasn’t expensive either. A guide shows you the aquarium’s lab, where they make sure their animals are healthy. There they were drying a shark’s fin and tail, which, I was told, turned out to belong to an enormous sandtiger shark named Jesse, who was something of a legend in her time. She was named for our former governor, Jesse Ventura, and was notorious for occasionally taking bites out of other fish — here’s a video of Jesse happily swimming around with a white tip reef shark lodged in her mouth. But sharks don’t live forever, and apparently Jesse’s time was up, and there were pieces of her, right by me. I felt like I had stumbled into a celebrity autopsy!

We also looked into the aquarium’s kitchen, which is apparently the cleanest at the Mall of America, which is only encouraging if you have a hankering for raw squid. And then we went above the aquarium’s tanks, looking down into them. It’s the opposite of what most visitors see at the aquarium, as they walk through a tunnel that goes through the tanks, and must look up to see the fish. This is quite impressive, especially if you’ve seen that Dennis Quaid version of “Jaws” where a similar exhibit collapses, dumping millions of gallons of water and one murderous great white upon visitors. But, from above, the size of many of the fish becomes truly impressive — they aren’t distorted, as they are when seen from underneath, and they are astonishing, many of them them larger than a man, gliding around silently and effortlessly beneath our feet. Sharky, the mascot, was nowhere to be seen. Perhaps he was having drinks with Mr. Clean and trading mascot war stories. 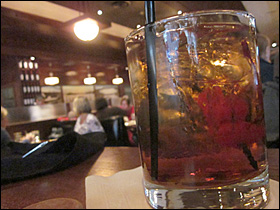 Speaking of drinks, there is at least one place in the mall that pours a good cocktail. The Twin Cities Grill has never poured me a bad cocktail, and I’ve had quite a few there. It’s a good-looking place, with walls made from a cherry-stained wood and hung with old photographs of Minneapolis and St. Paul. They pipe classics from the American jazz songbook while you eat or, in my case, drink. I used to get Rob Roys there, which consist of scotch, sweet vermouth, and bitters, and I quite liked them, but it’s not listed on their chalkboard cocktail menu anymore. I’m sure they can still make it, but they listed something called the Minnesota Manhattan, and I thought I’d give that a shot. The Manhattan is an almost identical drink anyway, except made with rye whiskey or bourbon instead of scotch. This one is made with Maker’s Mark, which is a very good bourbon, and they made it very well. It’s a bit pricey, but they give a tall pour and it’s nothing but liquor. As much as I like the mall, it’s not a bad idea to take a little break after a while, enjoy a well-made drink, and brace yourself for more adventures.

In defense of the Mall of America